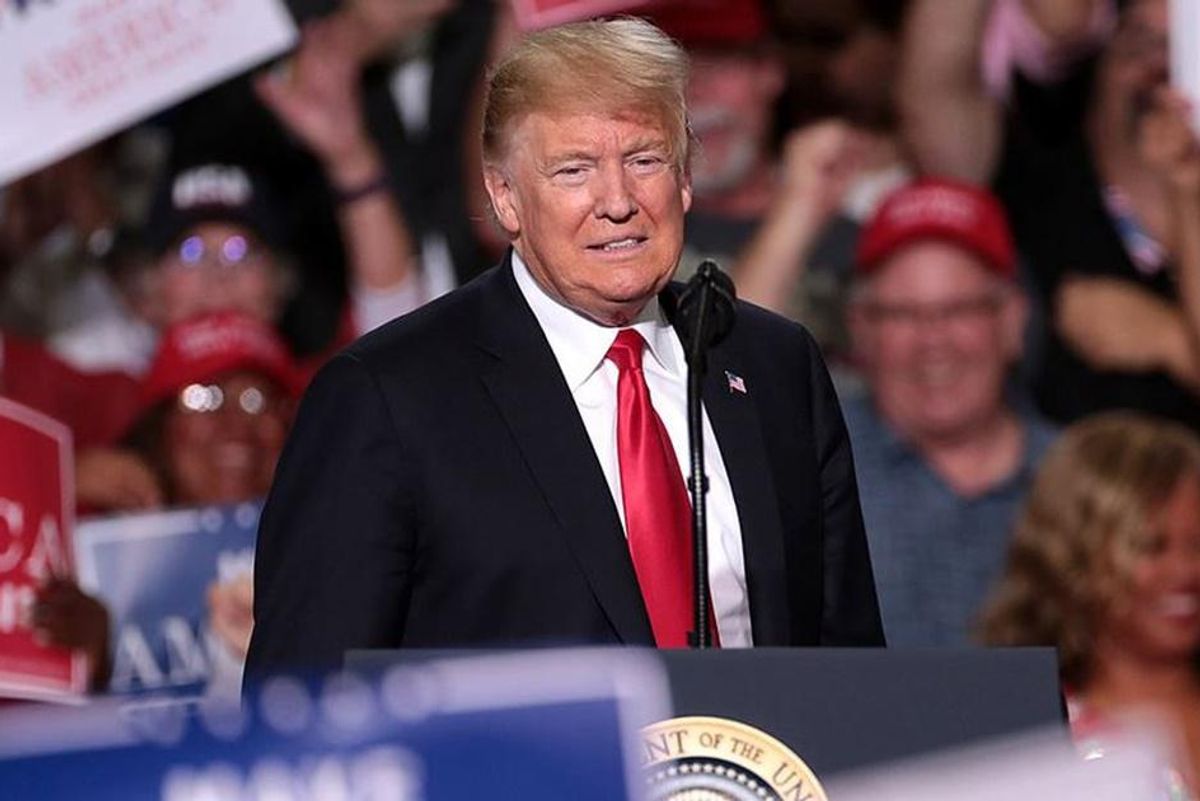 If Donald Trump decides to run for president in 2024, there's a good chance that he'll win the Republican nomination. A recent survey from the John Bolton Super PAC found that 46% of likely general election voters would back Trump being the party's nominee.

Trump's latest fundraising figures show that he has a whopping $102 million war chest to finance a run in 2024.

Trump's former chief of staff Mark Meadows said that the former president recently met with "cabinet members" to discuss his political future and that they're "moving forward" in a "real way."

Mark Meadows from Bedminster: “We met with some of our Cabinet members tonight .. I can tell you this. We wouldn’t… https://t.co/QlHSTUpwrh
— Ron Filipkowski (@Ron Filipkowski)1627684795.0

It's hard to believe that a president who inspired an insurrection at the Capitol building and did everything he could to overturn the results of an election could still have a single supporter, let alone tens of millions.

Shouldn't there be a law that prevents people who attack the very fabric of American democracy from having the honor of holding its highest office? Fox News contributor Juan Williams believes there is a strong legal case to deny Trump the ability to run again.

Williams is a liberal outlier at the news outlet and was a regular co-host on Fox's "The Five." He stepped down from the role on the show earlier this year after contracting COVID-19.

In an op-ed for The Hill, Williams makes the case that Attorney General Merrick Garland can prevent Trump from running again by invoking Section 3 of the 14th Amendment which bars anyone from holding office who "engaged in insurrection" against the U.S.

No Person shall be a Senator or Representative in Congress, or elector of President and Vice-President, or hold any office, civil or military, under the United States, or under any State, who, having previously taken an oath, as a member of Congress, or as an officer of the United States, or as a member of any State legislature, or as an executive or judicial officer of any State, to support the Constitution of the United States, shall have engaged in insurrection or rebellion against the same, or given aid or comfort to the enemies thereof. But Congress may by a vote of two-thirds of each House, remove such disability.

Williams cites three actions by Trump that prove he engaged in insurrection.

He tried to hamstring acting Attorney General Jeffrey Rosen into saying the election was "corrupt."

"Just say the election was corrupt [and] leave the rest to me and the [Republican] congressmen," Trump told Jeffrey Rosen, then the acting attorney general, in a December phone call.

In the weeks before that call, Trump also pressured his Attorney General William Barr to do the same. "We realized from the beginning it was just bullshit," Barr later told ABC News's Jonathan Karl.

The former president also tried to get Georgia's secretary of State, Brad Raffensperger to "find" him votes to help him win the state.

"So, yes, there is a case to be made that Trump committed crimes against America," Williams wrote.

In a recent op-ed for The Washington Post, lawyers Laurence Tribe, Barbara McQuade, and Joyce White Vance urged Garland to block Trump from running again. "The bottom line is this: Now that Trump is out of office, the DOJ's view that sitting presidents cannot be indicted no longer shields him. Attempted coups cannot be ignored," they wrote.

"If Garland's Justice Department is going to restore respect for the rule of law, no one, not even a former president can be above it," the op-ed continued.

When Donald Trump was elected president he swore to "preserve, protect and defend the Constitution of the United States." His failure to do so should not only make him an unworthy choice for the American people but disqualify him from having the opportunity in the first place.

Williams makes a compelling argument that that Trump is legally ineligible to run again.

"Yes, Garland has the power to stop Trump from running again," Williams wrote. "It is time to use it."