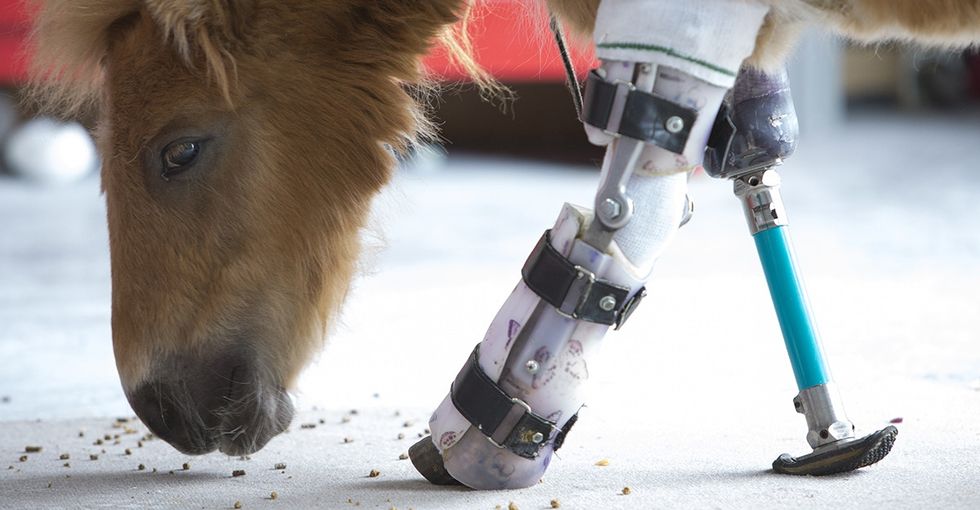 Mosha, a work elephant, was carrying heavy logs on Thailand's border with Myanmar when she stepped on a land mine.

Mosha survived. But she lost a leg.

On the Myanmar side of the border, Motala, another work elephant, stepped on a land mine too, suffering a similar fate.

The injuries could have meant death for them both, especially Mosha whose unbalanced walk threatened her spine. Luckily, the Asian Elephant Foundation knew someone who could help these two wounded animals: Derrick Campana, an animal prosthetic expert.

Campana casts a mold of Mosha's leg before helping to make her prosthesis. Image via Cody Cutter, used with permission.

Mosha was the first elephant to ever receive and successfully use a prosthetic leg, so there wasn't a how-to book for this job. But Campana was able to cast a mold and size Mosha and Motala for prosthetics — just as he has done for thousands of other animals.

Campana and Mosha. Image via Cody Cutter, used with permission.

It has been more than a decade since Motala and Mosha were injured, but thanks to Campana's help, the pair have been able to live happily at the Friends of the Asian Elephant Foundation, which is the world's first elephant hospital.

As one of the only manufacturers of animal prosthetics in the world, Campana has been able to help tens of thousands of animals — and not just elephants.

Campana and one of his patients sporting a new prosthesis. Image via Animal OrthoCare/ACC/Ezra Gregg, used with permission.

But Campana didn't actually start out as an animal prosthetist — he used to work on humans. That is, until a veterinarian brought Charles, her chocolate lab, into his prosthetics and orthotics practice.

Campana thought it strange at the time that someone would bring their dog into a practice meant for humans. But he ended up building a successful prosthesis for Charles, and in the process, he realized how few options there were for pets with disabilities.

“It was kind of a lightbulb moment," Campana explains, “where I could apply the skills I learned on the human side of things over to animals."

Soon after, he started Animal OrthoCare, based in Sterling, Virginia, and he's been helping animals with disabilities for the last 13 years.

“We can do this for any type of animal if we think it'll be safe and functional for the animal," Campana says.

Angel Marie, a mini horse, was stepped on by her mother shortly after birth. With Campana's help, she's moving a lot easier these days. Image via Animal OrthoCare/ACC/Ezra Gregg, used with permission.

Some animals have an easier time adapting to their new limb than others do. Take, for example, Felix, a ram in Spain. He almost died after being attacked by dogs but luckily was rescued by El Hogar, an animal sanctuary. Felix was rehabilitated with surgery, daily massages, aquatic therapy, and acupuncture. However, if he was to ever walk again, he needed prosthetics for his front legs.

So, Campana designed a new pair for him.

Felix was on his feet in no time, but that's not the case for every animal.

Humans can be verbally taught how to use their prosthetics and can communicate pain and discomfort in detail. Animals can't — so it sometimes takes animals a longer time to get used to wearing their new devices.

Another challenge is cost. Insurance can help people in need of prosthetics. Pets? Not so much.

Most pet insurance plans won't cover a prosthetic, which makes it difficult. Luckily, animal prosthetics are actually cheaper to make, and Campana has found a way to cut costs by using high performance plastics that can be altered and modified to the animal.

In this way, Campana is helping not only animals, but their families as well.

To make sure that as many animals as possible get the help they need, Campana has also been working with nonprofit organizations and animal sanctuaries, such as the Humane Society.

Plastics Make It Possible, a partner of Animal OrthoCare and provider of the plastics they use, donated $20,000 to the Humane Society of the United States' Animal Rescue Team to help animals in need of prosthetics and orthotics obtain services like Campana's. They also donated raw materials to Campana's cause.

Campana's story shows there are so many ways to give back and help those in need.

When Charles, the chocolate lab, first arrived at Campana's practice, he didn't know what to expect. Little did he know it would foster an inventive and important new direction for his work and his life and would make a real impact for disabled animals (yes — even elephants) around the world.

It just goes to show, with a little creativity, we all can find new ways to make a difference.