Canada is adopting one of Finland's greatest ideas: baby boxes.

The first few months of parenthood can be hard. So Canada’s trying out “baby starter kits.” 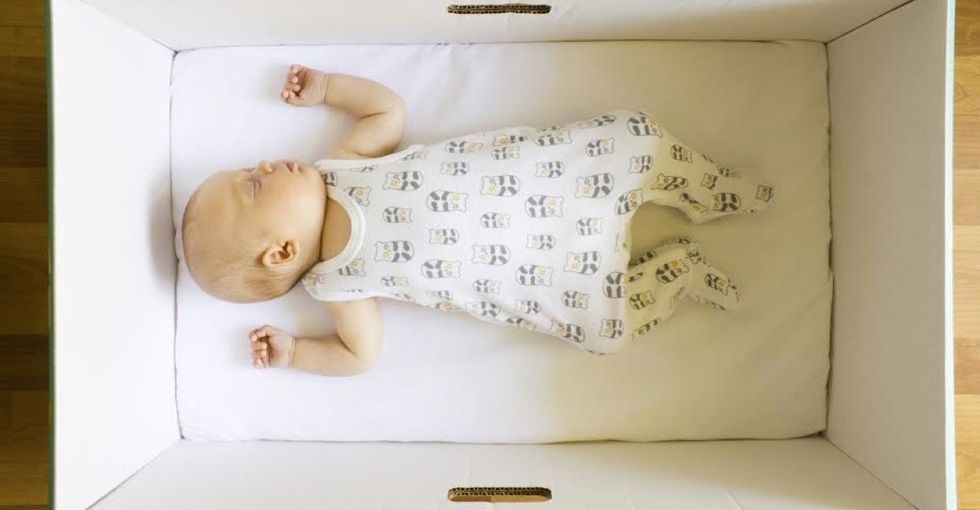 Remember those baby boxes Finland started giving out to parents of newborns for free?

They're boxes with basically everything you need to keep an infant alive, healthy, and happy: clothes, a towel, a quilt, diapers, bibs, a book, a toy. The kit even comes with a mattress, so the box itself can be used as the baby’s first crib.

Looks pretty comfy … do they come in queen size? Image by Milla Kontkanen.

Since its introduction in the late 1930s, the country has seen the infant mortality rate plummet, something experts partly attribute to the box. (National health care and a centralized hospital system played a role, too.) It’s one of those genius but simple ideas that can really improve and even save lives.

Now Canada is picking up on the trend too.

The University of Calgary is launching a study to see if new parents in Alberta could also benefit from these "baby starter kits."

The study is part of the University of Calgary’s Welcome to Parenthood program, which has previously offered parent coaching and parenthood packages, including a guidebook and a dry-erase board for parents to list the help they need.

An example of a baby box. Photo from Welcome to Parenthood.

Here’s how the study works: New moms will pick up the baby boxes from Parent Link Centers a couple months before their due date. While they’re there, they’ll also fill out a questionnaire and get connected with another parent mentor in their community. Researchers will follow up with the new parents after they give birth to see how they’re adjusting to life with a baby.

Karen Benzies, the lead researcher for the study, told the Calgary Herald that they hope the boxes and mentorship will help parents gain their footing during a time of transition. "You’re going to be successful, but every parent needs a little help," she said.

The period shortly after birth can feel lonely for new parents.

New babies require a lot of attention, and it can be overwhelming and isolating to suddenly be responsible for another human life. Particularly for moms struggling with postpartum depression, a support system (like the baby box) could be super valuable during this time.

Canada’s baby box isn’t just going to be a huge help to parents, either.

Researchers think that having better access to parenting resources will help the kids themselves in early childhood, too.

That’s something to cheer about.

Plus, the boxes could be coming to the U.S. soon, too.

They're such a good idea that a U.S.-based baby box mission is headed to Texas in the form of a pilot study, according to WFAA. And even though the U.S. doesn’t offer free baby boxes to most new parents just yet, you can also purchase your very own right here.