Can music help at-risk students succeed? This woman has set out to prove it can. 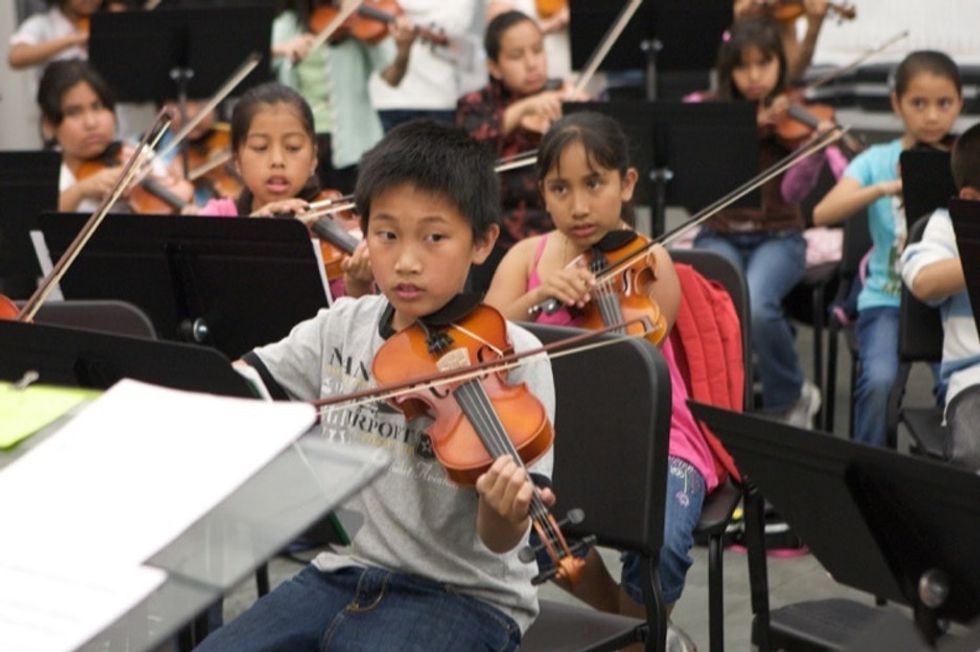 In 1997, Margaret Martin had an experience that would change her life forever.

Her 5-year-old son was playing Brahms on the violin at the Hollywood Farmers Market when a group of teenage boys closed in around them.

Her first instinct was fear.

But she quickly realized the young group just wanted to listen to the beautiful piece by the young violinist, and it warmed her heart.

All images via Harmony Project, used with permission.

This sparked her idea for Harmony Project — a program that promotes positive development for at-risk teens through the practice and performance of music.

No stranger to hardship, Martin is a survivor of domestic violence and sexual assault, and she was homeless for a year. She still managed to put herself through college, studying Social Science. By age 43, she received her master's and doctoral degrees from the UCLA Fielding School of Public Health.

That day at the farmer's market inspired her to help others access the kinds of educational opportunities she found — no matter their background.

“I view it as a human rights issue because I believed every child that shows up at school deserves a chance at their own complete education,” she says.

During her studies, Martin learned that an impoverished environment, i.e., life in a “poor household or violence-fueled neighborhood,” could potentially alter a child’s brain development and prevent them from learning.

Studies have also shown, for example, that for mothers who have not completed their high school education, the reading and math proficiency of their children was deeply impacted.

Martin was confident that music — especially collaborative music — could help these kids boost their academics.

“We call it mentoring through music,” Martin explains.

Through musical education — specifically, teaching kids to play instruments in group settings — Martin's program was founded on the belief that music had the potential to positively benefit a child's academic studies.

A study of Harmony Project kids showed improvement in their brain's ability to distinguish similar-sounding syllables, which is a skill linked to literacy. The benefits reaped from playing and listening to music occur in the same areas of the brain that are traditionally weaker in children from disadvantaged backgrounds.

Therefore, strengthening one area strengthened the others.

In other words, these group music lessons help their brains develop and become more receptive to new knowledge.

By learning the language of music and performing with confidence, the kids involved in Harmony Project can go on to mimic the lessons they learn in music class in their everyday lives, helping them in all their school subjects and improving their grades.

Today, the program is helping over 2,000 students from low-income areas in Los Angeles.

A study of Harmony Project students found that those who were more engaged with the program showed increases in reading scores, while those kids less engaged did not show improvements.

In addition, an overwhelming 93% of Harmony Project seniors have enrolled in college in the past decade.

This is all the data Martin needs to know that her program is making a difference in these kids' lives.

Many of the kids love the program so much they use their weekend time to make a two-hour round-trip commute on Saturdays.

One former Harmony Project student named Paolo Sayo says that he enrolled in the program in sixth grade as an immigrant from the Philippines. Without Harmony, he and his family didn’t have the resources to continue his violin lessons.

Once he enrolled, not only did he get the lessons, he also got better at music practice, and his grades in other subjects went up too.

“Before I joined, I hated the practicing aspect of violin. I just wanted to get it over with,” Sayo says. “After a while, I started appreciating practicing more. Having that discipline transferred to my school work, where I eventually became an honor student.”

Today, he’s studying to be a health care administrator, but his time with the Harmony Project was so beneficial that he has decided, 10 years later, to remain a mentor for current students.

The program has a 2-4-year wait list, so Martin is working hard to help expand the program.

Harmony Project is also winning recognition. In 2009, it took home the Coming Up Taller Award at the White House, the nation’s highest honor for an arts-based youth program, from President Obama.

Martin is hoping to use the accolades to help expand the Harmony Project nationwide. Music education and other arts programs have been claiming to boost overall grades for decades, but there’s nothing like a handshake from the President to prove that it’s striking the right note and people are taking notice.