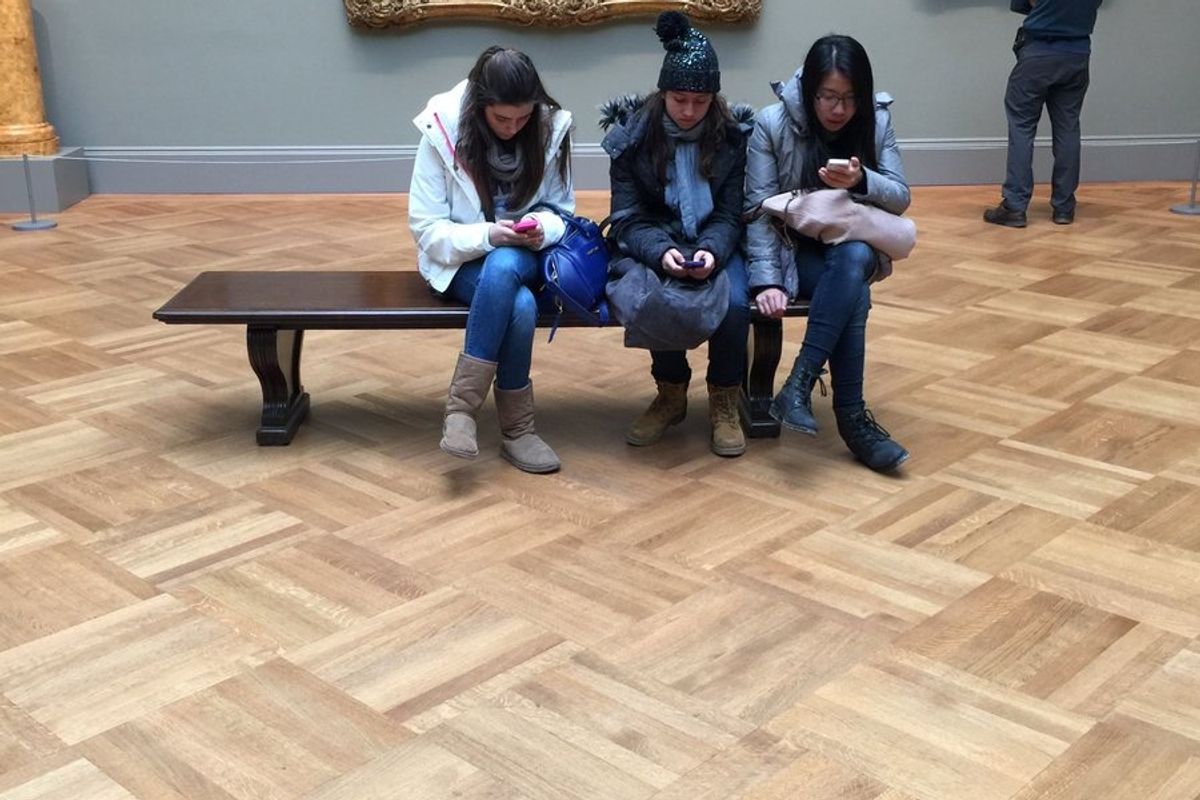 Is technology ruining our view of the world? Are we spending so much time with our faces in our phones that we miss what's going on around us? Are the teens so invested in their Facebooks and Insta-whatsits that they're missing out on arts and culture because they're so invested in their technadoodles? Not necessarily. We actually can't know technology is making someone miss out on an experience if we don't know what that person's experience is.

Bette Midler recently posted a photo of three teens sitting on a bench at New York's Metropolitan Museum of Art. They were all looking at their phones with their backs to the painting "Aegina Visited by Jupiter" by 18-th century artist Jean-Baptiste Greuze.

Twitter's response was simple. Nothing.

RELATED: Two teens got called out for making a TikTok video after a car crash, but they say it helped them 'cope'

Midler was criticized for trying to make a point when there wasn't a point to make. Just because the girls were on their phones didn't mean they weren't appreciating the art. The two aren't mutually exclusive.

The prejudgment of three people without knowing them & the imposing of guilt onto the younger generation for using… https://t.co/HR4SKlEura
— Taylor Corrigan (@Taylor Corrigan)1575822123.0

@BetteMidler Come on. Seriously? This is literally how “OK, Boomer” was born. Those are young ladies actually at a… https://t.co/0ZAreYwskC
— Fred Wellman (@Fred Wellman)1575845666.0

@BetteMidler I'd like to think they are looking at the app on their phones that explains to them the art pieces in the museum 😉
— silvia (@silvia)1575810170.0

More people felt that there was something wrong with taking a photo of teens at an art museum.

@BetteMidler The composition, the perspective. The shadows are too dark, the highlights are too saturated, I would… https://t.co/tbDWjJvSmx
— Jan Wildeboer (@Jan Wildeboer)1575825315.0

RELATED: A plant is learning to take selfies in the name of science

It turns out, the context for the photo exonerates the girls. They're not being vapid. They're actually educating themselves. One college English teacher posted the real story behind the photo.

The analog version would be getting mad because the girls were looking at the plaque next to the painting.

The Met (where this photo was taken) has an app that allows users to do everything from getting information on exhibits to seeing when the museum is closing. The app has been out since 2015.

More and more museums are utilizing technology to enhance visitor experiences. Patrons are able to interact with art in ways they've never been able to before. According to CNBC, technology has helped museum attendance increase.

Technology also allows art to become more accessible to those who have never even been to an art museum. The Met digitized over 380,000 artworks, making them downloadable on any computer. You'd think that the decision would make people skip the museum for the at-home experience, but it actually boosted museum attendance.