As a parent of a kid with autism, this is what I have to lose if Trump becomes president. 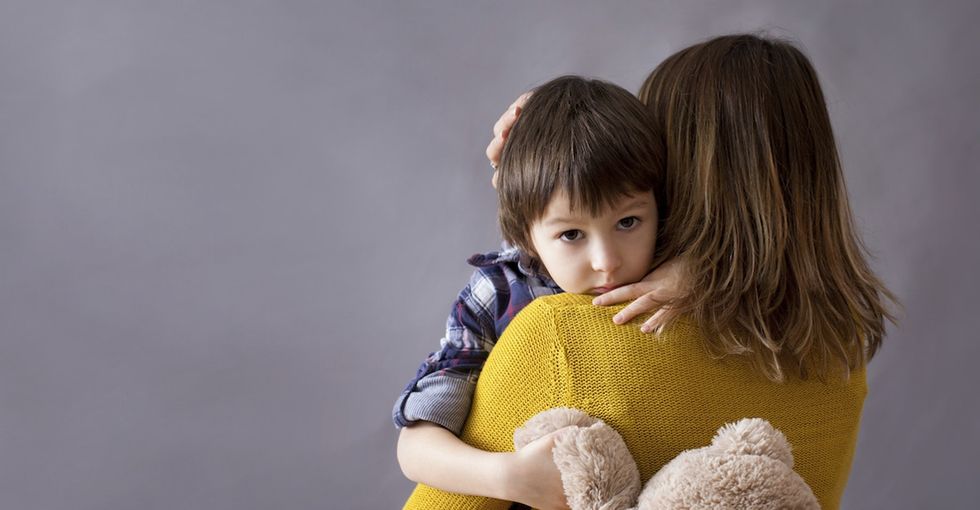 Just a few short years ago, I was sitting in the family room with my husband, entertained by Donald Trump’s aloof presence in the boardroom.

We were laughing over the crazy antics of the contestants on his television show, "The Apprentice."

Now it’s 2016, and Donald Trump is running for president of the United States of America. And I’m not laughing now.

In fact, I’m terrified. I’m terrified that Trump — an ableist, a man who openly and publicly discriminates against people with disabilities (or the perception of disability) — is potentially weeks away from holding the highest office in the land.

He was laughing as he openly mocked Serge Kovaleski. Kovaleski is a New York Times reporter who was born with arthrogryposis, a physical disability which noticeably impairs the joints in his body. "The poor guy, you ought to see this guy," Trump boomed over the adoring faces in the crowd.

Carried by the rising fire in his words, the people in the audience were swept up in the message. They laughed, too.

As a mother of a disabled child, I watched this on television in my living room. And I cried.

I wrung my hands in fear, questioning how this man and his supporters could possibly find any compassion for my son. My son has severe autism, and at almost 13 years old, he can barely speak. He often makes strange sounds and delivers odd jolting gestures at awkward moments. He is smart and sweet, complicated and mysterious.

I watched in paralyzing fear as Trump honed his relationship with radio host Michael Savage.

He has delivered one troubling, disturbing message on Savage’s show after another. Savage, in turn, has made a bid to be Trump’s head of the National Institute of Health. This is a man who, in 2008, claimed that "nearly every child with autism is a brat who hasn’t been told to cut the act out."

I watched in horror as Trump contributed to the dangerous anti-vaccine movement.

He tweets destructive messages that strengthen the already dangerous fear of autism in this country. "Healthy young child goes to doctor, gets pumped with massive shot of many vaccines, doesn’t feel good and changes—AUTISM. Many such cases!" he disjointedly tweeted in 2014.

As a mother of a disabled child, I know Trump in the White House means four years of few real solutions for my son, and that is terrifying.

If Trump wins this election, he will undoubtedly continue to spread misinformation about autism and developmental disabilities. He cares much more about being right than he does about the truth. And so as Trump’s version of how autism is caused permeates society, I fear we will have a nation of under-immunized children.

I lie awake at night in fear, wondering if a Trump administration will again take us back to the days when even talking about my son’s disability felt like a punishable offense.

Those were days when mentioning "autism" as an insurance code was enough to have the doctor’s visit immediately rejected by our insurer.

If Donald Trump becomes president, I believe my family has so much to lose. And I’m scared.

Now, as a family, we have made peace with autism. My son is part of autism, and autism is a part of him. I do not think we would change it — it’s been part of us so long.

But I'm worried because you can tell a lot about a person by how they treat those who need help: the temporarily infirm, the disabled and the elderly, the sick and the poor. Those who have a path harder to walk than most. It’s an idea that goes beyond Republican and Democrat and floats in the soft space of humanity: taking care of those people in our country that cannot, through no fault of their own, care for themselves.

As Trump laughs at disabled reporters, mocks a deaf actress, and questions essential foundations of national health, I worry about the future — my future, my son’s future, your future. Trump's lack of empathy is what truly makes me afraid.

I worry that if Trump is our president, there will be a dangerous shift in tolerance toward children and adults like my son.

If the president of the United States makes fun of disabled persons, who will stop the children on the playground? Will my son be the victim of taunts and harassment from kids or even grown adults who are just modeling the behavior of the most powerful man in the country?

I can’t vote for the school-yard bully. So, world, I have a simple request: Think about your own children. And if you can, think about mine.

Electing Donald Trump will speak dangerous loud volumes — far more than a parent’s words could ever say. That kind of president is not one I want.