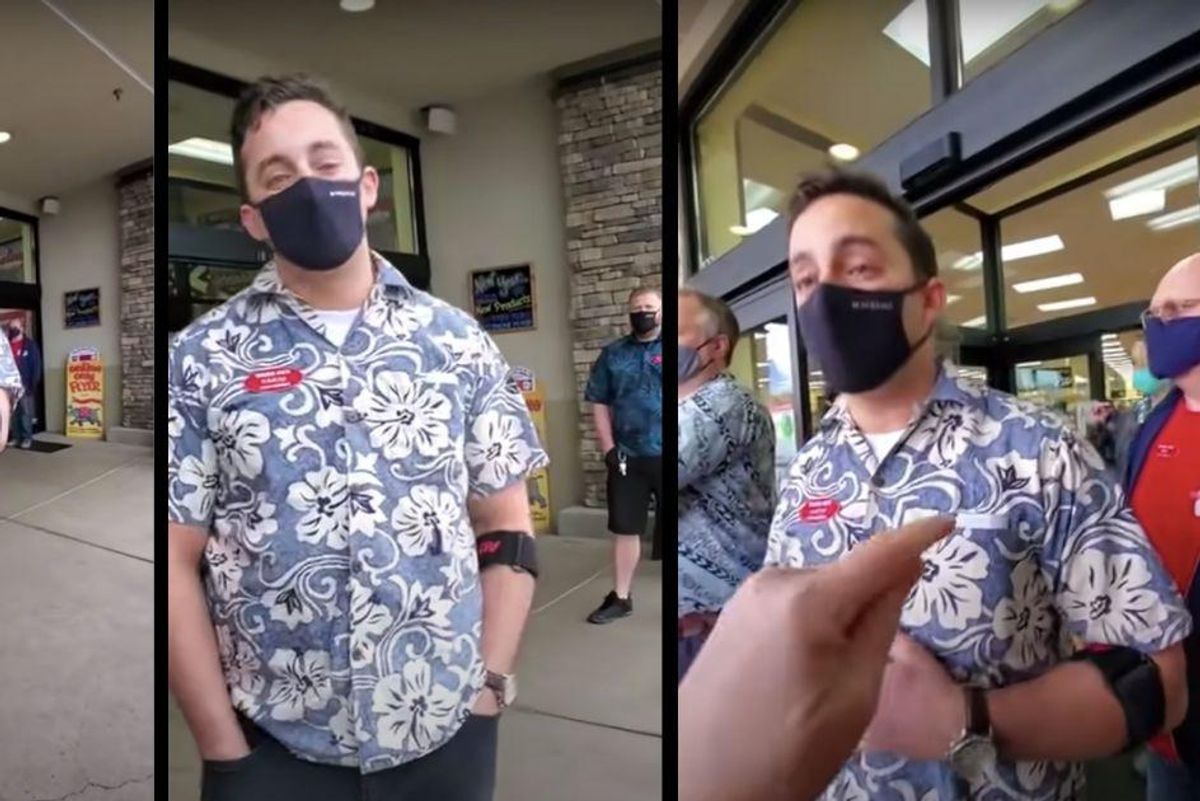 Nearly a year into the deadliest pandemic in a century, the U.S. is still battling not only the virus, but Americans living in denial of reality as well.

Take this video of a group of anti-maskers who stood in front of a Trader Joe's entrance and tried to argue that they had every right to shop there without masks. The woman narrating the video states that they have "a right to commerce" (they don't—there's literally no such right), that Trader Joe's doesn't have the right to require masks (they do—it's their store), that the mandate to wear masks in public places can't be enforced because it's not a real law (it can—), and that they were not there to demonstrate, but just to buy groceries (umm, right).

The manager, to his credit, did what he could to calmly talk with these people while also making it clear that they were not going to enter the store without a mask.

"The point you're trying to make isn't going to be made with us," he said. "It can be made with your government...I am not here to debate policy. I totally respect for you to think anything you want to think...my job, as manager of the store is to enforce the mandate, whether you believe in it or not."

The anti-maskers complained when the manager allowed masked customers to enter the store, asking why they were allowed to shop. The feigned innocence and insincere bafflement is really something. The demonstrators blocked the entrance to the store, preventing other shoppers from entering, then sent some of their group around to the back of the store when they found out that mask-wearing customers were being let in through the back door.

The whole thing is incredibly stupid, but the Trader Joe's employees standing their ground with superhuman patience and diplomacy are incredibly impressive.

(Check out the subtle shade moment at 1:52 when a masked shopper gives a sassy little foot kick as she enters the store.)

The Oregon Health Authority has made it very clear that the state's mask mandate is binding for all. In the Q & A section of its website, the question of whether there are even any health exemptions is addressed:

In addition, Trader Joe's is a private business, which has the right to enact and enforce its own rules for shopping there. We've lived with "No shoes, no shirt, no service" signs for decades without demonstrators claiming that they have every right to shop barefoot. Shopping at a specific grocery store is not a constitutional right. These people aren't just annoying, they're wrong about everything they are saying. They're also putting others at risk by refusing to wear a mask in public.

This isn't hard. The science behind mask mandates has been clear for many months at this point, and further backed up by data from places that tracked the virus before and after mask mandates were implemented. But the key to success is compliance. If people would just wear them because it's the right thing to do to protect everyone and to enable us to live some semblance of normal life without killing millions, that would be great. The irony is that mask mandates only become necessary when people don't do that.

The U.S. is drowning in COVID-19, and these people are flipping over the lifeboats because they're uncomfortable. And the entitlement of believing a business has to serve you when that's what you're doing? Ridiculous. Good for these Trader Joe's employees for not backing down.