An unexpected, outrageous casualty of Trump's travel ban, and 6 ways to fight it. 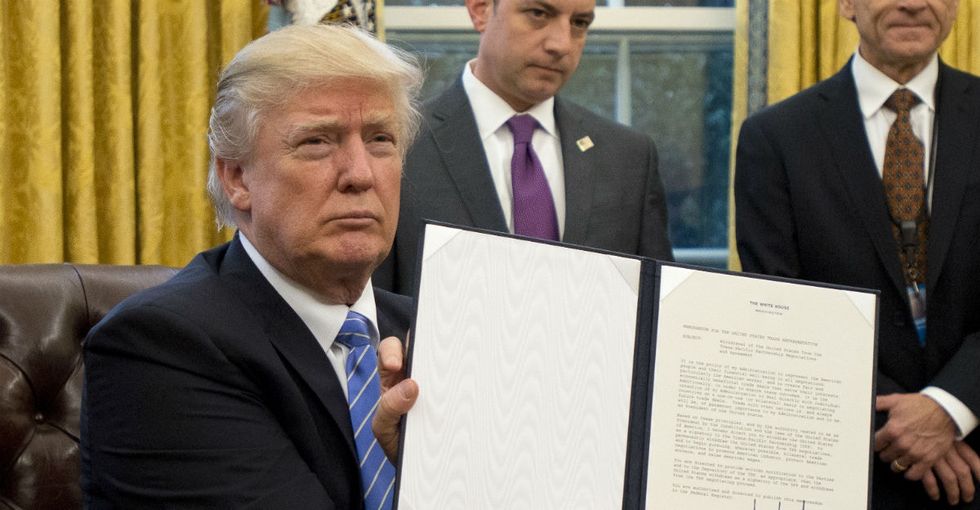 When you're a refugee in a new place, you're facing a lot of unfamiliar things. New foods. New languages. New schools. New neighbors.

That's where organizations like World Relief come in. Among other services, the Baltimore-based nonprofit helps resettle refugees, partnering with local churches across the U.S. to help refugee families feel more at home in their new communities. With President Trump's travel ban targeting Muslims, however, the nonprofit's facing a new, discouraging obstacle.

World Relief announced it's closing five offices across the country — laying off over 140 of its workers in the process — due to President Trump's travel ban barring refugees.

"Our staff at each of these locations have served diligently and sacrificially — some of them for many years — and we are deeply saddened to have to make this difficult decision," World Relief President Scott Arbeiter said in a statement, noting the tragic move will hinder the group's ability "to serve the world's most vulnerable people."

Even in the relatively short amount of time that the travel ban was signed and enforced before courts blocked key provisions, its ramifications are still causing refugees — and the groups aiding them — to suffer. What's more, the travel ban — announced by a president elected largely for his commitment to put American workers first — is now causing job losses: World Relief's woes will result in over 140 employees losing their jobs.

Despite its struggles, however, the nonprofit is devoted to doing whatever it can to make a difference.

“The unfortunate truth is that given the unprecedented nature of the global refugee crisis, there are simply more people than ever that need our support and our compassion," CEO Tim Breene said in a statement.

If the news out of World Relief is frustrating to you, here are six ways you can keep fighting for refugees in the wake of the group's setbacks:

The Senate has been overwhelmed with phone calls from constituents across the country. Sen. Chuck Schumer's office told CNN that roughly 1.5 million calls were pouring into the Senate every day the first week of February, with the vast majority focused on Trump's controversial cabinet picks and executive orders.

John McCain probably won't personally call you back. But you should still call. Photo by Chip Somodevilla/Getty Images.

Outraged callers won't guarantee success all the time (take Education Secretary Betsy DeVos' razor-thin confirmation, for instance). But it works better than most voters realize (case in point: Congress' attempt to gut the Office of Congressional Ethics). Call your senators and members of Congress and tell them you're against Trump's travel ban.

2. Pledge to register as a Muslim if Trump attempts to start a Muslim registry.

Trump has suggested a national Muslim registry would help keep us safer from terrorism, yet again dangerously blurring the lines between religious extremists and the vast majority of Muslims. This sort of fearmongering is used to justify his travel ban. Regardless of your personal faith, you can stand with all Muslims by pledging to register yourself.

3. Support the vital organizations aiding refugees in the U.S. and around the world.

Conflict in Syria has caused a refugee crisis unlike anything we've seen since World War II, with millions of families torn away from their communities and forced to rely on the goodness of others for food, shelter, and protection.

There are many groups of all sizes doing vital work helping refugees this very moment, and they could use our support: Doctors Without Borders, UNICEF, White Helmets, Karam House, Syrian American Medical Society, Islamic Relief USA, UNHCR, Oxfam, Save the Children, and, yes, World Relief.

4. Post the news about World Relief on Facebook along with this video explaining why refugees are not the problem.

Over 700k refugees have resettled in the United States since 9/11. During that time, not a single one has carried out an act of terror. Video by Valerie Bischoff.

Your friends and family should see how anti-refugee rhetoric and policies affect far more people than refugees themselves — like the 140 World Relief employees who lost their jobs due to unfounded fear.

5. Sign a petition against the ban, then spread the word.

A MoveOn.org petition against Trump's travel ban — which states "targeting people based on their religion is wrong and unconstitutional" — has reached nearly 400,000 signatures. Help it reach 1 million.

6. Support the refugees in your own community, who — now more than ever — need to know they're welcome here.

As TED Ideas notes, there are plenty of practical ways you can help folks integrate into your city, especially if you live in a region with a high population of refugees. Start a soccer team — even if you can barely kick a ball — and make sure to include refugee kids. Volunteer to help a refugee student learn English. If you're a business owner, hire them (or if you know a business owner, nudge them in the direction to do so).

1951 Coffee Company in Berkeley, California, hires refugees to help give them a leg-up after resettling in the U.S. Photo by Josh Edelson/AFP/Getty Images.

In the U.S., there have been more than enough terrorist attacks since 9/11 carried out by right-wing extremists — and none from refugees. The vetting process to enter the U.S. as a refugee is long and arduous and certainly not one that leaves us vulnerable to terrorism, experts have argued.