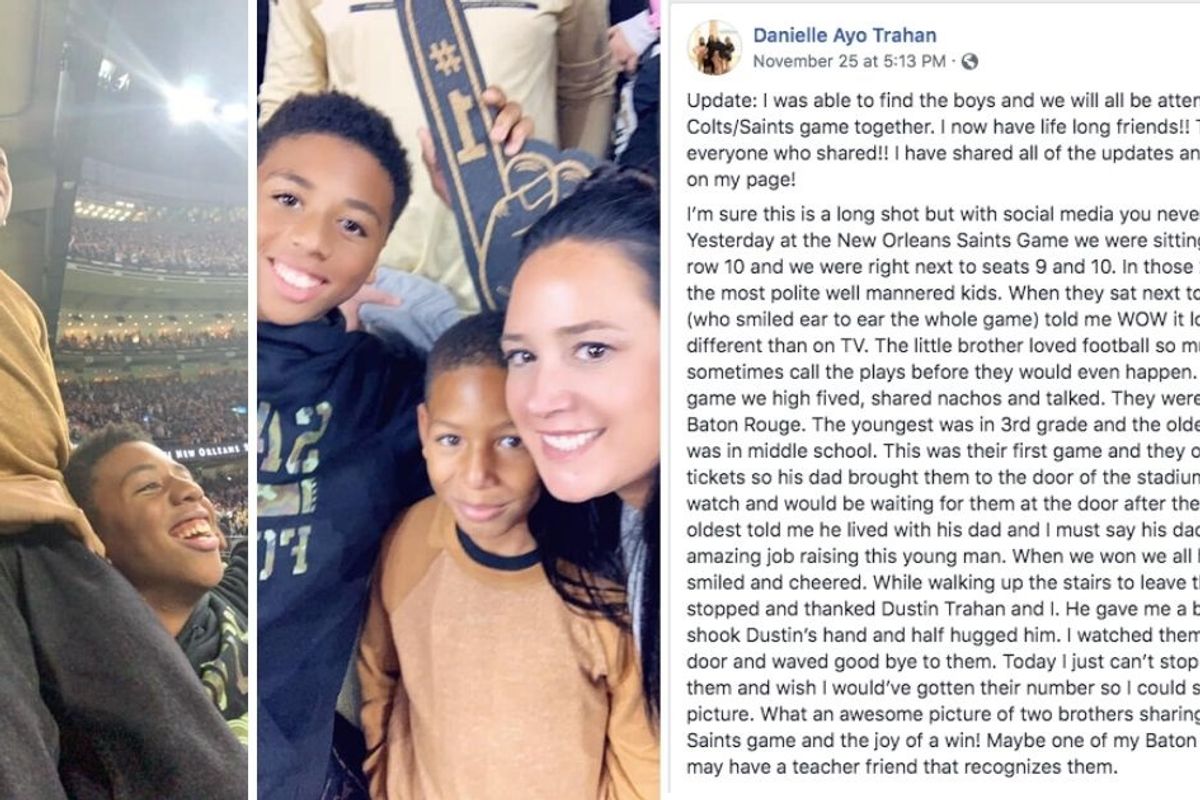 When all we seem to hear is how entitled and disrespectful "kids these days" are, it's lovely to read a story about young people exemplifying good character.

When Danielle Trahan attended last week's New Orleans Saints game against the Carolina Panthers, she and her husband Dustin found themselves sitting by two kids who were attending the game by themselves.

Jairen Fisher, age 8, had been gifted two tickets from his grandmother for his birthday. His father, Jonathan Shaffer, had already been to a Saints game, so he wanted Jairen to be able to go with his older brother, Terrion Shaffer, who is 14. So the two brothers were escorted to the entry gate by Shaffer, then sent to their seats.

RELATED: An NFL linebacker was caught on mic trying to find his mama in the stands. Awwww

"When I sent them in and decided to send them by themselves I was worried a little bit," the boys' father told Fox 8 News. "But I wasn't worried a lot because I know my kids. They can handle themselves, and I know they're respectable."

Indeed, they were exceptionally respectable. In a Facebook post, Trahan, a special ed paraeducator and mother of four, described how impressed she was by the boys and how well-mannered they were. She'd taken a photo of Terrion lifting Jairen onto his shoulders when the Saints scored the winning field goal, and shared the photo as well, hoping that someone would be able to track down the boys' family so they could have it.

"In those 2 seat I met the most polite well mannered kids. When they sat next to me the oldest (who smiled ear to ear the whole game) told me WOW it looks so much different than on TV. The little brother loved football so much he would sometimes call the plays before they would even happen. The whole game we high fived, shared nachos and talked. They were brothers from Baton Rouge. The youngest was in 3rd grade and the oldest told me he was in middle school. This was their first game and they only had 2 tickets so his dad brought them to the door of the stadium so they could watch and would be waiting for them at the door after the game. The oldest told me he lived with his dad and I must say his dad is doing an amazing job raising this young man. When we won we all hugged and smiled and cheered. While walking up the stairs to leave the oldest stopped and thanked Dustin Trahan and I. He gave me a big hug and shook Dustin's hand and half hugged him. I watched them walk to their door and waved good bye to them. Today I just can't stop thinking about them and wish I would've gotten their number so I could send them this picture. What an awesome picture of two brothers sharing their first Saints game and the joy of a win! Maybe one of my Baton Rouge friend's may have a teacher friend that recognizes them."

"I kept looking at that picture and I thought to myself if that was my first game or my kids first game, I would love to have that picture of them," Trahan told Fox 8 News.

Sure enough, the post started making the internet rounds and the boys were identified. And that's when the story truly went viral. News stations picked it up, and Trahan started receiving messages and friend requests left and right.

"Never underestimate the power of just being nice," Trahan wrote in a follow-up post after meeting again with the boys. That simple statement really sums up why their shared experience at the game resonated with so many. It's not that there was any great act of altruism or heroic deed—it was two nice kids meeting two nice adults, sharing a fun time together, and reconnecting via the internet so that the boys' family could get a memorable photo. Such a simple, sweet, universally lovely story feels all too rare in today's social and political climate.

RELATED: The Seattle Seahawks' newest linebacker is changing what professional football looks like.

And it's not over yet. The Trahans will get to attend another Saints game with the boys and their dad, thanks to a law firm who gifted them tickets to the Saints vs Colts game being played Monday night.

Thank you for sharing, Trahans. When madness abounds, these kinds of uplifting human stories remind us that basic goodness and kindness win the day, every time.