An Arab Spring cartoonist's next project? Cartoons about the West and how the Middle East sees it.

The Arab Spring may be over, but this cartoonist's work is not. 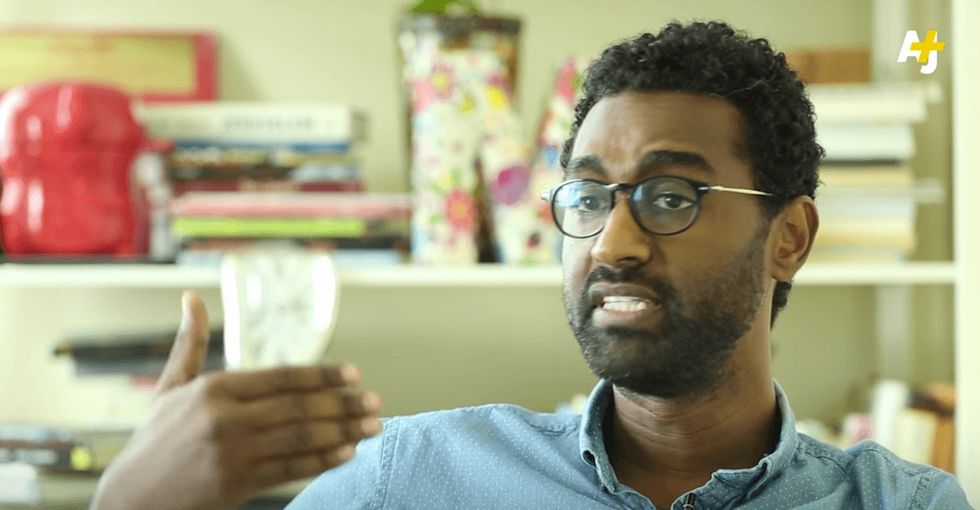 Khalid Albaih is a political cartoonist whose art and drawings made widespread appearances at Arab Spring uprisings, printed on banners and graffitied on walls.

At one point, Khalid's drawings landed him in jail in Egypt, where he was interrogated for hours. Fortunately, he got out.

Now Khalid is shifting to a different focus on his cartoons: The relationship between the West and Middle East.

This focus was spurred in part by the Islamophobic backlash after the Charlie Hebdo shootings.

In Jan. 2015, he said in an interview with the Huffington Post that while he did not support the violence against the Charlie Hebdo cartoonists, the dialogue around the events was missing nuance:

"Let's not make cartoons just for the sake that this is our freedom of speech and do what we can do and insult a whole nation. This is not the right way to do it. We as cartoonists need to find middle ground. At the end, everybody can relate to cartoons. Everybody can understand them. We don't want lazy cartoons. We don't want, 'Oh, you want to draw a Muslim? Draw a guy with a beard who's angry. You want to draw a Muslim women with a hijab. And that's it.' No. We want smart cartoons."
— Khalid Albaih

And when it comes to talking about the West, Khalid is all about smart cartoons. Here is what we might expect:

To tap into this theme, Khalid will have an exhibit titled "It's Not Funny" at the Arab American National Museum in Dearborn, Michigan — just a few miles west of Detroit.

"For me, this is an opportunity to reach out to the other side because we see what the West thinks of us but they don't see what we think of them," Khalid Albaih said in an interview with AJ+.

If you're in Michigan or stopping by anytime soon, make sure to check out Khalid's exhibit.

Want to see what else Khalid said to AJ+ about freedom, cartoons, and politics? The clip is below.