After a story about a boy bringing lunch for his classmate went viral, Reddit responded. 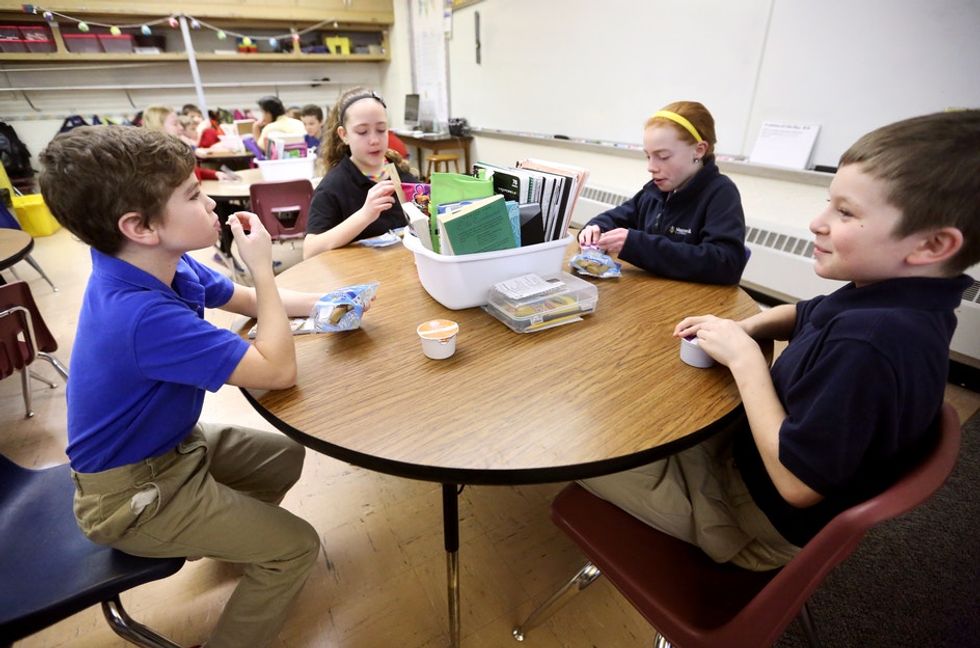 Josette Duran didn't expect her story of kindness, compassion, and sandwiches to go viral, but it's not hard to see why it did.

In early September, Duran's son Dylan asked her if she would start packing him two lunches to take to school. Worried she wasn't feeding him enough, Dylan quickly laid those concerns to rest.

"Mom it's for this boy," Josette wrote on her Facebook page, recalling her conversation with her son. "He only eats a fruit cup for lunch can you make him lunch too? I don't think he has lunch money."

Josette told ABC News that she sent Dylan to school with extra sandwiches, yogurt, and chips for two months. When the boy's mother found out, she asked the school to call Josette so she could thank her in person and offer to reimburse her — but Josette said she declined.

"This hits home to me because a few years ago, me and my son were homeless," Josette said. "I was living in my car, I was washing him in bathrooms, and we didn’t have food."

The story was posted to Reddit, where it received hundreds of comments. One user recalled how their parents helped feed their friends when they were in grade school.

Photo by U.S. Department of Agriculture/Flickr.

"My mom gave me $3 for lunch every day, which was $3 more than my best friend's mom gave him. That was enough to buy a Pizza Hut personal pizza, so we shared one of those every single day at lunch. I never thought about it much back then — I shared with him like I shared with my brothers, it was a given — but when we were in our 40s he told me how much it meant to him that I shared my lunch with him every day. He told me that he loved my mom and dad because they took care of him too. That meant the world to me."

Another jumped in to say "thank you" to the classmates who fed him.

"Coming from a guy that has a best friend that did this for me. Thank you. He saw it as nothing as well, I can never repay him for how much it meant to me. Even when my mother kicked me out at 16, I lived in his backyard in a tent and every time his father would leave, I would come in to eat, shower etc. He's still my best friend 28 years later and one of the only dudes I truly love to death."

One wondered why there isn't a better system in place to provide food for children whose parents are struggling.

"My mom paid for my best friends lunch for 3 years in middle school because her parents believed that she didn't get hungry at school (read: they didn't give a shit about her). It's so sad to me that so many children don't get lunches at school. There really needs to be a system that will give a hungry child food no matter what. The kids can't help it if their parents don't feed them/make sure they get a lunch."

In response, a redditor recalled the shame that led them to lean on their friends for help.

"I knew we didn't have money so I never told my mom when I ran out of lunch money. One time I racked up a negative bill so bad they were going to not let me eat school lunch and they finally called my mom. When she came to pick me up she was crying at my school because she couldn't afford to pay it (she was working full time and didn't qualify for free lunch). My friends mom saw and paid it off plus added a chunk of money to it. I wasn't old enough to really appreciate the gesture, so I never said thanks. Will you tell your mom I said thanks, she didn't help me specifically but she helped somebody in the same situation so it might as well have been me."

One had a story about settling lunch debts for kids who owed the school:

"My son's school would literally give the students two packages of crackers (not cheese or peanut butter crackers, just regular crackers) and a carton of milk. Fortunately, my son never had to worry about that, but when I found out about it I started going into the school every month and paying up all the late accounts. It wasn't a major amount (the most I ever paid was around $23), but I couldn't bare the thought of one of these elementary kids eating that for lunch.
It really pissed me off that in the US we still have kids that are treated like that."

Which inspired another user to take action:

"I had a single mom, so we were poor when we were growing up. So poor that I actually feel guilty (I don't quite know how to describe the feeling but guilty is pretty close) that I'm married and that my child can grow up in a financially stable home.
I didn't know you could settle other children's lunch debts, and this is something that I want to do when it's time for my child to go to school. I'm glad I found out about this, thank you."

According to USDA, food insecurity affected at least 7 million American children in 2015.

Like the Reddit users who saw themselves in Josette and Dylan's story, these children lack access to affordable, nutritious food, they skip a meal every now and again to save money for other essentials, and others live in deep poverty.

Like the Durans' Albuquerque school, many lunchrooms allow students to take a meal and pay later, but those who do accrue debt with the cafeteria frequently face stigma from peers and teachers. Some report feeling singled out when cafeteria workers remind them to pay. Others recall embarrassing lectures from school officials, and still others report having their lunches thrown away in front of them.

Some cities are trying to take the burden away from parents by stepping up to fill the holes in the USDA's National School Lunch Program, the main federal program that subsidizes meals for schoolchildren.

Meanwhile, some in Congress are trying to make it harder for schools to serve students across the board.

In 2010, Congress — with wide bipartisan support — passed a bill establishing a "community eligibility" standard for school districts wishing to serve breakfast and lunch to their students at no cost. Under the provision, students would no longer have to apply for free meals individually by household. Instead, meals would be subsidized for the entire student body based on the district's level of need — determined by its percentage of at-risk students.

A bill introduced in April by Rep. Todd Rokita of Indiana seeks to limit the program and make fewer schools eligible — by raising the threshold of needy students required for schools to qualify from 40% to 60%.

There are a lot of hungry kids in America, and — unfortunately — a limited number of parents like Josette Duran.

Individual efforts to pay it forward are heartwarming. They're inspiring. And they only go so far. Feeding all of America's kids means supporting policies that expand benefits for children like that boy in Albuquerque — and the politicians who expand those benefits.

Ensuring one child doesn't go hungry might take a concerned friend, a nosy neighbor, or a vigilant school.

Ensuring no child goes hungry? That takes all of us.