Adults get active shooter lessons from a surprising, but unfortunately well-qualified teacher. 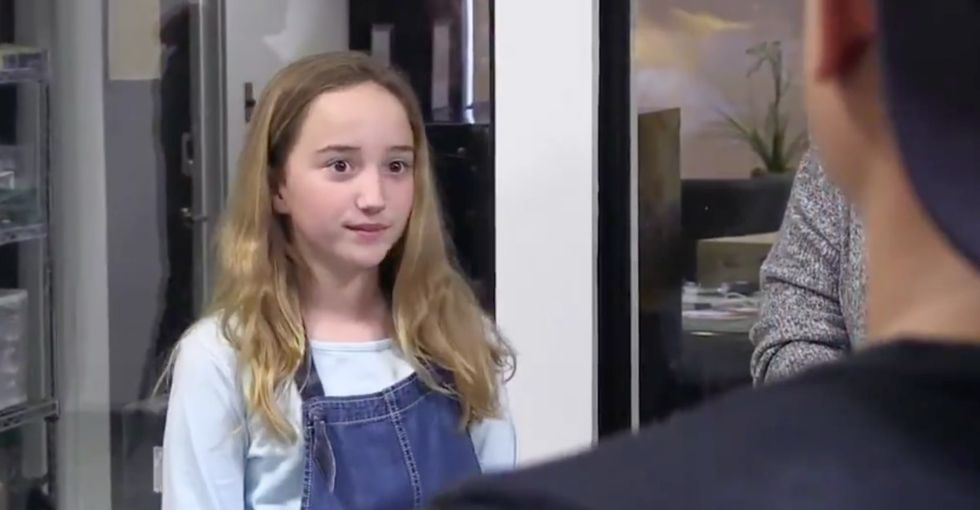 “If there was an active shooter, you’d all be dead,” Kayleigh, an elementary school-aged girl introduced as an “expert” bluntly tells a group of adult workers assembled in their office mail room for a team building event.

“When you talk out loud, the shooter can tell where you are and where you’re hiding,” she continues. “Sometimes we play the game ‘who can stay quietest the longest’ so we all remember.”

The adults look uncomfortable and about as shocked and disturbed as can be expected that an innocent-looking child is instructing them on how to try and protect themselves by pushing tables and chairs against doors, placing paper over windows, and crouching on toilet seats in the bathroom. Then we see what was likely flashing in their minds as Kayleigh spoke — young children carrying out these actions in a classroom.

“And you can’t cry,” she adds. “It gives away your position and your hiding spot.”

The PSA concludes with an eerie song that Kayleigh explains was taught to her by her teacher to makes sure she and her peers wouldn’t forget what to do if there was an active shooter in their school.

“Lockdown lockdown let’s all hide. Lock the doors and stay inside. Crouch on down. Don’t make a sound. And don’t cry or you’ll be found,” she sings.

While this video may seem a little dramatic, it’s not. According to March For Our Lives, which advocates for gun control, 95% of public school children in the United States practice lockdown drills like Kayleigh describes in the video.

Gun control is not a new public policy issue, but it’s been gaining momentum lately because of the number of recent mass shootings. Unsurprisingly, it’s become a hot topic among candidates for the 2020 presidential election.

Last week President Trump addressed the allegedly flailing NRA and also "unsigned" the United States from a United Nations arms treaty which helped keep firearms out of the hands of human rights abusers.

On the other end of the spectrum, Democrat presidential candidates California Sen. Kamala Harris and New Jersey Sen. Cory Booker have made gun reform a significant part of their political agendas.

"I am tired of seeing street-level shrines to children who have been murdered — candles and teddy bears," Booker recently declared, calling gun control a public health issue. "I'm tired of going to funeral after funeral when the most perverse, unnatural things happen where parents bury children."

Obviously March for Our Lives stands with the latter candidates. Their PSA urges viewers to sign a gun reform petition advocating for laws that will prevent guns from falling into dangerous hands.

“Let the Senate know you want S. 42, the Background Check Expansion Act, passed so we can close gun sale loopholes and ditch mass shooting class,” they wrote on their website. “The fight for universal background checks is the most important fight for gun violence prevention yet, and 97% of Americans support it.”

No matter how you feel about the second amendment, can’t we all agree that thorough background checks are absolutely necessary, and that getting access to a potentially deadly weapon should be considered a privilege and not a right?

While not every one of these tragedies — Sandy Hook, Columbine, Parkland, the California synagogue, just to name a handful. — could have been prevented with tighter gun control laws, it’s very possible that many would have been. Just think about how many lives could have been saved if just one of the shooters behind these massacres hadn’t been able to get a gun.

To let the Senate know you want S. 42, the Background Check Expansion Act, passed, sign the petition by clicking here.