A viral video about refugees from 2 years ago now has a sequel, and it's gut-wrenching. 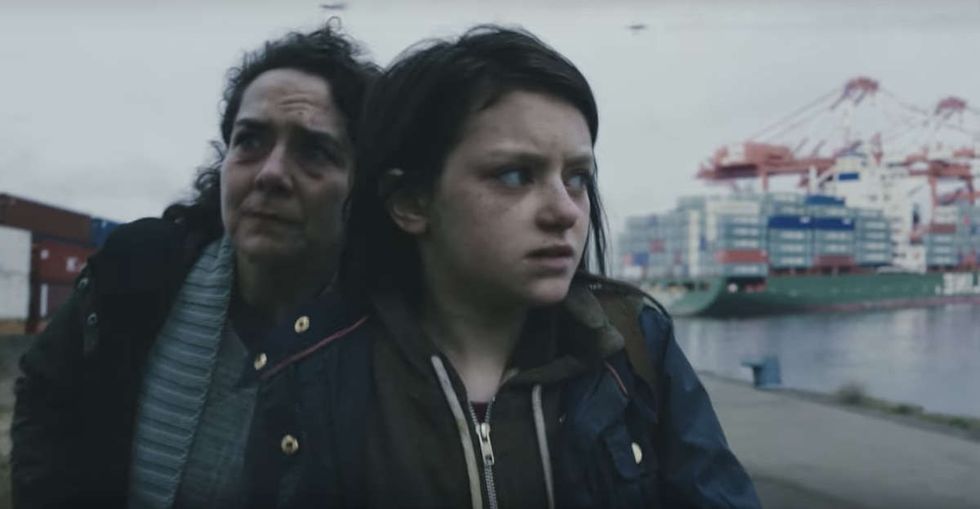 In 2014, international relief organization Save the Children released video about the struggles of child refugees that caught the world's attention — by employing an ingenious twist.

The 90-second film transplants the Syrian Civil War to the U.K., and the "child refugee" it follows is a young, middle-class British girl.

In less than two minutes, we watch the girl — whose name we never learn — go from living a comfortable, familiar life to having that life brutally upended, her home abandoned, and her family split up by an (imaginary) war.

As we leave her, celebrating her birthday in a medical tent, we're left wondering what will happen to her.

Last week, Save the Children released a follow-up short film that answers that question — and it's predictably gut-wrenching.

In the two years since we last checked in with the girl, she's been forced to flee her country in a raft:

GIFs via Save the Children/YouTube.

Gif by Save the Children/YouTube.

And, ultimately, left completely alone with only an anonymous aid worker to care for her.

Since 2011, nearly 5 million people have fled Syria. 2 million of them are children.

These children are often forced to travel without their families, leaving them unprotected and at risk for exploitation.

In May, CBS News reported that dozens of Syrian child refugees in Turkey are being forced to labor long hours in textile factories.

Why is it so hard to get people to care about the refugee crisis?

Recent studies suggest that humans frequently struggle with inter-group empathy — feeling genuine concern for those we perceive not to be like us.

A Syrian refugee child waits to cross the border into Jordan. Photo by Khalil Mazraawi/Getty Images.

The rash of closed borders and dismissals across Europe and in the U.S. would seem to indicate that there are indeed many in those places who consider Syrians "not us."

With this new video, Save the Children appears to be betting that it's easier to get an audience to empathize with the plight of a (fictional) European girl in danger and to draw the connection to the (non-fictional) refugee crisis from there.

The organization may very well be right (witness the difference in coverage between March's bombings in Belgium and May's deadly terrorist attack in Baghdad).

Most refugees speak a different language than most Europeans and Americans do. Many observe a different religion.

That an organization like Save the Children would need to portray their struggles via a child who looks similar with experiences that are recognizable to the average Westerner in order to jolt folks into action is heartbreaking in its own right.

But you know what?

We’re already too far into this crisis to worry about how we get people to care.

What matters is that people do.

And that we do something to help those in need.

You can read more about Save the Children's efforts to address the Syrian refugee crisis here.