A photographer asked these kids what they hoped to become. Here's what happened. 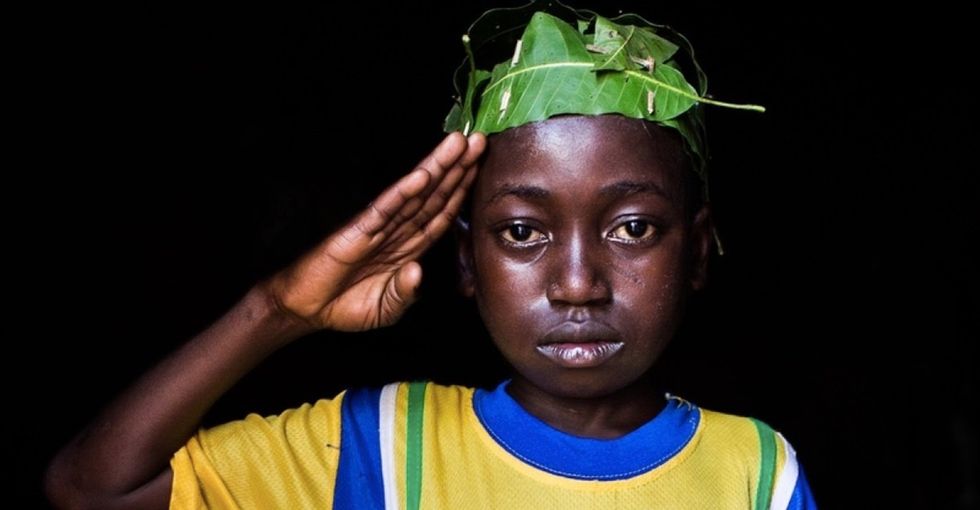 This is Kadijatu Mamane Zeinan and she wants to be a teacher.

She may seem familiar, like your child, little sister, or even like you when you were younger. Her eyes sparkle with a carefree joy and wonder most of us tend to lose as we grow old.

But Kadijatu has it in spades. Happy and full of life.

All photos by Vincent Tremeau, used with permission.

Her sweet spirit is especially impressive considering Kadijatu is growing up in country prone to crisis.

She's living in Niger, a west African country plagued by external threats. Attacks from terrorist group Boko Haram have killed thousands and driven families from their homes. And new threats from Libya make it tough to secure her country, which is about twice the size of Texas.

But despite the uncertainty, Kadijatu remains optimistic about her future.

"I want to be a teacher like my father," she said.

Photographer Vincent Tremeau captured Kadijatu, and dozens of other children living in western and central Africa for his latest project, "One day, I will."

The series features portraits and stories of the children dressed up as the people they want to become.

Like Salifa Adamou, who wants to protect forests in Niger.

Tremeau, a former aid worker turned photographer, began the project while completing an assignment on the humanitarian crisis in the Central African Republic (CAR). He decided to get to know the children at the refugee camp and came up with the idea for portraits.

"It is a game to come dressed up as what you want to become," he told Upworthy. "So it is always a fun activity to do, especially for the kids..."

Now in between assignments, Tremeau travels to schools throughout the region and chats with the teachers about participating in the project. In the small villages he travels to, many of the kids don't have access to cell phones or computers, so many are excited to be photographed.

The kids at this school were so excited to dress up and share their big dreams with Tremeau.

The career goals and kid-made costumes are as creative and inspiring as the kids themselves.

This young lady in Niger wants to be a journalist.

Georgine, 13, from the Democratic Republic of Congo (DRC) wants to be on the radio.

And then there are electricians, like this little guy in the CAR.

Sakima, 10, from Niger hopes to be an educator.

And check out this fabulous future pilot from the CAR.

Healthcare professions are popular too. Like this future nurse in the CAR.

And Sekou, an aspiring doctor from Mali.

Some of the kids hope to work with their hands, like Rajikou Ibrahima of Niger who wants to be a mechanic.

Or Issouf Konaté of the Fakola Village in Mali who wants to become a chicken farmer.

And get your first look at David Kamaté , age 9, who is just a few decades away from becoming the president of Mali.

But even after photographing dozens of children, some of their responses still catch Tremeau off guard.

"I think about this young girl who said she wanted to be a basket makers, so she can sell baskets and take care of her future children if she has to get married with a drunkard or a irresponsible husband," he told Upworthy.

"When you are still a kid, it is surprising to have such a maturity. But unfortunately this is the reality she lives in too, and she already knew she had to take care of herself, even at this young age," he said.

And for every aspiring teacher, nurse, or president, there are soldiers and diamond collectors.

Their countries are plagued by war and conflict, and many of the young boys in the Democratic Republic of the Congo and the Central African Republic hope to become soldiers, not to pillage and destroy, but in the hopes of protecting their families.

12-year-old Patrick of DRC is one of them.

Children also look forward to working in the diamond industry, which employs many people in western and central Africa, but is incredibly dangerous and unforgiving.

Many use makeshift boats to find diamonds in the riverbeds.

This young girl in the CAR even made a paper boat as part of her costume.

But with education and opportunity, these creative, talented kids can turn their dreams and ambitions into reality.

Ibrahim, a young boy in the CAR who wants to be a soldier.

"It is something I deeply believe in," said Tremau, whose parents were both teachers. "Education should be at the center of every priority, even in time of turmoil, so it can change mentalities, and hopefully bring a better future for the next generation."

For years, many children in the region didn't have access to primary education. In the Democratic Republic of Congo alone, millions of children remain out of school, as the region struggles to come back after war and continued violence.

But things are turning around. Just ask Francoise, a teenage girl with an infant son, who's determined to become a nurse through hard work in school. She shared her story of resilience with Tremeau.

“My name is Francoise, I am 15 years old, I have a child named Chance. He is 1 year and 4 months old. As soon as I wake up in the morning, I wash my baby’s clothes before I go to school. While I am away, my grand-mother looks after him. When I go to school, I am not ashamed of anything. But others cannot understand why I am a student while I already have a child.I tell them that if I study, it is exactly because I want to help my child. Even though others make fun of me, I let them talk and go to school anyway."

Tremeau is continuing his project in other African nations and hopes to expand the series to other continents as well.

"I would be curious to do it in developed countries like in Europe, the U.S. or in Canada and see what comes out of it. We will see if I have the opportunity to," he told Upworthy.

Tremeau is also sharing a picture from his series every day on his Instagram page, where you can find even more pictures and personal stories. And he hopes to put the photographs on exhibit sometime in the next year.

Driver Hassan poses dressed up as a driver, in Carnot, Central African Republic. "I want to go to school so I can learn traffic regulations so I can be a good driver". Photo by @vtremeau Carnot is an isolated city, in Western CAR. Most of the car you can see belongs either to humanitarian organizations or the UN soldiers. It can take days to reach the capital Bangui by road. In 2014, there wasn’t any gas stations in the country anymore, except in the capital. Play the game! Join us on @1day1will and use #1day1will to participate in this project and show that #youngmindsmatter #Africa #CARCrisis #CentralAfricanRepublic #everydayafrica #photojournalism #documentaryphotography #portrait #dressupasthefuture #driver
A photo posted by One Day I Will (@1day1will) on Mar 9, 2016 at 3:55pm PST

They're on the path to amazing things. And thanks to photographer Vincent Tremeau, we can see and share their stories and work together to encourage their education and push for greater opportunities.

A woman wrongly accused a man of stealing her friend's car. He handled it with grace.

Woman screams at a TikTokker she accused of stealing a car.

Guilherme Peruca turned on his camera's phone and started recording after an elderly woman began screaming at him through his passenger side window in a Lowe's parking lot. The woman was accusing him of stealing her friend's car, but she was mistaken.

"I need help!" the woman yells outside of his passenger side window. "Someone's trying to steal my best friend's car."

When Peruca told the woman the car was his she yelled back, "Get outta here" as she tried to pry open the door.

"He's stealing this car, it's not his!" the woman continued. "I don't care what he says!"

Eventually, a Lowe's employee intervened to sort out the situation. Peruca showed her his driver's license and car registration to prove the vehicle was his and then the employee calmly guided the woman away.

Peruca didn't need to show her his paperwork but he did so anyway just to deescalate the situation.

From Your Site Articles
Related Articles Around the Web
pets
Get stories worth sharing delivered to your inbox
By signing up you agree to Upworthy's privacy policy.
Trending Stories
psychology
Education & Information