A mom told women they shouldn't wear leggings for her sons' sake and instead got a lesson on not policing women's bodies. 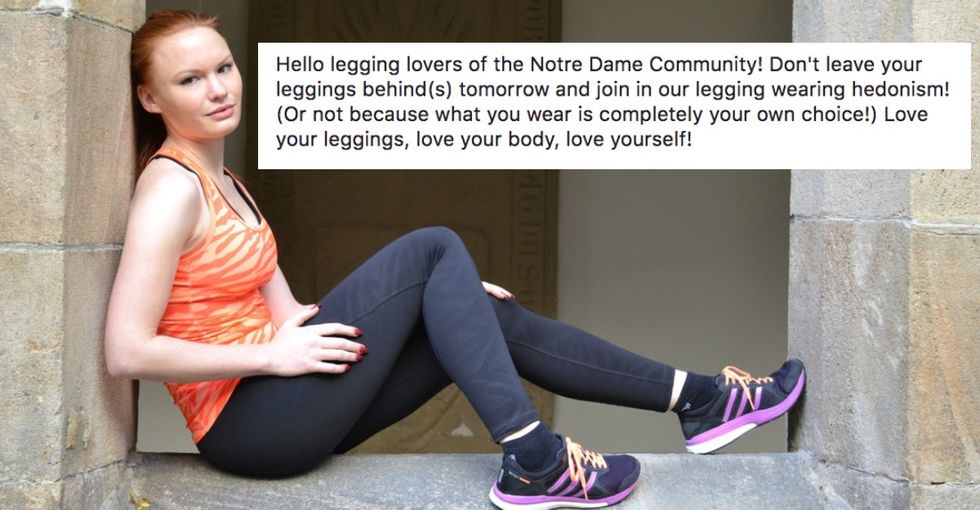 Policing women's bodies — and by consequence their clothes — is nothing new to women across the globe. But this mother's "legging problem" is particularly ridiculous.

What someone wears, regardless of gender, is a personal choice. Sadly, many folks like Maryann White, mother of four sons, think women's attire — particularly women's leggings are a threat to men.

While sitting in mass at the University of Notre Dame, White was aghast by the spandex attire the young women in front of her were sporting.

So, late last week, White penned a 'letter to the editor' that described leggings as an “unforgiving garment" and a problem only girls could solve.

“I've thought about writing this letter for a long time. I waited, hoping that fashions would change and such a letter would be unnecessary — but that doesn't seem to be happening. I'm not trying to insult anyone or infringe upon anyone's rights," the mom wrote.

From there, she tells a story of her horrific first encounters with leggings and the obstacles they provide to her ability to teach her son that women are worth respecting, as opposed to sex objects and “babes."

“I was ashamed for the young women at Mass. I thought of all the other men around and behind us who couldn't help but see their behinds. She ended on this plea: "Think of the mothers of sons the next time you go shopping and consider choosing jeans instead."

In a delightfully opposing response, the women of Notre Dame University decided to create a "Love Your Leggings Day" because "what you wear is completely your own choice!"

The hashtag #leggingsdayND was created in tandem to remind women that they have body agency and men have the self-control to understand that freedom and not act on attraction. The resulting photos and messages have been nothing short of AWESOME.

I'm sorry if my leggings are making men ogle me. Maybe they should have some restraint and the brainpower to realiz… https://t.co/v8VBbwgasH
— Megan Wrappe (@Megan Wrappe) 1553782969

Some students have used this hashtag as an opportunity to upload pictures of themselves in leggings – including in some humorous positions, like Annie-Marie.

“A Catholic mom published an opinion in ND's newspaper that leggings LeadMen Into Sin so we're protesting our right to not be responsible for men and to not be constantly policed by morals or femininity #LeggingsDayND",tweeted @anniejarr.

And it got cheekier (pun intended) from there.

The movement has since spread outside of Notre Dame to the point where other moms are addressing the importance of raising sons who aren't just bodies of insatiable lust, like Becky Stewart.

“Mom of two men here - I'm quite sure that mine do not equate female bodies(naked or clothed) with instant boner. @NotreDame#leggingsdayND

If you raise boys that can only treat women as people when they are dressed a certain way, something has gone terri… https://t.co/9JJbRUBdAu
— Meghan W Wallace (@Meghan W Wallace) 1553751641

And those involved didn't just challenge sexist views about women's attire. They even took the time to highlight the fact that women of color are likely to experience increased levels of scrutiny.

Women of color face high levels of harassment and there have been several instances of the last few years – like Serena Williams being criticized for wearing a catsuit during a French Open despite health benefits.

Finally, Dani Green, a PhD Candidate in English at Notre Dame has an excellent thread that discusses why this movement is so much bigger than women's freedom to wear leggings.

There have always been plenty of other folks out there who believe women should ditch leggings and take on the emotional weight of being responsible for men's choices like White. And there will likely be many more. But to them we simple say, "Leg it go!"

This article originally appeared on March 28, 2019.