A man made a tear-jerking video about all the unopened voicemails from his mom. 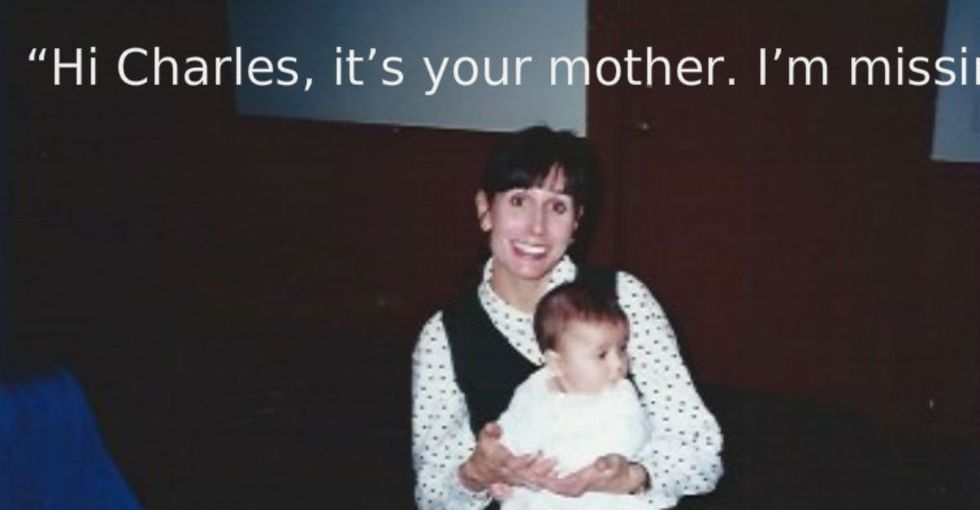 Then one day, his mom called and mentioned her frustrations in transferring the old family footage to a hard drive.

Charles, in one of his family's home videos. GIF via "My Baby You'll Be."

About 20 hours of family memories — the day Charles learned how to "pump kick" on the swings, an adorable rendition of "Twinkle, Twinkle, Little Star," and so many others — had been packed away without his knowing.

Charles, now a Brooklyn-based filmmaker, was anxious to see the footage. So he offered to do the digital transferring himself.

"I watched every clip, end to end," he said. "I cried, I laughed, and then I wondered, what happened? Why aren't we as connected as we used to be?"

Charles, in one of his family's home videos. GIF via "My Baby You'll Be."

Looking for answers, Charles turned to another unlikely source: his phone.

More specifically, to the 38 unopened voicemails that were hiding there.

Charles wanted to use them as a means to try to understand how and why his family ties had changed over time. Because, although there hadn't been any sort of falling out and he loved his family very much, he still felt a certain disconnect.

Many of the voicemails he unearthed were from his mom, Dawn Evans.

As Charles learned, most of the time she was just checking in on simple, day-to-day stuff, like her attempt to buy him the perfect shirt.

“Hi, Charles. It’s Mom. I want you to know I tried to buy you a shirt today, and I spent probably a good 40 minutes ... The thing is, I find a shirt and I like the color, but then it was too big or too wide or too bright or too whatever. And I never found the right shirt. Just wanted to let you know that, OK? Love you. Bye."

Or that special recipe she knew he'd enjoy.

"Hello, dear one. This is your mother. I’m calling to see how today went and say hi. Nothing important. I was just thinking about you — I’m cooking, and I was thinking how much you would like this recipe. It’s butternut risotto. Bye."

And, like many moms of busy 21-year-olds, Dawn understood that sometimes life gets in the way.

“Hi, it’s Mom calling, Charles. The fact that it went straight to voicemail tells me that you’re very busy, so I guess I won’t bother you. Say hi to Nico.”

"At first, it was kind of funny," Frank said. "I clicked three voicemails in a row where my mom said the exact same, 'Hi, Charles. It's Mom!'"

But soon his laughs made way for mixed feelings of guilt and gratitude.

"As I dove deeper and deeper in my inbox, I felt more and more humbled," Charles says. His mother's curiosity and selfless spirit struck a chord.

The 38 voicemails and 20 hours of home videos inspired Charles to create a short film, "My Baby You'll Be."

The film, which you can watch below, is narrated by the real voicemails Charles' mother left on his phone and features footage of both Charles' present-day life and the home video memories of his youth.

It definitely tugs at the heartstrings of anyone who's realized they've failed to reciprocate the same care given to them by a loving parent.

"Part of my hope is that an audience could watch this and reflect on their own relationship with their mother," Charles said, hoping that the film serves as a reminder not to overlook the gift of unconditional love.

"By the end of the film, it was a Kleenex moment for me," Dawn told Upworthy of the first time watching her son's film. "Tears won out."

Although the film shows a young man who seems to have taken his mother's love for granted, Dawn said the man on-screen doesn't reflect the Charles she knows.

"I carry with me the certainty that if I called Charles and said I needed help, he would be here as fast as car, ferry, or boat could deliver him. That is a wonderful gift."

If there's one thing Charles knows, it's that he will never forget the lessons he learned from his mom.

He remembers one time, when he was bent out of shape over where a relationship was headed, his mom gave him excellent advice about letting go of the ones you love because, if the feelings are mutual, they'll return when the time is right.

In making the film and working through the feelings of guilt he had about distancing himself from his mom, her advice began to take on a new meaning.

"I'm realizing that philosophy doesn't just pertain to romantic relationships," Frank said. "Friendships and family work the same way. I am so grateful that my mother let me go, and I hope that she sees this film as a step toward my return."

Watch Frank's short film, "My Baby You'll Be," below: