A man is free after over 45 years. See how artists helped make a difference. 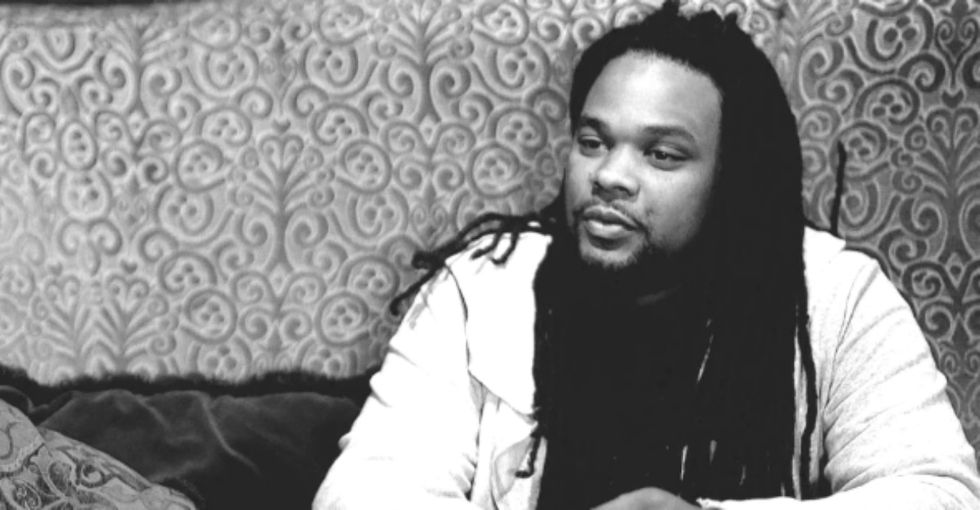 On Feb. 19, 2016, Albert Woodfox turned 69 years old. On that same day, he walked out of a Louisiana prison a free man after serving over 45 years — 43 of them in solitary confinement, which is longer than anyone else in U.S. history.

It was, as he told DemocracyNow!, "quite the birthday gift."

All images via Canvases of Courage/Vimeo.

Woodfox's case had long been the object of passionate protest and advocacy from civil and human rights groups around the world who believed that the 23 hours a day he spent in a 6-foot-by-9-foot cell for over half of his life was not only inhumane but particularly unfathomable for a man whose charges were believed to be based on false evidence and politically motivated. (To learn more about his case, do some research on The Angola Three, the name given to him and two others placed in solitary confinement for the same event in 1972.)

When news of the 69-year-old's release spread, thousands across the country rejoiced.

How and why did so many people know about a man incarcerated over 45 years ago?

There are probably many reasons. But an undeniable factor in the spread of one man's unjust treatment was the fact that more than once, the story of Woodfox's case, imprisonment, and resilience has been told through arguably the most universal language known to man: art.

The artists who participated, convened by Art for Amnesty's creative director Marvin Bing, are those who see their purpose as not only to tell stories that reflect the rich diversity of cultures and experiences that they know as artists of color. They also believe it is their responsibility to tell stories that tangibly make people's lives — and the world — better.

Woodfox's case was one of those stories.

Philadelphia artist Jesse Krimes, who himself spent a year in solitary confinement in federal prison, built a simulated cell for the installation for people to experience the size of such inhumane imprisonment. Artsit Brandan "B-Mike" Odums did just that, standing in it to "physically step inside that reality, that physical space" and bring another level of empathy to the mural tribute to Woodfox that he would be painting.

A New Orleans native, Odums ascribes to the idea that art's purpose is to speak truth.

" I can't pretend to speak my truth without trying to embody a sensitivity to the sufferings of everyday people. ... It's important that we keep saying these people's names, that we keep telling their stories so that we can't escape from the reality of what is happening. "

Woodfox's story was just the tip of the iceberg for other cases creatively rendered that day.

Artist Katie Yamasaki's work told the story of Teodora del Carmen Vásquez, an El Salvadoran woman sentenced to 30 years in prison for "aggravated homicide" after suffering a still-birth at work.

Teodora, mother of an 11-year-old boy, was expecting a new baby when she started experiencing increasingly severe pain. She called emergency services, but before they arrived, she went unconscious and ultimately gave birth.

When she woke up, she was bleeding profusely and her newborn baby was dead. When police arrived, they took her to the hospital where she could get the urgent treatment she needed. But not before handcuffing and arresting her on suspicion of murder.

In El Salvador, women who miscarry or suffer a still-birth during pregnancy are routinely suspected of having had an abortion. Abortion under any circumstance is a crime, even in cases of rape, incest, or where a woman’s life is at risk.

Making the artwork even more meaningful, Yamasaki was an expectant mother herself.

But, she said, telling Teodora's story during her own pregnancy was especially emotional and poignant.

Artist Douglas Miles had a similarly personal reason for his piece on the plight of an imprisoned cartoonist.

As a Native American, Miles believes his role is very clearly "to push back against institutional racism." His work highlighted the Malaysian political cartoonist Zunar, who was imprisoned after posting tweets condemning the jailing of an opposition leader in his country.

Miles said he appreciates the powerful role that social media plays in expanding audience's access to their work which otherwise would not be seen galleries and museums. With that, and the ongoing oppression of Inidigenous peoples, in mind, he visually represented Zunar's story.

Artist Jessica "J-Hand" Strand chose to create a piece exploring the life of Saman Naseem, a 17-year-old juvenile offender who was tortured and still awaits a fair trial.

Previous activism already resulted in Saman's death sentence being stopped. But now, still imprisoned at 21 years old, he has yet to be retried.

Strand's passion for the case connects directly to her roots in New Orleans, a city known for its high levels of incarceration.

Her final work was a visually stunning depiction of not just Saman but of the impact of vision through the lens of torture and imprisonment.

Those are just four of the 12 stories immortalized that day.

From Jerome Lagarrigue's piece highlighting the story of a vicious LGBTQ hate crime in Athens, Greece, to Hebru Brantly's visual reminder that "all truths aren’t considered free" to Bayunga Kialeuka's mural challenging the unjust police regime in the Congo — each brought with it its own astounding level of "I can't believe this is happening in the year 2015. And something must be done."

Fortunately, Amnesty International provided an opportunity to do a powerful something for the over 4,500 attendees who came to watch the artists and show their support at the free event.

The day's events were connected to Amnesty International's Write for Rights, a global letter-writing campaign encouraging people all over the world to write letters in protest of these and other open human rights cases.

When curating the show, Bing knew the art's ultimate power to inspire empathy and action must be met with immediate opportunities to harness the shock, outrage, and passion for justice into something tangible and impactful.

The art's inclusion in that campaign wasn't simply a creative addition to the ongoing work for justice and human rights. It brought hope that our expression, our voices can indeed make a difference.

It was a hope that for Albert Woodfox was finally realized months later when the tireless efforts of activists, lawyers, letter-writers, and, yes, also artists finally paid off.

The artists in New Orleans and the cases that they selected were featured in a beautiful short film "Canvases of Courage," directed by Gerard Bush and Christopher Renz (Bush|Renz) and executive produced by Bing with the support of Amnesty International USA and Art for Amnesty. The film premiered in January 2016 during Golden Globes weekend and is now traveling the country. Take a look to see each of the beautiful murals in full and hear the artists also share their own story.