A homeless woman reminded her of her mom. She sold everything to help. 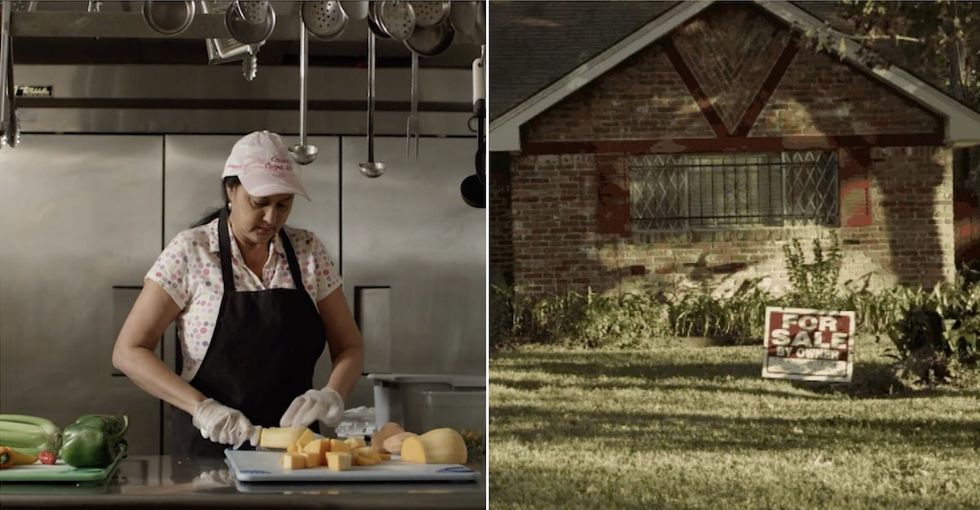 What would you do if you had five years to live? One year? A month?

That's the question Houston-based Isha Desselle asked herself in 1986 after returning from a trip to India, where she saw too many homeless people to count.

One of them spent her nights rolled up "in a little bag," and Desselle said she looked like her mother. The thought brought her to tears.

"My mother was tough, in a very soft way," Desselle recalls. "She built our house in Trinidad, mixing water, sand, and stone. She taught us everything, especially charity. She's the one who instilled that in our life. On the weekends, we would go to the market, and she would feed the beggars."

It's a question many of us have asked: You may be thinking it right now as you sit and read this. What do you want to do with your life?

Desselle knew she wanted to help others. The choice she made was extraordinary. After grappling with how she could do the most good, she sold her house and all of her belongings, giving her enough money for a fresh start. But it wasn't for her.

"I sold my home and everything I had," Desselle says, "put a down payment on a rundown apartment complex. It was like this is it. It just felt right."

Her goal? To turn the complex into a safe place for elderly people without a home. But though her intentions were good, Desselle says she was stymied at every turn. "I went to United Way," she remembers, "and they told me I wouldn't make it because I didn't have the experience; I didn't have the education."

The rejection didn't make Desselle weaker. It fueled her resolve. No one was going to tell her what she could or couldn't do.

So she moved into the apartment complex herself and began to help those who were already living there. When they didn't have food, Desselle walked to butcher shops and asked for bones. She went to produce markets and asked for vegetables. "We had that every day," she says.

And then the people came. Soon the elderly homeless residents of Desselle's neighborhood started coming for assistance. Sometimes she'd have up to 40 people in her tiny kitchen. "And everyone helped out," she says. Desselle began feeding more than 200 homeless people a day.

She sold everything for those with nothing.

Imagine what the world would be like if we all had this woman's compassion. (via Muse Storytelling)

America has a homelessness crisis.

According to data collected in 2017, more than 500,000 people are homeless on any given day in the United States. That number includes 58,000 families with kids. As the cost of living gets higher and higher, more and more people can't afford a place to live. Many are spending nights on the street or in transitional housing.

In Houston, specifically, more than 4,000 people are either spending nights on the street or living in temporary shelters while they work to get back on their feet. The good news is that this number is only half of what it was in 2011. And the answer is often more affordable housing.

That's why Houston's commitment to help people get off the street is so important — and why people like Desselle are so instrumental in the fight to end homelessness. They persevere even in the face of adversity, inspiring all of us to work harder to make a difference.

That's what Desselle's mother used to say. She's taken it to heart. "I picked that up because I watched her in action."

Her goal? To change the lives of the elderly people forced to live on the street. Since Desselle first started the Turning Point Center, she's helped more than 37,000 of Houston's homeless population.

"They come in with a frown, the destitution in their face," Desselle says. "And you take them to the clothing room, let them have a shower, change into something new. Their whole outlook changes."

The biggest thing that the center can offer? Hope and respect for the human spirit. The residents who stay on for lengthy periods of time help out others who live there too.

"We see the person inside," she says. "They're not a number. There's someone in there. There's hopes; there's dreams. You give them a chance. You change the outlook of them, and the inside changes too."

Desselle's mission should inspire anyone thinking about what to do next. Because our goal should be to bring out the good in this world.

"I don't think money, power, or position could ever buy what I receive in helping people," Desselle says. "I made a home where elderly homeless people can go, and I have lived my dream. I'll probably die with a smile on my face."

You can help, too.

If there's one thing we can learn from this story, it's that all of us have the power to make a difference. No, we're not all going to sell our belongings and devote our lives to helping others (and that's OK!), but we must all make a commitment to help our fellow humans and make the world a kinder, warmer place.

Want to help? You can start by volunteering at a shelter, where help is always needed. You could create care kits — packages full of essentials like socks and toiletries — to hand out, especially during the cold season. You can write to your legislators and urge them to support measures that protect the homeless and push for affordable housing. Start small, and you too could be making a world of difference.