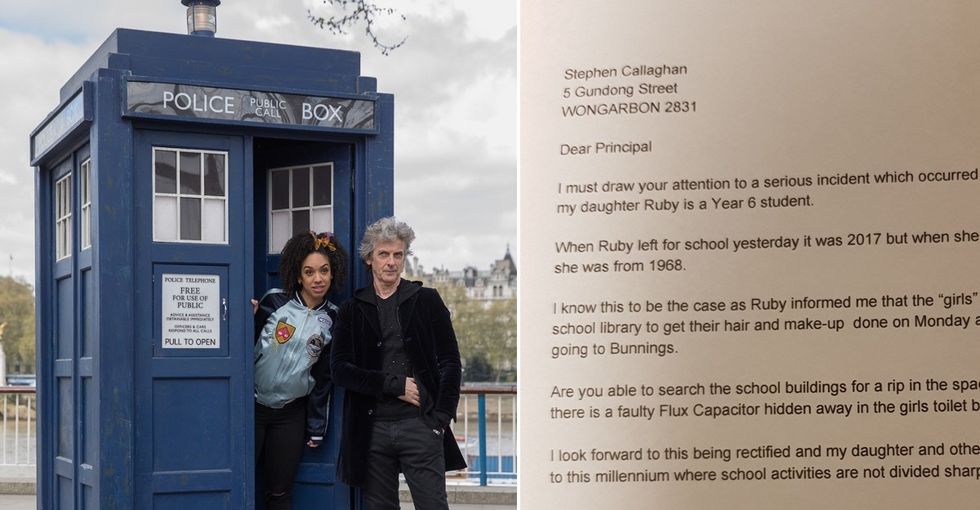 Earlier this week, Stephen Callaghan's daughter Ruby came home from school. When he asked her how her day was, her answer made him raise an eyebrow.

Ruby, who's in the sixth grade at her school in Australia, told her dad that the boys would soon be taken on a field trip to Bunnings (a hardware chain in the area) to learn about construction.

The girls, on the other hand? While the boys were out learning, they would be sent to the library to have their hair and makeup done.

Ruby's reply made Callaghan do a double take. What year was it, again?

Callaghan decided to write a letter to the school sharing his disappointment — but his wasn't your typical "outraged parent" letter.

"Dear Principal," he began. "I must draw your attention to a serious incident which occurred yesterday at your school where my daughter is a Year 6 student."

"When Ruby left for school yesterday it was 2017," Callaghan continued. "But when she returned home in the afternoon she was from 1968."

The letter goes on to suggest that perhaps the school is harboring secret time-travel technology or perhaps has fallen victim to a rift in the "space-time continuum," keeping his daughter in an era where women were relegated to domestic life by default.

"I look forward to this being rectified and my daughter and other girls at the school being returned to this millennium where school activities are not sharply divided along gender lines," he concluded.

I must draw your attention to a serious incident which occurred yesterday at your school where my daughter Ruby is a Year 6 student.

When Ruby left for school yesterday it was 2017 but when she returned home in the afternoon she was from 1968.

I know this to be the case as Ruby informed me that the "girls" in Year 6 would be attending the school library to get their hair and make-up done on Monday afternoon while the "boys" are going to Bunnings.

Are you able to search the school buildings for a rip in the space-time continuum? Perhaps there is a faulty Flux Capacitor hidden away in the girls toilet block.

I look forward to this being rectified and my daughter and other girls at the school being returned to this millennium where school activities are not sharply divided along gender lines.

When Callaghan posted the letter to Twitter, it quickly went viral and inspired hundreds of supportive responses.

Though most people who saw his response to the school's egregiously outdated activities applauded him, not everyone was on board.

One commenter wrote, "Sometimes it is just ok for girls to do girl things."

But Callaghan was ready for  that. "Never said it wasn't," he replied. "But you've missed the point. Why 'girl things' or 'boy things'... Why not just 'things anyone can do?'"

He later commented that he didn't think the school's plan was malicious, but noted the incident was a powerful example of "everyday sexism" at work.

Callaghan says the school hasn't responded to his letter. (Yes, he really sent it.) At least, not directly to him.

Some media outlets have reported that the school claims students are free to opt in and out of the different activities. But, as Callaghan says, gendering activities like this in the first place sends the completely wrong message.

In response to the outpouring of support, Callaghan again took to Twitter.

"At 12 years of age my daughter is starting to notice there are plenty of people prepared to tell her what she can and can't do based solely on the fact she is female," he wrote.

"She would like this to change. So would I."