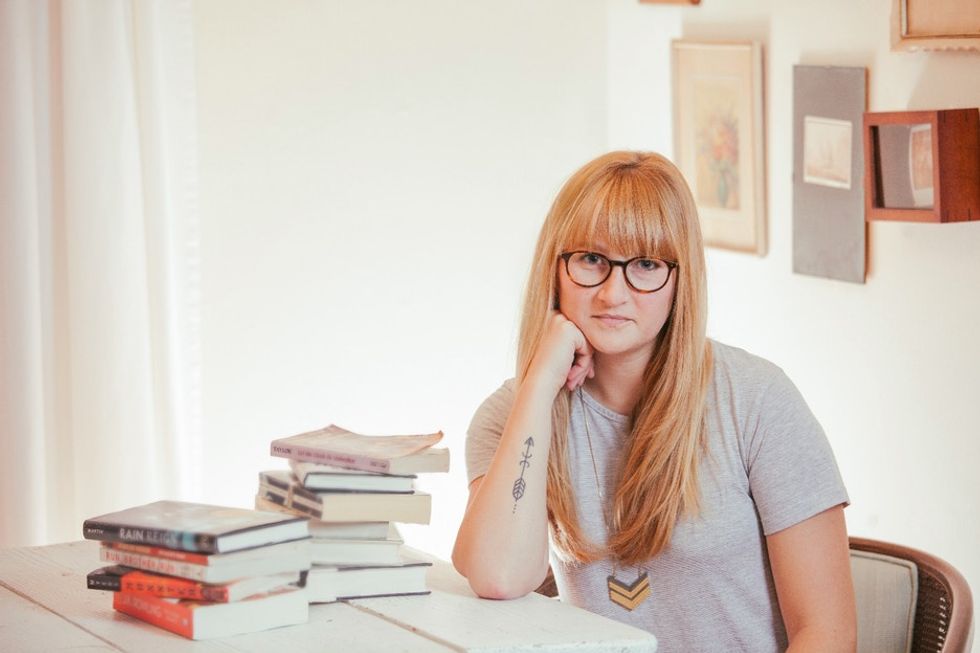 Fifth-grade teacher Emily E. Smith is not your ordinary teacher.

She founded The Hive Society — a classroom that's all about inspiring children to learn more about their world ... and themselves — by interacting with literature and current events. Students watch TED talks, read Rolling Stone, and analyze infographics. She even has a long-distance running club to encourage students to take care of their minds and bodies.

Smith is such an awesome teacher, in fact, that she recently received the 2015 Donald H. Graves Award for Excellence in the Teaching of Writing.

It had always been her dream to work with children in urban areas, so when Smith started teaching, she hit the ground running. She had her students making podcasts, and they had in-depth discussions about their readings on a cozy carpet.

But in her acceptance speech for her award, she made it clear that it took a turning point in her career before she really got it:

"Things changed for me the day when, during a classroom discussion, one of my kids bluntly told me I "couldn't understand because I was a white lady." I had to agree with him. I sat there and tried to speak openly about how I could never fully understand and went home and cried, because my children knew about white privilege before I did. The closest I could ever come was empathy."

She wanted to move beyond just empathy and find a way to take some real action that would make a difference for her students.

She kept the same innovative and engaging teaching methods, but she totally revamped her curriculum to include works by people who looked like her students. She also carved out more time to discuss issues that her students were facing, such as xenophobia and racism.

And that effort? Absolutely worth it.

As she said in her acceptance speech:

"We studied the works of Sandra Cisneros, Pam Munoz Ryan, and Gary Soto, with the intertwined Spanish language and Latino culture — so fluent and deep in the memories of my kids that I saw light in their eyes I had never seen before."

OK it was probably a LOT more subtle. GIF via "Toddlers and Tiaras."

The changes Smith made in her classroom make a whole lot of sense. And they're easy enough for teachers everywhere to make:

— They studied the work of historical Latino figures, with some of the original Spanish language included. Many children of color are growing up in bilingual households. In 2007, 55.4 million Americans 5 years of age and older spoke a language other than English at home.

— They analyzed the vision of America that great writers of color sought to create. And her students realized that our country still isn't quite living up to its ideals. Despite progress toward racial equality with the end of laws that enforced slavery or segregation, we still have a long way to go. Black people still fare worse than white people when it comes to things like wealth, unfair arrests, and health.

— They read excepts from contemporary writers of color, like Ta-Nehisi Coates who writes about race. Her students are reading and learning from a diverse group of writers. No small thing when they live in a society that overwhelmingly gives more attention to white male writers (and where the number of employees of color in the newspaper industry stagnates at a paltry 12%).

— They read about the Syrian crisis, and many students wrote about journeys across the border in their family history for class. The opportunity particularly struck one student; the assignment touched him so much that he cried. He never had a teacher honor the journey his family made. And he was proud of his heritage for the first time ever. "One child cried," Smith shared, "and told me he never had a teacher who honored the journey his family took to the United States. He told me he was not ashamed anymore, but instead proud of the sacrifice his parents made for him."

I know you're tearing up right along with me. GIF via "The Office."

Opportunities like this will only increase as the number of children from immigrant families is steadily increasing. As of 2013, almost 17.4 million children under 18 have at least one immigrant parent.

Smith now identifies not just as an English teacher, but as a social justice teacher.

Smith's successful shift in her teaching is an example for teachers everywhere, especially as our schools become increasingly ethnically and racially diverse. About 80% of American teachers are white. But as of last year, the majority of K-12 students in public schools are now children of color.

As America's demographics change, we need to work on creating work that reflects the experiences that our students relate to. And a more diverse curriculum isn't just important for students of color. It's vital for everyone.