30 years on death row but you're innocent. When you're freed, the prosecutor comes to apologize.

He was freed from death row after spending 30 years there wrongfully. Now Glenn Ford is dying, and he can't forgive the remorseful prosecutor who put him there. 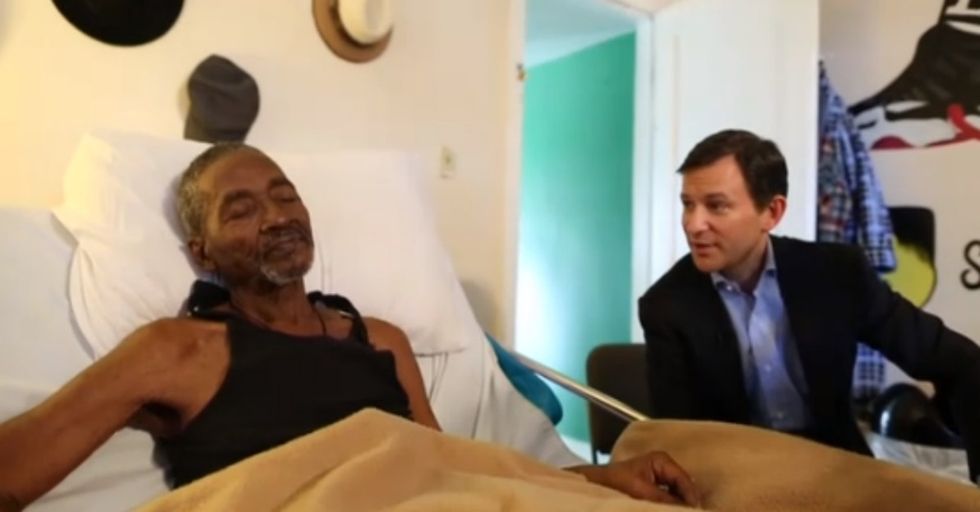 It's a haunting story. Glenn Ford spent 30 years on death row for a crime he didn't commit.

He was convicted by an all-white jury, and evidence regarding his whereabouts and the murder weapon (which would have swayed them to acquit) were suppressed, according to Ford's attorneys. Finally, when they re-opened his case and introduced the evidence that proved he wasn't the murderer and wasn't even present at the murder scene, his conviction was nullified.

Now, as he lays dying, the prosecutor who put him there has a heart full of regret for how the case was handled.

Attorney Marty Stroud knows he can never erase what happened, but here is his new perspective (from the Shreveport Times):

"Had I been more inquisitive, perhaps the evidence would have come to light years ago. But I wasn't, and my inaction contributed to the miscarriage of justice in this matter. Based on what we had, I was confident that the right man was being prosecuted and I was not going to commit resources to investigate what I considered to be bogus claims that we had the wrong man.

My mindset was wrong and blinded me to my purpose of seeking justice, rather than obtaining a conviction of a person who I believed to be guilty. I did not hide evidence, I simply did not seriously consider that sufficient information may have been out there that could have led to a different conclusion. And that omission is on me.

Furthermore, my silence at trial undoubtedly contributed to the wrong-headed result.
I did not question the unfairness of Mr. Ford having appointed counsel who had never tried a criminal jury case much less a capital one. It never concerned me that the defense had insufficient funds to hire experts or that defense counsel shut down their firms for substantial periods of time to prepare for trial. These attorneys tried their very best, but they were in the wrong arena. They were excellent attorneys with experience in civil matters. But this did not prepare them for trying to save the life of Mr. Ford.

The jury was all white, Mr. Ford was African-American. Potential African-American jurors were struck with little thought about potential discrimination because at that time a claim of racial discrimination in the selection of jurors could not be successful unless it could be shown that the office had engaged in a pattern of such conduct in other cases.
And I knew this was a very burdensome requirement that had never been met in the jurisprudence of which I was aware. I also participated in placing before the jury dubious testimony from a forensic pathologist that the shooter had to be left handed, even though there was no eye witness to the murder. And yes, Glenn Ford was left handed.

All too late, I learned that the testimony was pure junk science at its evil worst.

In 1984, I was 33 years old. I was arrogant, judgmental, narcissistic, and very full of myself. I was not as interested in justice as I was in winning. To borrow a phrase from Al Pacino in the movie 'And Justice for All,' 'Winning became everything.'

After the death verdict in the Ford trial, I went out with others and celebrated with a few rounds of drinks. That's sick. I had been entrusted with the duty to seek the death of a fellow human being, a very solemn task that certainly did not warrant any 'celebration.'

In my rebuttal argument during the penalty phase of the trial, I mocked Mr. Ford, stating that this man wanted to stay alive so he could be given the opportunity to prove his innocence. I continued by saying this should be an 'affront to each of you jurors, for he showed no remorse, only contempt for your verdict.'

How totally wrong was I."


Unfortunately, this type of miscarriage of justice isn't an isolated one-off case.

According to researcher estimates, about 4.1% of death penalty convictions are erroneous. In other words, for every 100 people on death row, at least four people shouldn't be there. And that's not even looking at those wrongly convicted of smaller crimes with lesser penalties.

Sadly, the people it usually happens to are those who can't afford the most highly qualified defense attorneys and who can't keep paying legal fees to appeal. And they're mostly people of color. The National Exonerations Registry shows that as of 2015, 60% of exonerations after a wrongful conviction were for non-white defendants.

I like to think the best of our country and the people who inhabit it.

I think we all would want to do something to balance the scales of justice if we could.

Well, we can. If you're interested in getting involved, the Innocence Project has 10 ways you can help.