19 powerful photos of queer people refusing to stay knocked down. 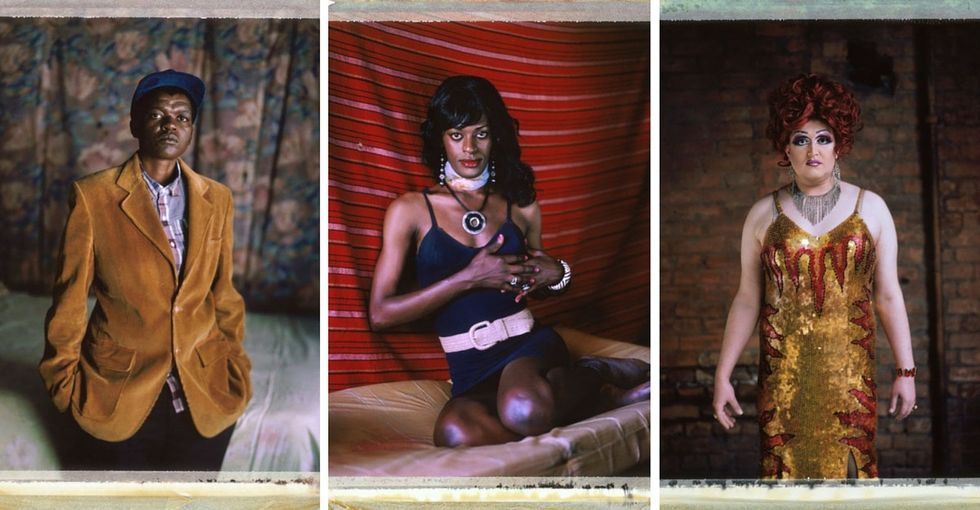 The five young men couldn't risk being seen speaking to a foreigner about what they'd done, so they met secretly with Robin Hammond in his hotel room.

The men explained they had been found guilty of practicing homosexuality — a crime punishable by death in Northern Nigeria. Fortunately, their convictions fell short of the most severe sentence, but they still suffered 20-25 lashes each, were ostracized by their families, and effectively became homeless.

1. Ibrahim, Nigeria: "I am gay and proud to be that." Read their story here.

Their stories changed the course of Hammond's career in a big way.

Hammond, a contributing photographer for National Geographic, has been visiting Africa for years capturing the continent through his camera lens. He's witnessed firsthand the extreme homophobia and transphobia that exists in many regions there.

This time felt different though.

“It wasn’t until I’d heard these personal stories that it really became real to me," Hammond, who met with the young men in 2014, told Upworthy. “Very rarely did we ever hear from the survivors of this bigotry.”

Inspired to do more, Hammond launched "Where Love Is Illegal" in May 2015 with $20,000 from the Getty Images Creative Grant. The online project documents stories and photos of LGBT people who've been persecuted for their sexual orientation or gender identity.

2. Lindeka, South Africa: "Ever since my friend was killed, I hate men." Read their story.

As Hammond put it, "These people are saying, ‘You can discriminate against me, you can beat me, you can call me names. But you won’t silence me.’”

"Where Love Is Illegal" evolved into a global movement of storytelling focused on promoting change.

At first, Hammond thought his series would be contained within Africa. But as it grew, so did Hammond's realization that anti-LGBT attitudes are virtually everywhere, and his project should reflect that.

So "Where Love Is Illegal" went global. Hammond has visited seven countries to document LGBT people and their stories thus far — in Africa, Asia, and the Middle East.

3. Nisha, Malaysia: "I was in prison just because of my identity as a Muslim trans woman." Read their story.

4. Yves Serges, Cameroon: "They removed the fuel from a motorcycle and poured it on me." Read their story.

It's crucial to Hammond that the queer people in his photos have control over the way they are portrayed.

“I am an outsider coming into their community and trying to tell their story," Hammond says. "So what I wanted to do in the creation of this work was try and find a way where it wasn’t just my take on it, but the stories were really coming from them, and weren’t just about them."

That's why each person in the project chooses how they are photographed, and the stories complementing each image are written by them, unedited.

6. Wolfheart, Lebanon: "They continued to beat my partner. I could sometimes hear him screaming." Read their story.

7. Grisha, Russia: "I realized that she was very afraid of the publicity this whole situation could bring." Read their story.

8. Darya, Russia: "In the middle of the road, I was suddenly surrounded by eight masked men. In their hands were baseball bats." Read their story.

But Hammond wanted "Where Love Is Illegal" to have even further reach. So he decided to lend his platform to anyone who wanted to utilize it.

The photographer opened up his project to the public, allowing for photo submissions from LGBT people around the world. There are over 100 stories (and counting) featured in the project.

10. Lorenza, Italy: "I went to a psychologist at the urging of my mother, but it didn’t change anything." Read their story.

11. Michael, U.S.: "Growing up in a house of traditional Cuban refugees, it always seemed unspeakable to me that I would be gay." Read their story.

Although the stories are gut-wrenching, the people who tell them "are not what happened to them." They're so much more.

“While the stories that we are sharing are stories of survival — which often mean people are describing some of the most horrendous abuse," Hammond says. "So many of those people, despite what they’ve been through, have come out stronger because of it.”

13. Yuki, Japan: "When I was 18, I almost jumped off an eight-story building in Tokyo." Read their story.

14. Meg, U.S.: "It was like the blind leading the blind. We had no idea how to find our own identities or keep ourselves safe in a society that rejected us." Read their story.

15. Vincenzo, U.S.: "I can’t describe the feeling of fear and violation when someone shows you torn pages of your most secret thoughts after you deny them." Read their story.

Hammond hopes the photos inspire others to fight for change — especially those in countries that have already experienced that change.

Many of the people who've learned about "Where Love Is Illegal" are in developed countries where queer people are generally more free to be who they are, according to Hammond. That's great, because it'll take a worldwide effort to create justice for everyone.

“We can’t let the fight for equality stop at our own borders,” he explained. "It’s not just a nice thing to try and help people outside our own countries, it’s a moral obligation."

16. Arash, Iran: "Here in Turkey, it’s safer than Iran. In Iran, I was worried each time I was leaving the house because of my appearance." Read their story.

17. Nawras, Syria: "I believed in God, despite the beatings and insults and the humiliating and hard words." Read their story.

18. Kurt and Fletcher, Australia: "They thought we were sick — like we chose to be same sex attracted." Read their story.

The effects of "Where Love Is Illegal" is just beginning.

In the coming months, Hammond hopes to launch workshops in countries he's visiting for the project, equipping LGBT people with the tools to tell their own stories in their own communities. This way, each person becomes a catalyst for change.

"I believe in the power of storytelling to connect people," Hammond said. "And if it’s done well, it can move people to take action.”

19. Biggie, Uganda: "I have lived to be recognized as a leader, rugby player, and a feminist who will continue to fight until all of us are ... equal." Read their story.

After all, it takes more than powerful photos to prompt progress.

“None of this really makes any difference unless there’s real change on the ground," Hammond said. "Storytelling and raising awareness is a good thing, but I feel like I will have done a disservice to these people if we don’t actually come together and try to make real change.”

Learn more about global efforts fighting homophobia and transphobia, and support "Where Love Is Illegal" by spreading the word online and donating to Hammond's efforts.