17 assumptions modern newlyweds are sick of people making about their marriages. 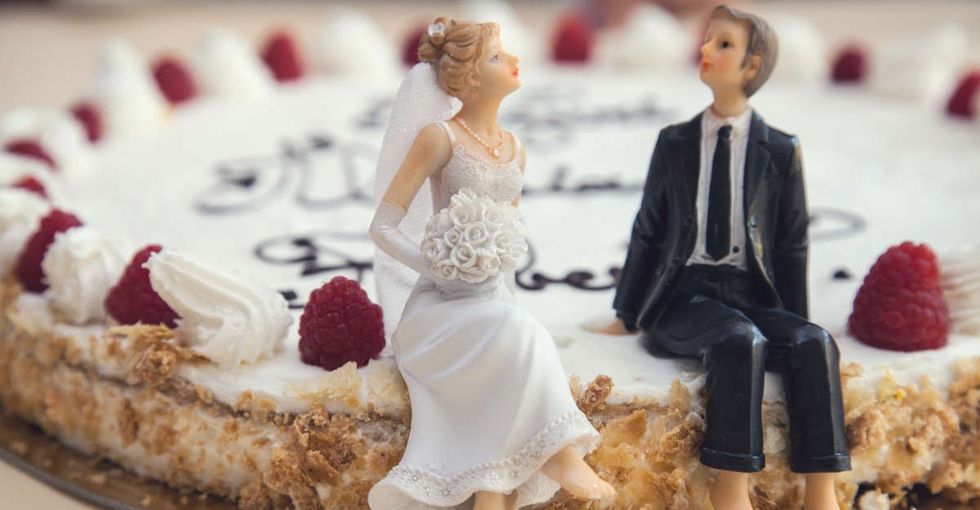 If you just got married, chances are lots of people think they know what your life is like.

These people are totally well-meaning! And also, mostly wrong.

Being married isn't exactly like it used to be. Which is great, as there are so many different, amazing ways to be newlyweds than ever before. But it's also occasionally frustrating, as we newlyweds are frequently forced to dispel a lot of myths about our relationships.

So let's get them out of the way in one fell swoop.

Here are the most common (but mistaken) assumptions strangers make when you're a newlywed couple, and what our lives are really like.

Assumption #1: We went on our honeymoon already, and we left right after the wedding.

Just like we imagined it. Because we did imagine it. Photo via iStock.

Reality: In our dreams, we definitely did — and we had a great time!

In real life, however, most of us can't just take a week (or more) off work at will. The office is hella busy, and on top of that, we live in the only wealthy country in the world that doesn't mandate any paid vacation. Many of us were barely able to get the day of our actual wedding off (ultimately, we compromised with our manager and took a half-day).

We're planning to get to it ... eventually. But it might be a while. We promise we'll send pictures!

Reality: We love being married! But, you know, we actually haven't decided? About babies? We're just enjoying being married right now. But we'll let you know when it happens. We promise.

Assumption #3: We're going to move out of "the city" one day.

So many cheap noodles, so little time. Photo by Anthony Quintano/Flickr.

Reality: It makes sense to assume that, like so many newly married couples in generations past, we're already planning our escape from our local metropolis to a less population-dense area TBD. But many of us who live in the city really, really like it! The city is great. There are good schools here. We can get nachos delivered at 3 a.m.! From either the good nacho place or the OK-but-cheap nacho place.

Sure, some of us are planning to one day move to the 'burbs for more space (and many already are), but many of us aren't. And still others of us who already live in the suburbs are making the suburbs more like the city.

Having a yard is really nice, but so is not having car insurance payments.

Assumption #4: We feel superior to our second-cousin Frieda whose boyfriend of 19 years still hasn't proposed.

Reality: Even though we're feeling pretty good about being married, Frieda and Richard are adults and get to make their own decisions — no matter what Aunt Cindy thinks. Maybe they have financial reasons. Maybe they decided a long time ago they don't want to be married. Maybe they believe marriage is an oppressive, archaic, patriarchal institution that they don't want to participate in, and also they're vegan now.

In any case, leave Frieda and Richard alone.

Reality: So, yeah. Like I said. Really haven't decided about babies. Keeping our options open. But probably not soon? You know?

Assumption #6: One of us changed our last name.

Reality: There's totally nothing wrong with couples who decide that one partner will take the other's last name, of course. But not all of us do. At least 1 in every 5 women decide to keep their maiden names, according to a New York Times survey. And if you haven't taken your partner's last name, it's kind of frustrating to constantly hear yourself referred to as Mr./Mrs. Someone Else (for opposite-gender couples, this pretty much applies exclusively to women).

If you're not sure what last name to use, just ask! We'll tell you what the deal is.

Reality: For those of us who waited to have sex until marriage — which is, of course, totally cool — you might need a supercomputer to tabulate. But lots of us have been together for a long time already and may even have been living together already, so we're probably having whatever amount of sex is normal for us. It's just a regular part of our lives that throwing a wedding doesn't really have a magical impact on.

After many years in a relationship, most of us take "Netflix and chill" quite literally. And seriously.

It. Just. Doesn't. Get. Easier. Photo by happy_serendipity/Flickr.

Reality: Never. We'll be writing these until the end of time.

You will listen to us talk about our trip to Block Island and you will enjoy it. Photo via iStock.

Reality: We're still different people. Each of us is a self-sufficient being with free will. And we're probably totally down to hang out with you, even if our spouse isn't available.

Except you, Greg. We're totally avoiding you.

Assumption #10: We're going to have babies ever.

Reality: So um, like I said, there's actually a chance we might never have babies? We might decide we don't want them after all. We might find out we can't — in which case, these questions might become extremely invasive and painful. We might adopt a child ... who's not a baby. We haven't figured it out yet.

Assumption #11: We never use the garlic press you got us.

Such a great gift. Photo by Lee Kindness/Wikimedia Commons.

Reality: We use it all the time! Thank you so much!

Assumption #12: One of us is going to stay home and take care of the house from here on in.

We will still make the hell out of some lemonade, though. Photo via iStock.

Reality: Some of us might want to be a housewife or husband. Others of us shudder at the thought of giving up our careers, or urging our spouse to give up theirs. Still others of us might want to, but might not be able to forfeit the second income. There's really no right — or standard — way to do it anymore.

Assumption #13: We both have all the same likes, dislikes, preferences, outlooks, and opinions now.

Missy and I have been getting really into '80s ice dancing. Photo via iStock.

Reality: My wife will never convince me to like jazz. And I will probably never convince her to like "Captain Phillips" fan fiction. And you know what? We're OK with that.

For the things that matter, we're committed to presenting a united front. But we're still individuals with different thoughts, feelings, and opinions about what Tom Hanks was up to two weeks before the Somali pirates attacked, 'cause honestly, that's where the real drama of the story probably is.

Help. Someone glued our hands together. Please call the cops. Photo by TanyaVdB/Pixabay.

Reality: Some of us like wearing a physical symbol of our connection and duty to our spouse. Some of us don't as much. So we don't wear them. But don't worry! We're still extreme double married 5000.

Assumption #15: Making us a pink cake that says "baby" on it is going to change our mind about babies.

Reality: It won't. But we will definitely eat that cake.

Assumption #16: Our lives are a lot different now.

Married or not, we still have three more seasons of "Justified" to get through. Photo via iStock.

Reality: Beginning roughly seven seconds after we say, "I do," lots and lots and lots of well-intentioned people ask: "How does it feel?!" seemingly expecting to hear: "So much has changed! We got matching ponies! Being married really is a whole new world!" It feels like we're disappointing them when we answer, "Pretty much the way we did the day before the wedding." Which is silly, since there's no shame in that.

For some couples, life is a lot different after marriage, and that's great. But if stuff is kinda sorta the same, that's OK too! Life was great before. That's why we decided to get married.

Assumption #17: If we're not going to lay out a precise plan for having babies, at least we'll probably get a pet.

Reality: OK. This one is true.