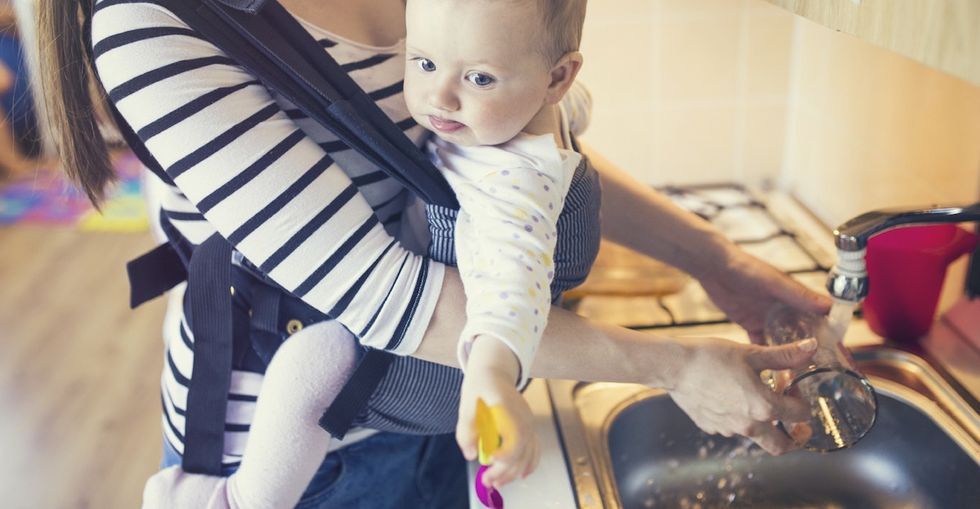 As a parent, it sometimes feels like you're supposed to be fueled entirely by selfless love and a "spiritual connection" to your children.

But you know what? You matter, too! And there's nothing wrong with needing a little soul-nourishment that doesn't end with you on your knees scrubbing barf out of the carpet.

Yes, it's possible to love your kids deeply but also be a little overwhelmed by what your life has become. It's totally normal to need a little more than just love to keep yourself going.

With that in mind, here are 10 things all parents can agree on about the tiny, but hardly insignificant, pleasures of the daily parent-grind.

1. You've determined that one and a half is the perfect number of drinks.

Drinking alcohol is fun! It's also a brief reminder of what it used to be like when you were allowed to have adult fun. But each drink also increases the amount it will suck if and when the kids wake up early or in the middle of the night.

The magic number usually tends to be around two drinks, less the half beer left sitting on your night stand after you've just given up and passed out, netting a perfect 1.5.

2. You hate washing dishes, but you love that warm dishwater.

Children are basically mystical fairies that fill your home with dirty dishes while you aren't looking.

Washing those dishes is an endless, thankless chore, but at least soaking your hands in the hot, frothy water feels kind of nice.

3. You know that silence really is golden.

4. You don't drive just to get places.

Most people think cars are just motorized hunks of metal that take you from Point A to Point B.

Parents know that they are, in fact, complex machines designed to make children fall asleep while you pick up dinner at the drive-through, or even just drive aimlessly through an area without a lot of stoplights.

5. You cherish the days where nothing happens.

Getting up, going to work, eating dinner, and going to bed. That's all we really want.

Any day where no one gets sick, injured, or inexplicably, inconsolably cranky is a success.

Me on Monday morning. Photo via iStock.

Having a young child is kind of like making a bomb out of household items and carrying it around with you. Even if you're really careful, there's a chance it might explode.

Monday (for many of us) means dropping the kids at school or daycare where, short of severe injury or illness, anything that happens after that is their problem.

7. You have a new appreciation for waking up naturally.

I barely remember what this feels like. Photo via iStock.

Being kissed awake by the sun's heavenly rays is so rare that when it does happen, you assume your child must have died in their sleep. But once you confirm that all's well and melt back into a peaceful slumber, there's no better feeling in the world.

8. You know that hot showers are everything.

9. You hang out with other parents to put everything into perspective.

GIF from "A Night at the Roxbury."

Hanging around a bunch of parents is amazing. Everyone's wearing sweats, no one's in shape, and showering is totally optional. Everyone's just trying to get by, OK?

And if you have to go home because your kid's having a meltdown, they're all too busy cutting food into small pieces or monitoring timeout to give you the side-eye.

10. You drink coffee like it is the source of all life.

Drinking coffee doesn't really have the same effect as getting more sleep, but it's possible to convince yourself otherwise. Sometimes, though, you'll drink coffee too late in the day and have trouble sleeping.

The only solution to that? Yep. More coffee.

Being a parent is hard. It's OK to admit it.

At least, that's how it can feel.

But psychiatrist Gail Saltz told TODAY Parents, "You have to put your oxygen mask on first," so to speak. "If you go to pieces, everyone is going down with you."

That's why we're all so desperate for that spa day or for a beer with friends. But it might be a while before we can get one on the books.

In the meantime, it pays to look for the little moments in between that give us the juice we need to keep going.