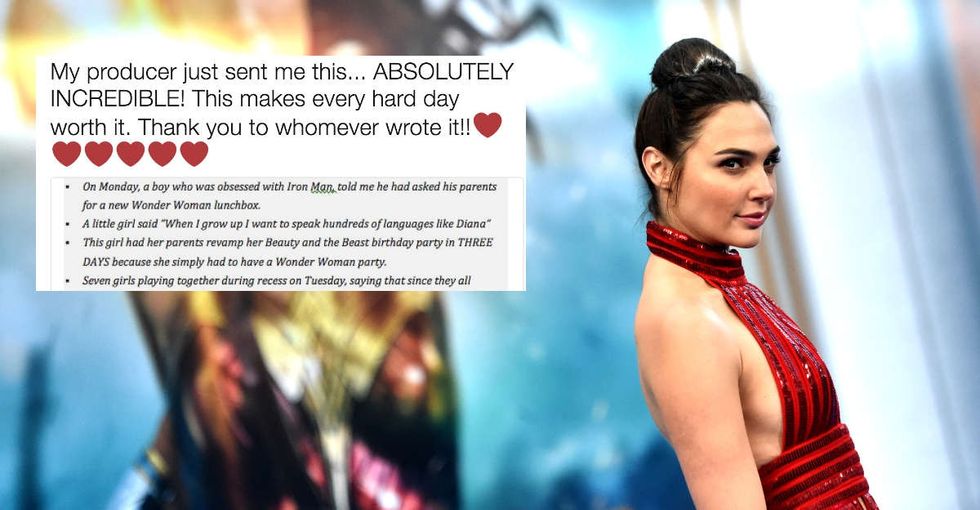 "Wonder Woman" is shattering box office records, but the effect the movie is having on one kindergarten class might be an even bigger victory.

On Sunday, "Wonder Woman" director Patty Jenkins tweeted a note her producer received from an elementary school teacher detailing 11 ways the movie has already created a new culture in the classroom.

My producer just sent me this... ABSOLUTELY INCREDIBLE! This makes every hard day worth it. Thank you to whomever w… https://t.co/p9sNB5Go1n
— Patty Jenkins (@Patty Jenkins)1497221117.0

Some of the highlights include:

And this is just from one kindergarten classroom.

Predictably, people on Twitter were pretty charmed and inspired by the kindergarten classroom's adoration of the movie.

The note put many in touch with their inner superhero-loving child.

Others confirmed that the movie has been a smash — with children of all genders.

@PattyJenks After seeing the film, a little boy was determinedly doing Amazon fight moves in the hall and looked at… https://t.co/5pm6Ka7z66
— Rachel Ward (@Rachel Ward)1497222799.0

"Wonder Woman" gave the kindergarten girls a crash course in collaborative leadership — and that's not an accident.

While some studies have shown that superhero movies increase aggression among children, other experts have found that creative superhero play can teach kids to handle adversity without resorting to violence as well as critical negotiation skills.

Meanwhile, the film teaches boys a critical lesson about empathy.

Various studies have shown that consuming media that encourages viewers to identify with members of groups unlike themselves can lead viewers to develop empathy for those groups.

The movie's incredible symbolic value is becoming clear — and not to just young children.

Earlier this month, the Legion of Women Writers launched a fundraising campaign to send 70 high school-age girls to see the film.

In May, Austin's Alamo Drafthouse announced it would be holding women-only screenings of "Wonder Woman," and after backlash — and backlash to the backlash that was joined by Austin's mayor, among others — they decided to expand the screenings nationwide.

"Wonder Woman" is already changing the way American kids think about the types of heroes women can be and the spaces women can take up — and that's a good thing.

It might only be evident in one classroom for now, but there are classrooms just like it across the country and around the world.

And when the generation raised on Patty Jenkins' film grow up, what started out as a trickle could become a wave.