A terrible letter gets an absolutely epic response from Austin Mayor Steve Adler. 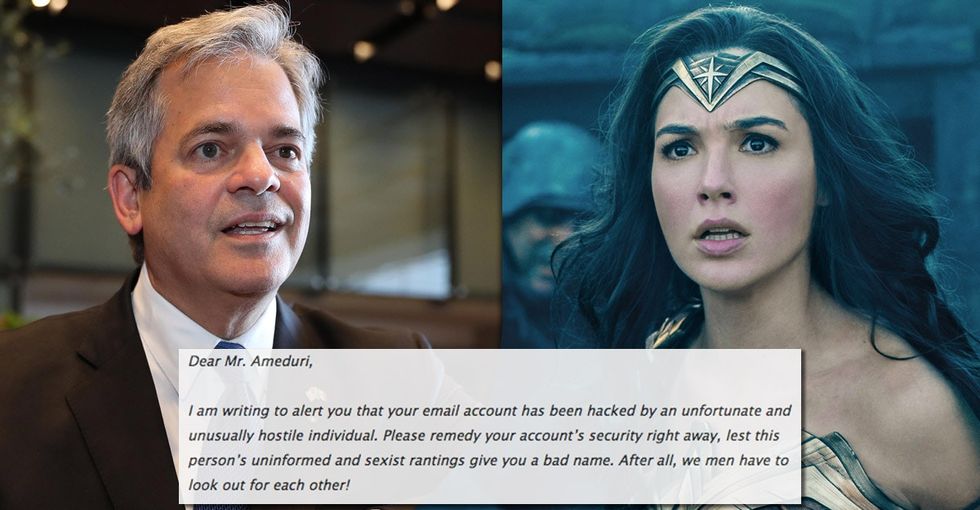 As you may know, a couple of Alamo Drafthouse movie theaters have decided to hold a handful of extra women-only showings of "Wonder Woman," all in good fun.

And as you may also know, some dudes freaked out big time over this news. It's a whole thing *sigh*, and as Upworthy's own Eric March wrote, it's why we can't have nice things anymore.

One of these dudes decided to channel his rage over the women-only screenings into a letter to the mayor of Austin, Texas, home to one of the theaters offering a women-only showing.

Hold on to your hats because this is a wild ride:

"I hope every man will boycott Austin and do what he can to diminish Austin and to cause damage to the city’s image. The theater that pandered to the sexism typical of women will, I hope, regret it’s decision. The notion of a woman hero is a fine example of women’s eagerness to accept the appearance of achievement without actual achievement. Women learn from an early age to value make-up, that it’s OK to pretend that you are greater than you actually are. Women pretend they do not know that only men serve in combat because they are content to have an easier ride. Women gladly accept gold medals at the Olympics for coming in 10th and competing only against the second class of athletes. Name something invented by a woman! Achievements by the second rate gender pale in comparison to virtually everything great in human history was accomplished by men, not women. If Austin does not host a men only counter event, I will never visit Austin and will welcome its deterioration. And I will not forget that Austin is best known for Charles Whitman. Does Austin stand for gender equality or for kissing up to women? Don’t bother to respond. I already know the answer. I do not hate women. I hate their rampant hypocrisy and the hypocrisy of the 'women’s movement.' Women do not want gender equality; they want more for women. Don’t bother to respond because I am sure your cowardice will generate nothing worth reading."

There is a lot going on here.

First of all, Ameduri's letter veers wildly from "I do not hate women" to calling women "the second rate gender." Not to mention the plethora of factual inaccuracies peppered throughout the letter about the role of women in combat, inventions, and achievements.

Yes, yes, we know, #NotAllMen, but at least *this* man, right? GIF from Justice League.

Luckily, Mayor Steve Adler was up to the task of setting this dude straight.

Adler's response was nothing short of 🔥.

Everyone, say hi to Adler. He'll be playing the role of the superhero in this story. Photo by Lucía Godinez/RCC (GDA via AP Images).

He opened with some epic trolling:

"I am writing to alert you that your email account has been hacked by an unfortunate and unusually hostile individual. Please remedy your account’s security right away, lest this person’s uninformed and sexist rantings give you a bad name. After all, we men have to look out for each other!"

And followed that with a bit of a history lesson, informing Ameduri of the many achievements and inventions women are responsible for:

"Can you imagine if someone thought that you didn’t know women could serve in our combat units now without exclusion? What if someone thought you didn’t know that women invented medical syringes, life rafts, fire escapes, central and solar heating, a war-time communications system for radio-controlling torpedoes that laid the technological foundations for everything from Wi-Fi to GPS, and beer? And I hesitate to imagine how embarrassed you’d be if someone thought you were upset that a private business was realizing a business opportunity by reserving one screening this weekend for women to see a superhero movie."

He wrapped the letter up with a bit more light trolling.

"You and I are serious men of substance with little time for the delicate sensitivities displayed by the pitiful creature who maligned your good name and sterling character by writing that abysmal email. I trust the news that your email account has been hacked does not cause you undue alarm and wish you well in securing your account."

And then the kicker, proving just how nice a guy Adler is:

"And in the future, should your travels take you to Austin, please know that everyone is welcome here, even people like those who wrote that email whose views are an embarrassment to modernity, decency, and common sense."

Adler's mic-droppingly wonderful response inspires hope for a world less filled with fools like our dear letter-writer. Until then ... oof! Hera, give us strength we need to wade through this kind of sexist nonsense.