Why the homeless need their pets. 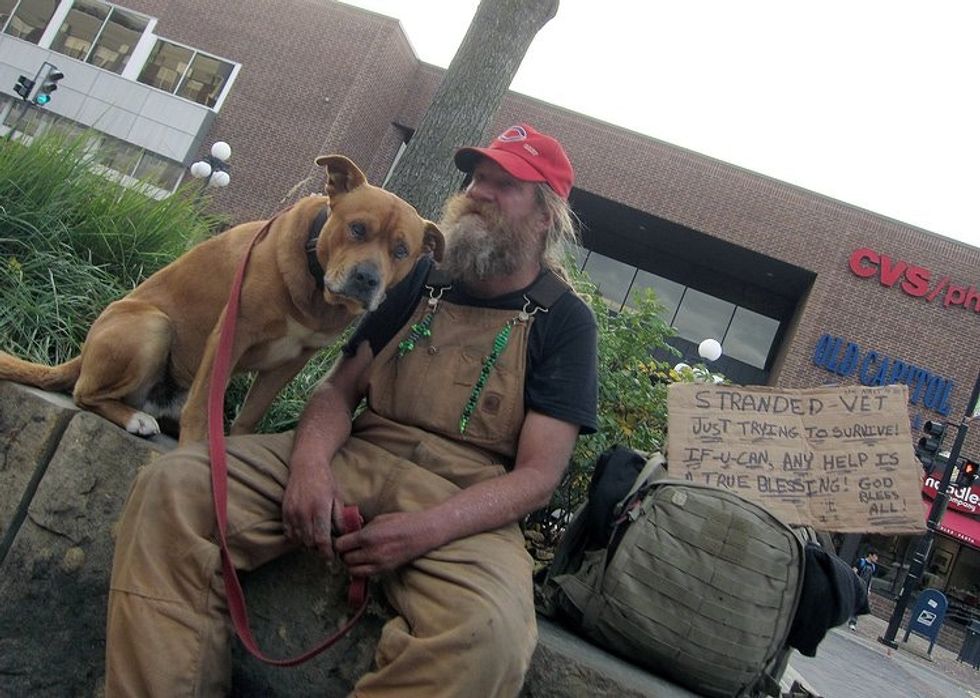 Image by Alan Light via Flick

It’s not uncommon for people passing a homeless person with a dog on the street to voice sympathy for the animal and derision for the human.

Often based on the assumption that a homeless individual is just using a pet for warmth or to guilt people into giving them money, it’s easy to argue that people who can’t take care of themselves could be subjecting animals to deprivation and risk.

This skepticism is so baked into society that some people apparently consider it acceptable to cut the leashes of homeless people’s animals as they sleep, taking them to a better life. Authorities regularly sweep homeless camps, picking up animals, or grill homeless people for proof of animal ownership they may not have and few pet owners would ever keep on their person.

Yet according to a new study, authored by Michelle Lem of the Ontario Veterinary College at the University of Guelph and published last month in the academic journal Anthrozoos, these attitudes and practices may be woefully misguided.

Homeless people with pets, the study argues, are drastically less likely to get depressed or engage in risky behaviors than those without animal friends.

“These pets are their only friends,” the CBC recently quoted Lem as saying, “the only way that they’ve experienced unconditional love… These pets have saved their lives in many cases.”

Lem’s study was small, based on the experiences of 198 street youths in the Canadian cities of Hamilton, Kingston, Ottawa, and Toronto, only 98 of whom had pets.

But it matches with previous studies and the opinions of experts who add that there’s no reason to think cats, dogs, or any other animals on the street suffer more or receive less love and care than those in homes.

All of this suggests that both we and our social institutions need to seriously reevaluate how we assess and accommodate these extremely common but often-vilified human-animal relationships.

They “encourage a sense of responsibility… reward the fulfillment of that responsibility… [and acting] as silent witnesses, they keep [their owners] from lapsing into risky behavior… [they] allow for the construction of a positive moral identity.”

Irvine speaks with great authority on the subject, in no small part because she used to believe differently. Years ago, in the Colorado Desert, she recalls calling animal control on a homeless man who wouldn’t let her “save” his dog from his rough lifestyle.

But after sitting down to properly study the situation, she changed her tune. Her must-read 2013 book My Dog Always Eats First: Homeless People and Their Animals is perhaps the greatest repository of hard (rather than knee-jerk) information and solid (rather than emotional) arguments on the subject.

Beyond supporting Lem’s conclusions that animals can help homeless people achieve a sense of connection and avoid a downward spiral, Irving’s works point out that, while they may worry about paying for pet food and veterinary services, the homeless tend to be good pet owners.

They almost never use their pets to score sympathy donations, and almost always prioritize feeding their companions before themselves. Sure, they may not have a roof, but many animals—dogs especially—don’t actually need that human construct. What they need is attention and affection, which homeless owners can often offer more of than owners with houses; there’s no guarantee that an owner with an address is any more caring or capable than a homeless owner.

“Homeless people report levels of attachment to their animals that may surpass those found among the domiciled public,” writes Irvine.

Recognition of the benefits of homeless animal ownership is spreading beyond academia these days as well. A number of shelters have opened up around the world that explicitly welcome and provide for homeless companion critters. And even more programs exist to help homeless people find free food, supplies, and veterinary aid for their companions with no risk.

Yet for all the mounting evidence in favor of homeless pet ownership, the vast majority of social services—not just people on the street—still officially reject the idea. In the United Kingdom, only perhaps 9 percent of shelters allow dogs. It’s arguably worse in the United States. More often than not, in order to claim social services, the homeless are compelled to give up their pets.

Meanwhile the services that cater to homeless pet owners are small; Pets of the Homeless, one of the major advocates for homeless companions and a hard-working charity, only has four part-time employees in their Nevada offices with a budget of just over half a million dollars a year.

As a result, many homeless people eager to seek help wind up sleeping on the streets rather than giving up their pets. This means existing attitudes and policies perpetuate homelessness by threatening to take away one of that population’s greatest aids.

This situation isn’t always a result of knee-jerk assumptions like those made by people on the street who want to “save” homeless pets. Often in the US it’s just the result of regulatory restrictions or a lack of capacity that precludes animals from the homeless services equation.

Those policies, Lem’s study and the works of people like Irvine clearly show, need to change. In order to address homelessness, we need to factor in and respect the value of offering people in that situation a form of companionship, support, and responsibility they often need and desire. We need to make pets a part of our homeless services, not just retroactively but proactively as well, perhaps working the homeless into adoption schemes for neglected animals.

As we do, the inevitable outrage over these programs and policy shifts from the “homeless dogs need saving” camp will hopefully spark dialogue in which the hard facts will win out. For now, the next time any of us feel a reactionary twinge of judgment at the sight of a homeless individual with a pet on the streets, we can start by recognizing our feelings for what they are—a stupid, baseless bias.