What Tennessee's fall trees looked like to people with colorblindness — until now.

'I'm glad to have seen it. I just wish I had seen this all my life.' 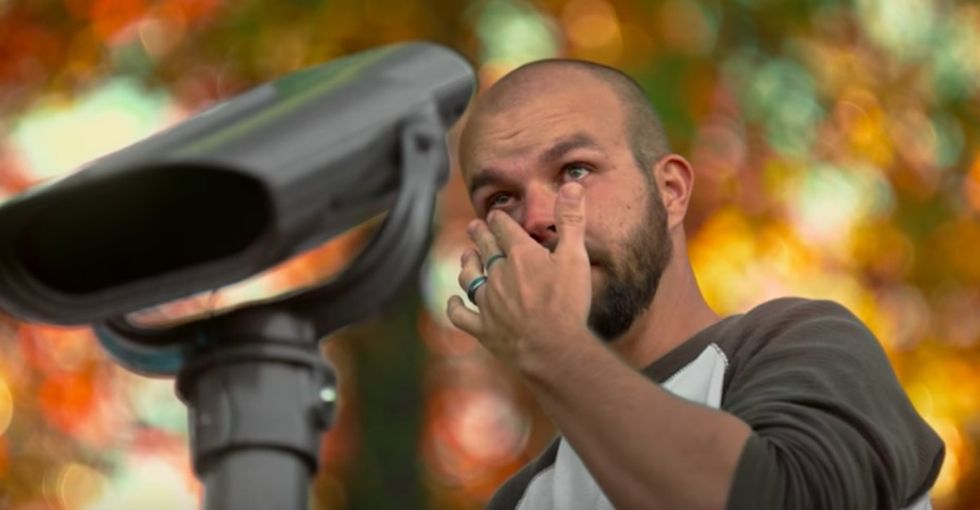 There's a powerful new ad showing how Tennessee is helping make the Smoky Mountains a bit more beautiful this fall for those who have colorblindness.

The Tennessee Department of Tourism Development released something special — the rare instance of a state-sponsored video, featuring the experiences of five people, that genuinely tugs at the heartstrings.❤️

Every October and November, the Great Smoky Mountains are draped in gorgeous shades of reds, yellows, and oranges — sights that draw people near and far to the east side of the state. However, for about 13 million Americans with colorblindness (most of whom are men), the Volunteer State's radiant rolling hills appear as duller, brownish versions of their true selves.

"Everybody at work was saying how pretty the colors are," one man, who has colorblindness, says in the video — a joint effort between the state's department of tourist development and marketing agency VML. "You don't know that you're missing it because you never saw it to begin with."

To make the colorful mountains pop for people who couldn't see them, Tennessee has installed "colorblind-less" viewfinders at three locations in the area.

The viewfinders — installed at Ober Gatlinburg, the westbound I-26 overlook near Erwin, and Big South Fork National River and Recreation Area — are equipped with glass that enables those with red-green colorblindness to see a fuller spectrum of hues, according to Knox News.

For the guys featured in the video — none of whom had ever seen the Smokies in all their red and yellow glory — the special viewfinders brought the brightness of the Tennessee mountains to life.

Here's a before and after view of what they saw in the viewfinder. GIF via TNVacation/YouTube.

Their reactions speak for themselves.

"Wow," one man muttered to himself softly, sniffling, the experience somewhat bittersweet.

"I feel like now I know why people come from miles and states around just to see this."

"[It's] kind of like how I would imagine the difference between here and heaven."

Tennessee didn't have to move mountains, so to speak, to make the Smokies more beautiful to millions of people. There are small things we can all do in our own communities to make our schools, parks, cities, and homes more inclusive for every guest to enjoy. And that's the truly beautiful thing.