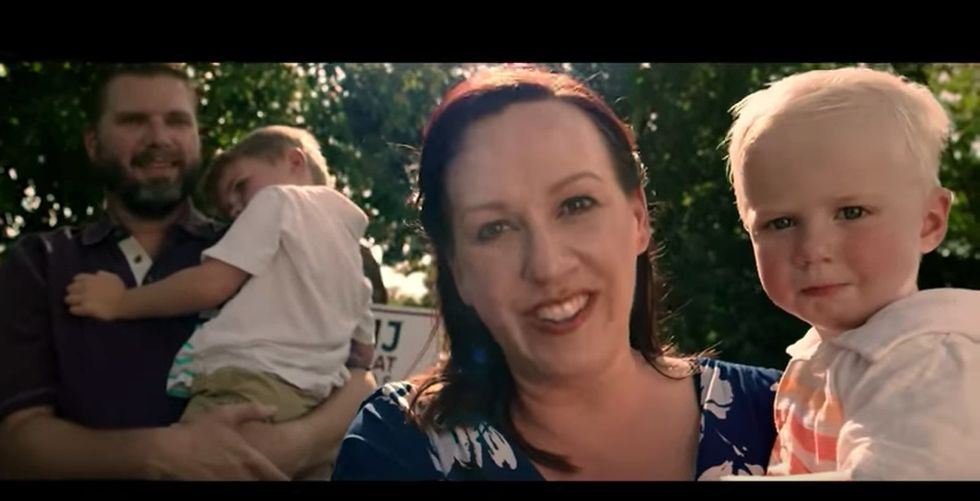 M.J. Hegar has thrived in the face of adversity her entire life.

The 42-year-old Air Force veteran is also an author, wife, and mother. And now she's trying to win in a Texas congressional district that to date has never elected a Democrat.

In late June, Hegar released a campaign video entitled "Doors," which highlighted her life story and her fight against sexism in the military. She won a historic legal fight that overturned the Direct Combat Definition and Assignment Rule that prevented military women from serving in a number of roles.

The video quickly went viral and has been viewed more than 5 million times across Hegar's YouTube and Facebook channels. That's quite impressive for a political ad in a small Texas congressional district, but it wasn’t expected to affect the actual campaign.

And then the donations started pouring in.

Hegar has outraised her Republican opponent by a wide margin, which shows how much her message is resonating.

On July 16, new fundraising numbers were released by the Federal Elections Commission, and the results were stunning: Hegar outraised her opponent, Rep. John Carter (R-Texas) by more than 4 to 1, with $1,171,373 compared to his $266,889.

"The thousands of people who are supporting our campaign show that it is time to show the door to politicians who care more about campaign donors and political parties than protecting our country," she said.

Hegar says that when she tried to meet with Carter to discuss her military reform initiative, his office refused, saying she wasn't a priority because she wasn't a campaign contributor.

Carter's team has denied the claim, but it clearly resonated with donors, who gave her campaign more than $750,000 in just the first 10 days after her video was released.

She still faces an uphill battle — but that's never stopped her before.

Carter is still considered a 10-point favorite according to election forecasters, but that's a big change from 2016 when he won his election by nearly 22 points. And as Alexandra Ocasio-Cortez and others have proven, 2018 is a year primed for historic upsets.

"A lot of people across the country feel like they have absent representation and that their voices are not being heard," Hegar said in a recent interview.

It's a message that's resonating with people, even deep in the heart of red-state Texas.