This mom is recognizing badass women in the most colorful way possible.

This is not your typical art project. 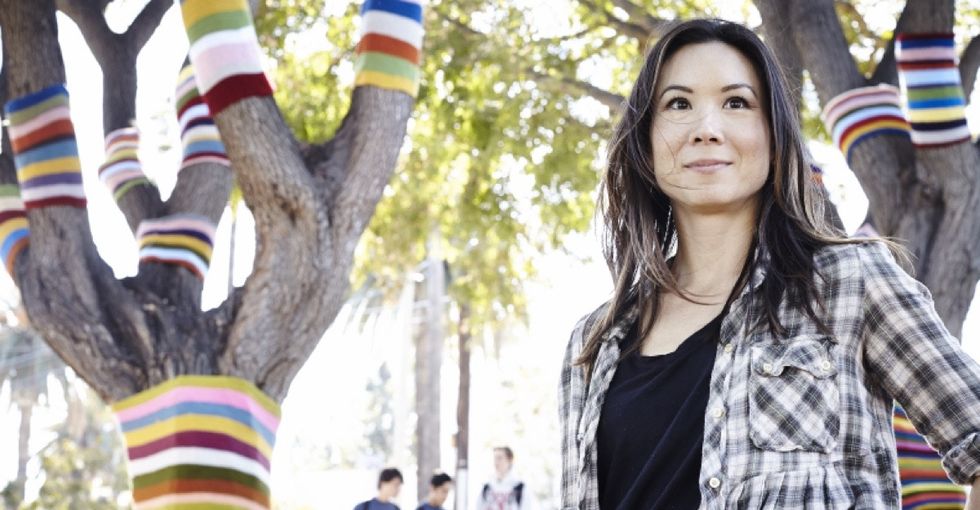 Michelle Villemaire is a mom living in Los Angeles who wants to teach her two daughters about women's history.

Sure, she could just crack open a text book or conduct a few Google searches. But that's not how Michelle rolls. She's more...well, original in her approach.

Michelle is a mom on a colorful mission. All photos from Michelle Villemaire, and used with permission.

Both of her daughters love art, so she decided to use it as a teaching tool to reference strong women of the past.

And that's how she came up with yarn bombing.

Yarn bombing means placing colorful yarn creations on park benches, parking meters, and trees throughout the city. But it's about more than just decoration.

One of many yarn bombs in Michelle's community.

Her girls are completely onboard with the idea.

"My daughters love it," Michelle told Upworthy. "They think it's so beautiful and magical, but most importantly they love the message behind it."

Michelle's 8-year old daughter is excited to help out.

And the community? They're loving it too.

"I've received a ton of compliments and a lot of people braved Los Angeles rush hour traffic just to see the yarn bombs in my neighborhood," She said. "If you live here, you know there's no bigger compliment than that."

And with that, Michelle and her team of 15 volunteers took to the streets to spread good yarn vibes everywhere.

Check out a few of her favorite bombs (and women).

Keep in mind, these designs aren't meant to resemble the women they represent in any way.

Clark was an Icthyologist (a scientist who studies fish) popularly known as “The Shark Lady." She was a pioneer in scuba diving for research purposes and used her fame to promote marine conservation.

This particular yarn bomb was created by Karyn Newbill Helmig, a high school marine biology teacher. And yes, it's a shark — not a bird.

Kochiyama was a human rights activist who spent three years in a Japanese internment camp during WWII.

“I didn't wake up and decide to become an activist. But you couldn't help notice the inequities, the injustices. It was all around you.”  - Yuri Kochiyama

On December 1, 1955, Parks, An African-American woman, refused to give up her seat on a bus for a white passenger.

Her act of defiance and the Montgomery Bus Boycott became important symbols of the modern Civil Rights Movement. She became an international icon of resistance to racial segregation.

“Each person must live their life as a model for others.” - Rosa Parks

Earhart was the first female to fly across the Atlantic Ocean. Sadly, she disappeared over the Pacific ocean during a flight in 1937.

“Women, like men, should try to do the impossible. And when they fail, their failure should be a challenge to others.” - Amelia Earhart

Jemison was an physician and the first African-American woman to travel in space. If that wasn't enough, she also served in the Peace Corps, holds nine honorary degrees, and almost became a professional dancer.

“People may see astronauts and because the majority are white males, they tend to think it has nothing to do with them. But it does.” - Mae Jemison

Keller was an amazing social activist who was deaf and blind.

“The best and most beautiful things in the world cannot be seen or even touched - they must be felt with the heart.”  - Helen Keller

​The benefits of Michelle's work don't end with beautifying the city and teaching people about women's history.

For starters, knitting and crocheting is known to help reduce anxiety and enhance self-esteem. Michelle knows how important that is as she raises her two young daughters.

"I'm going to make sure my little ones create many handcrafts," she said. "Just so we have a nice reserve of self-esteem for high school."

And once the yarn creations are ready to be taken down? Michelle transforms them and donates them to women's homeless shelters in Los Angeles.

This yarn bomb project is touching people through the community. It even got the attention of the Mayor of Los Angeles.

People all over Los Angeles love Michelle's work. Even Mayor Eric Garcetti gave her some props by sharing her yarn bomb video on his Facebook page.

Kudos to Michelle for bringing her community together and celebrating Women's History Month in an extremely colorful way.