Macron granted a heroic man French citizenship. It says a lot about how we treat migrants. 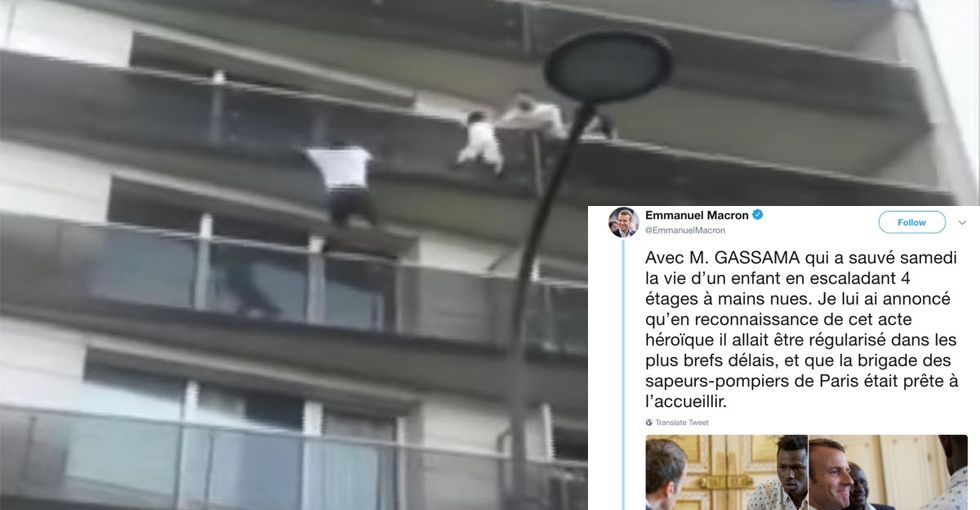 There's a real life Spider-Man walking around in our world, and he's living in France.

In an utterly superhuman move captured on video, 22-year-old Malian Muslim migrant Mamoudou Gassama scaled a several story building to save a baby dangling from a fourth floor balcony.

After noticing a crowd gathering in angst, Gassama saw someone struggling to grab the baby and immediately acted. Leaping from floor to floor, Gassama managed to grab the child and return them safely.

This Malian guy Mamoudou Gassama, who rescued a dangling child in Paris, might be the biggest badass alive. https://t.co/IA1mnJn8oG
— Burgundy Blog (@Burgundy Blog)1527604079.0

People from around the world praised the young man for his pure, selfless actions.

But those aren't the only responses making a difference in Gassama's life.

In addition to praise from commenters around the world, French president Emmanuel Macron offered him citizenship and a job.

Under the French civil code, people who have "performed exceptional services for France, or whose naturalisation would be of exceptional interest for France" can be granted citizenship, and that's exactly what Macron did. But that's not all. According to the BBC, Macron met with Gassama to thank him, give him a medal for courage, and offer him a role in the country's fire service.

This wonderful opportunity is changing the young man's life. Gassama reportedly was working to build a life in France, a dream of many African migrants who make their way there.

As Gassama receives praise, Macron is facing some backlash from French citizens embroiled in a fierce debate about the growing number of migrants in Europe. His steadfast support of Gassama is an important step for accepting African migrants into European culture.

Many migrants go through incredibly harsh experiences to get to Western countries, and many are just like Gassama — dreaming of a life of safety, freedom, and opportunity. While the young man's actions are heroic and deserving of the applause, we must remember that migrants — of all abilities and values — deserve respect and a fair chance at gaining citizenship.

Gassama's actions are an example of just how important it is to value all immigrant lives.

Gassama's actions show the heroic, uplifting, selfless possibilities of humanity when we put the needs of another before our own. When we recognize others, and even sometimes go through discomfort to help someone else, the possibilities are endless.