This guy’s disturbing group chat shows how easy it is for men to dismiss rape. 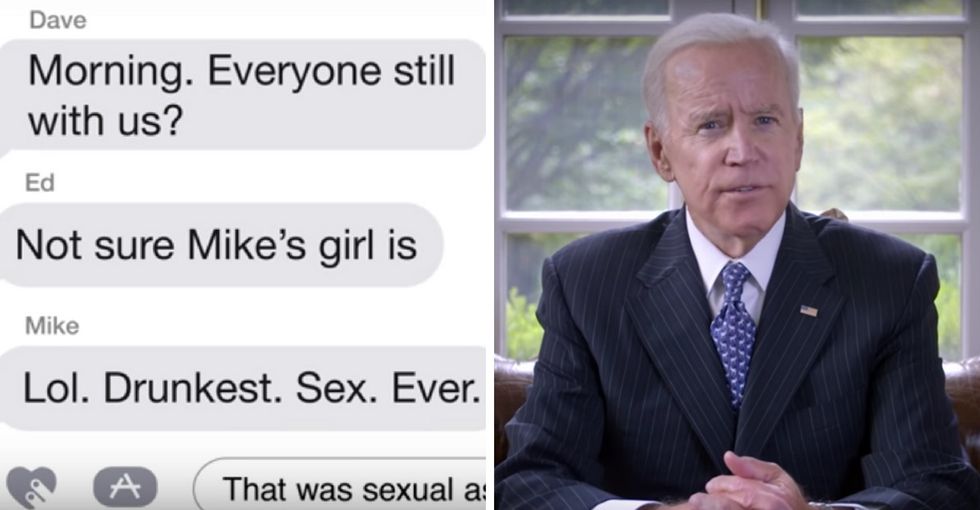 Four times, Brian typed out an honest response to send to his guy friends in their group text message. But he didn't share a single one of them. All four times, Brian — the fictional main character in a new PSA from the It's On Us campaign — caved before hitting send.

Brian's friends' convo began like many do after a night out drinking: reminiscing about what happened hours earlier.

"Morning," Dave began. "Everyone still with us?"

"Not sure Mike's girl is," Ed replied.


Brian decided to be frank. "Dude," he typed. "Hooking up with that girl was messed up." But then he thought twice, and deleted it. Instead, he typed out, "That was sexual assault or whatever."

He deleted that message too.

GIF via It's On Us/YouTube.

A pic was shared mocking one of the women Brian's friend slept with.

"Ugh," Brian wrote, increasingly frustrated. "You guys are part of the problem." Again, he decided against sending it. He sent nothing instead.

"Who even was that?" Ed replied a moment later.

"That's the girl you raped," Brian wrote candidly — before deleting it again.

GIF via It's On Us/YouTube.

After all that, Brian went with a grimacing face emoji. The group laughed off the emoji, and quickly moved on to breakfast plans — as if the rapes never even happened.

It's scary to think Brian's friends dismissed the fact that Ed and Mike had assaulted women the night before. It's even scarier to think how often a conversation like that actually happens.

Maybe Dave and Carl were sitting alone debating if they should say something about the assaults too, like Brian had been doing. But neither of them did. Through their choice to stay quiet, every bystander encouraged the behavior.

But, research shows friends actually can make a big difference when they speak up about sexual assault. In 2014, NPR reported that evidence suggests a man is more likely to commit acts of sexual violence when he has friends who dismiss (or even encourage) it. The opposite is also true.

Peer pressure — for better or worse — makes a big difference.

"One of the things that matters most to boys and emerging adult men is the opinion of other men," John Foubert, a researcher at Oklahoma State University, explained to NPR.

That's an important distinction between other botched, victim-blaming efforts to curb sexual violence and the It's On Us campaign.

As its name suggests, It's On Us focuses on men.

We shouldn't be telling women to avoid short skirts and liquor in order to not get raped. We should be telling men and boys not to be rapists.

"Guys, if you know someone who's had sex with a girl who didn't or couldn't consent, it's on you to confront him," former Vice President Joe Biden, a leading voice of the campaign, said in the PSA's closing. "Fear is no excuse. You can help put an end to sexual assault."

Watch the PSA by It's On Us below: