This bobsled team proves it's possible to overcome every obstacle in your way. 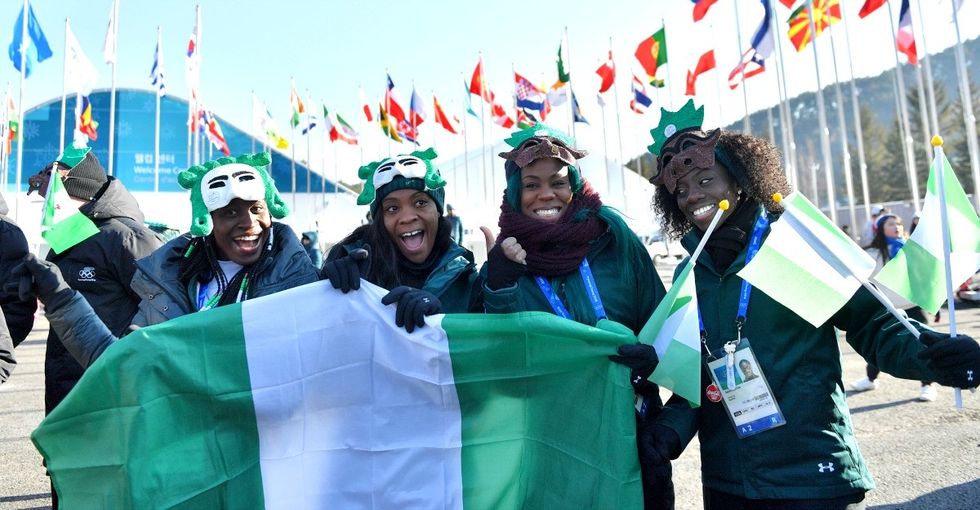 No African country has ever competed in the bobsled at the Olympics, but that's going to change at the 2018 Winter Games in Pyeongchang.

Three former track athletes from Nigeria are taking the Olympic stage in another sport altogether, one they began training for as a team only two years ago. Their road to Olympic glory will pit the athletes against more established teams from North America, Europe, and Asia — locales that all feature one element that Nigeria lacks: snow.

But the lack of winter conditions in their homeland is only one of many obstacles that the team has faced — and overcome — in just two years of existence. In their successful run-up to the Games, the team had very little external help in handling the logistics of creating and funding an Olympic team — they did it all by themselves.

They were intrigued but knew next to nothing about the sport. Omeoga later joked about the meeting, "She kidnapped us. That's the story."

But after listening to  Adigun's pitch, Omeoga and Onwumere agreed to join as the brake-women for the team's sled. A team suddenly intact, the meeting ended with a declaration from Adigun on behalf of the nascent squad:

"Today we have decided that we are going to qualify for the 2018 Winter Olympic Games," she said.

Adigun was the only member with any bobsled experience, having trained with the U.S. team just eight months after watching her first race in 2014.

But even though the others were new to the sport, their previous pedigrees served as a vital asset. Historically, track athletes have enjoyed success in the transition to bobsled teams, but they have done so under far better circumstances than the Nigerian team. The team was, quite literally, nothing more than an idea at that early point — lacking funding, knowledge, and even a cohesive strategy as to how they would qualify for the game in a scant two years' time. And they were also missing an actual bobsled.

But Adigun, in what would be one of many instances of resourcefulness, took the matter into her own hands, building a sled from a local hardware store's scraps. Adigun named the ramshackle sled "Maeflower," the variant spelling a tribute to her stepsister, nicknamed Maemae, who died in a car wreck in 2009.

But as  the qualification deadlines loomed, the team still didn't have any money.

That's why two months after the team's creation, Adigun established a GoFundMe campaign to raise the money to travel, train, and compete in a manner comparable to their rivals. Fortunately, the inspiring story of the team's inception and goal buoyed their campaign. The team succeeded in raising $75,000 from strangers, $50,000 of which came from a single anonymous donor.

In addition to their GoFundMe, the athletes sought out funds from friends and family to cover the balance of their training expenses. They "started from zero," according to Akuoma Omeoga.

With yet another issue solved — or at least "managed" — it was time for the team to begin racing.

Over the next 14 months, the Nigerian bobsled team began to coalesce by following races in Park City, Whistler, and Calgary. And after competing in five races, they qualified for the Olympics.

Can't wait to see these ladies in action #nigerianbobsledteam

Thanks to their ingenuity and perseverance, they have became the team to watch in Pyeongchang.

"We are this Cinderella story, and we didn't really mean it to be this," Adigun told The New York Times. "It comes with a lot more pressure, but I'm not thinking about it that way. I put a plan down, and I am ready to execute that plan."

That plan won't just serve the Nigerian bobsled team. Their approach is an inspiration for any subsequent Olympic hopefuls looking to blaze their nation's trail to the biggest sporting event in the world. To compete at an Olympic level, an emergent team must contend with far more than just the athletic aspect of competition, and those challenges often require out-of-the-box thinking, just like the Nigerian team has demonstrated countless times over.

The Nigerian bobsled team's saga proves to the world, especially aspirational children who may be watching a sport for the first time, that those obstacles, much like the athletic ones, can be overcome as long as a team keeps pushing forward to both plan and prepare for everything that comes its way.

A vertical garden is the gift that keeps on giving

Growing your own food has been a trend, but with the financial and social distancing challenges that 2020 has presented, it feels more relevant now than ever before. No matter how small your living space is, vertical gardening makes it possible to pick your fruits, vegetables and spices right off the vine without having to leave your house. Not only are you guaranteed the freshest possible food (with no pesticides), but the last time I checked that bag of carrots you bought at the grocery store doesn't grow more carrots. Vertical gardening brings convenience, aesthetics and sustainability to your home. And when some weisenheimer calls your dish out for not having fresh basil, you can pluck a few leaves off the basil plant on your "spice wall" and drop them on their plate like you just won a rap battle.

2020 has been a long year. So long, that it might have even been five years packed into one. Why not start the new year off right with a little self-care? If you want to turn 2021 into a 365-day spa day, nobody's going to blame you. These products on Amazon can help you ring in the new year with some R&R.

'Marriage: A Story of Love in 28 Parts' has long-time couples rolling

After torturing parents for more than two decades, Caillou has finally been canceled

The last living spouse of a Civil War veteran has died