This beautiful river helps her people survive. Now it's threatened by an oil pipeline.

A leader from a First Nations people in Canada talks of the threat of an oil pipeline. 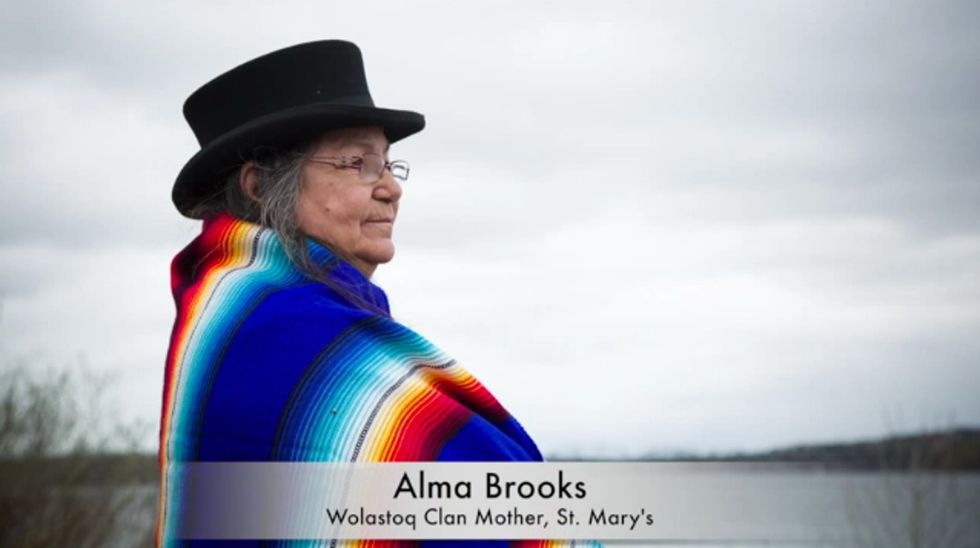 Alma Brooks is Wolastoqiyik, known as "the people of the beautiful river."

What her people call the Wolastoq but what is also known as the Saint John River runs from Maine into Canada's New Brunswick province. The Wolastoqiyik are a First Nations people with a long history in the area.

"We are the Wolastoq. The Wolastoq is us," she says. "We get our identity from there."

Photo of Alma Brooks by Robert van Waarden via this video from Ricochet.

The river could soon be threatened by spills from a proposed oil pipeline.

The Energy East pipeline, backed by the energy company TransCanada, would carry oil across Canada. The pipeline could also encroach on the traditional lands of the Wolastoqiyik.

Need a primer on where we're talking about? Here's a map of the Saint John River:

The course of the Saint John River, in dark blue. Image via Papayoung.

According to Alma, this land should still be protected by the Peace and Friendship Treaties, signed in the 1700s.

“Unlike later treaties signed in other parts of Canada, the Peace and Friendship Treaties did not involve First Nations surrendering rights to the lands and resources they had traditionally used and occupied.“
— Government of Canada website

The Wolastoqiyik are protective of their land because, as Alma says in an article by Ricochet:

"We have original treaties that were signed by our ancestors. ... Nowhere in those treaties have we ever surrendered or ceded our land."

These treaties specifically protect the resources of this land to be used as a source of their livelihood. If a pipe leaks, what will become of the river?

The solution Alma proposes is to build jobs that "sustain life and not destroy."

Hear her tell story in this video:

Keep that oil in the ground, and both the Wolastoq watershed and its people will be sustained.