This 9-yr-old who got a law banning snowball fights dropped is a real American hero. 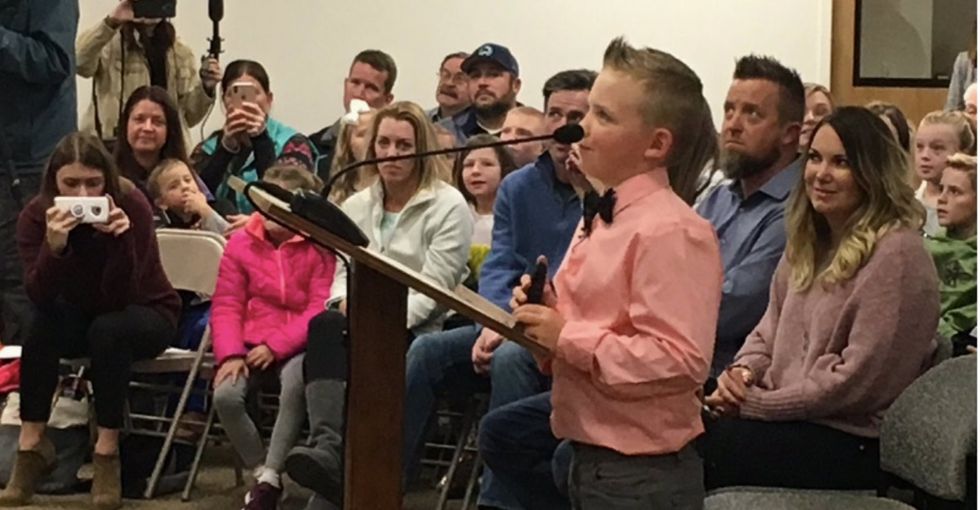 Dressed in a sharp pink dress shirt and black bowtie, Dane Best approached the microphone at the Severance, Colorado city council meeting. His goal: To convince the city to overturn a century-old ban on snowball fights.

The small town of Severance averages 43 inches of snow per year, but for the past 100 years, throwing snowballs within city limits has been illegal. Packed balls of snow fell under the town's definition of "missiles," and a town ordinance prohibited the throwing of stones or missiles at people, animals, buildings, trees, or other property.

Best found out about the law a month and a half ago and decided it was time for that law to change.

Best was encouraged by town officials to present his case to the city council.

Kyle Reitkirk, assistant to the Severance town administrator, and other town officials told Best that he should do the research and present it to the town council. So the 9-year-old put together a presentation.

Best and his classmates wrote letters encouraging officials to overturn the law. Then Best made his case in front of the council using logic and common sense.

"The children of Severance want the opportunity to have a snowball fight like the rest of the world," he told the lawmakers. "The law was created many years ago. Today's kids need a reason to play outside."

He articulated a list of reasons why the law is outdated, and even presented his arguments on a slide projector.

Rietkirk said before the meeting, “All of the kids always get blown away that it’s illegal to have snowball fights in Severance. So, what ends up happening is (town leaders) always encourage the kids with, ‘You have the power you can change the law.’ No one has.” Until now.

The town council meeting was filled with families eager to see Best's presentation. After hearing Best's arguments, the council unanimously voted to overturn the law. The kids of Severance can now throw snowballs at one another without breaking the law.

This is what civic engagement looks like. We should all take notes.

The best part of this story is seeing a kid not just learn about, but actually engage in, the process of getting laws changed—something that many adults don't take the time or energy to do. So many of us like to complain about outdated or unjust laws, but don't take the steps democracy offers to get them changed, whether it's at the local, state, or national level.

It's not always as simple as overturning a snowball ban, of course. But it's also not as complicated as we might believe. It's our right and duty as citizens to take our lawmakers to task when we want to see change, and there are many avenues for us to do that.

Thanks, Dane Best, for the awesome reminder of our civic duty. And good luck in your first legal snowball fight, kiddo!