This 11-year-old who loves to crochet has become a viral phenomenon. 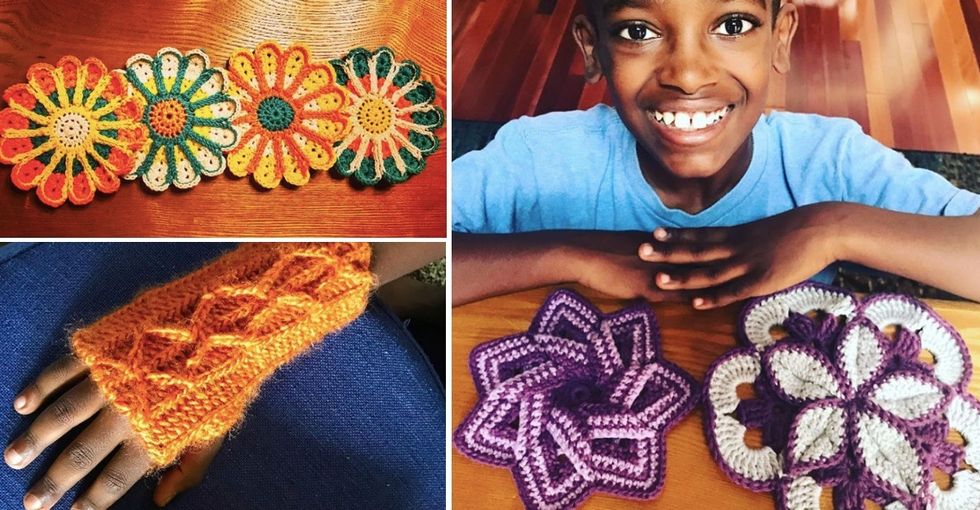 Jonah Larson found a crochet hook in a box of craft supplies when he was five. Six years later, he's a viral crocheting phenom.

The 11-year-old didn't set out to become a crocheting prodigy, but after he found a tutorial on YouTube at age five, he was (pardon the pun) hooked. Since then, he has created countless crochet projects, from scarves to blankets to mermaid "legs" to stuffed octopi, and is showing no signs of slowing down.

Jonah's mother, Jennifer Larson, says that Jonah's hobby comes completely from his own initiative, and he practices it between 4 and 5 hours a day.

“He’s much more fascinated to see what beautiful thing he can make from that string of yarn than playing a video game,” she told the Lacrosse Tribune.

Jonah seems to agree with that assessment. "After a very hard, busy, chaotic day in this busy world with school, he told NPR, "it's just nice to know that I can come home and crochet in my little corner of the house while sitting by the one I love most: my mom."

Jonah has his own Instagram and Etsy shop, where he shares and sells his one-of-a-kind creations.

With his mother's help on the business end of things, Jonah shares his creations on his Instagram account and sells them through his Etsy shop. However, due viral news coverage creating an over-demand of his creations, the shop has been temporarily closed.

As of January 15, Jonah's Instagram account, Jonah Hands, had less than 2500 followers. On February 6, it's up to 53,600 followers—and counting. (It has increased by 2000-plus people just in the time it's taken me to write this article.)

Jennifer has been sharing the news coverage on her Facebook page, where Jonah also adds updates about his projects. Check out the blanket he just whipped up on a snow day:

Hi 👋🏾 This is Jonah. Here’s what I did with my snow day yesterday. Too cold to go outside 🥶This blanket was made with my fingers using loop yarn.

Jonah sends some of his proceeds back to the orphanage in Ethiopia where he lived as an infant.

Jennifer says that Jonah is learning to manage money and make wise choices with his earnings. He sends some of his profits back to the orphanage in Ethiopia where he lived before he was adopted by the Larsons as an infant.

"He saves some money, he's investing some money and he donates as well," Jennifer told NPR. "So those are things I think are important in life for adults to do, and I'm glad that he can learn that at an early age."

Jonah told NPR that he wants to be a surgeon when he grows up. With the skills he already has as a kid, no doubt he'll have the dexterity and fine motor skills for the job as an adult.

To top it all off, Jonah is just an incredibly sweet kid. Watch this video of him crocheting away while telling us to focus on the good things in the world, and you'll see why he's captured the hearts of so many people.

A viral video from a Little League game has people celebrating good sportsmanship.

Youth sports have gotten more intensely competitive, to the point where overeager parents and coaches have to regularly be reminded to take it down a notch. So when humanity takes precedence over team rivalries, it's extra heartwarming.

And considering how many "kids these days" laments we see coming from older generations, it's also heartening to see kids showing excellent character qualities when no one directly asked them to.

A viral video from a Little League baseball game is giving us a nice dose of both—good sportsmanship and basic human kindness from two players from opposing teams.

Because not everything needs to be automated.

What a time to be alive. We have cars that drive themselves, stunning art created by artificial intelligence and my personal favorite—air fryers! It's a reality worthy of George Jetson, who may or may not have been born this very year, according to some Twitter theorists.

But still, even with these modern marvels, there are some experiences that need no improvement … even if they do take twice as long.

A Reddit user recently asked the online forum to share one thing they “still preferred to do the old-fashioned way, regardless of technology.”

Unsurprisingly, a main theme in people’s answers had to do with “old-fashioned” activities having a tangible quality to them. Activities that require touch, taste, smell … those things that make us feel human. Sure, efficiency and convenience are great, but feeling alive is pretty great too.

Here are 17 of the best answers that might have you going back to Team Analog:

"By the age of 30 you should have anxiety, and an emotional support pet that also has anxiety."

When Steve Adcock, an entrepreneur and “fitness buff” posted this to his Twitter:

“By age 30, you should have a group of friends that talk business, money, and fitness, not politics and pop culture.”

By age 30, you should have a group of friends that talk business, money, and fitness, not politics and pop culture.
— Steve · Millionaire Habits (@SteveOnSpeed) August 1, 2022

His post might have been intended as more of an encouragement to surround yourself with people who challenge your current mindset, considering the tweet continued with “one of the biggest mistakes I've ever made was making friends with like-minded folks who talked about the same [stuff] over and over. I agreed with 99% of it. Your comfort zone will kill your progress.”

But still, overall the tweet left an unsavory taste in people’s mouths—primarily because it implied that money was somehow a better conversation topic than what people are usually genuinely passionate about. Why not talk about your favorite television show with friends if it lights you up inside?

What is vasculitis? Ashton Kutcher shed some light on the rare disease after his diagnosis.