They wanted to be perfect parents. Their sons helped them realize there's no such thing. 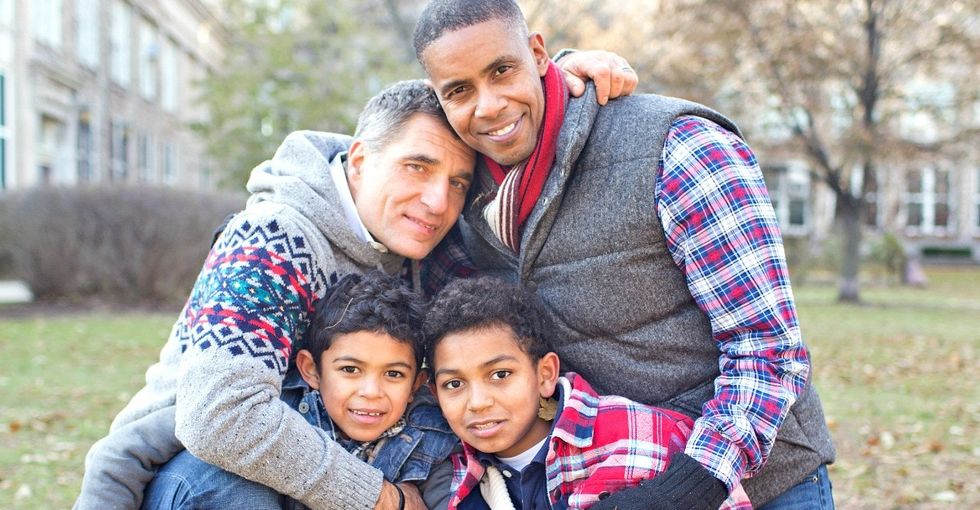 When Tremaine Maebry and Roland Locher decided to adopt, they tried to be as prepared as possible.

They read all the articles they could find on what to expect when adopting kids, took parenting classes, and Tremaine even reached out to writers of blogs like "Gays with Kids" to ask more questions.

So when they finally got their two sons, Jason and Jaelon, aged 7 and 9 respectively, the new dads felt truly ready to ace parenting.

However, they quickly learned that's pretty much impossible. There's no way to be fully prepared for all that comes with having kids.

"Nothing prepares you for the 'emotional component' of being a parent," writes Tremaine in an email. For example, he felt this instant, intrinsic need to protect them from the world's dangers.

Jason and Jaelon Maebry-Locher. All photos courtesy of Tremaine Maebry.

Tremaine was most concerned for his kids' well-being in a large, unpredictable city like Chicago.

In the beginning, he worried a lot about how two biracial (black/Hispanic) boys originally from rural Texas would handle such a lifestyle shift.

"Images and stories on TV of black and brown men and women being shot by police plagued me," explains Tremaine. "So my goal was to get them to respect and understand authority."

That was often easier said than done, considering that these boys were still learning what that means in the Maebry-Locher household.

So Tremaine assumed the role of disciplinarian — he's the one who sets and enforces the rules of their household. However, he always makes sure to talk them explicitly about why he's laying down the law when he does.

"Roland is the fun dad and I’m the mean one," writes Tremaine. "But I like that we have this balance."

That said, they're trying to be flexible with their parenting roles as the boys grow up.

But as any parent will tell you, it's not an exact science; all you can do is learn as you go.

Roland, Jason, and Jaelon on vacation in Costa Rica.

There may be some speed bumps along the way, but they're realizing having a family means approaching those issues together.

"We established an open dialog which encourages them to have an honest and open discussion of all things," explains Roland. "Though we may not like some of the things that we hear, if they come to us with anything, we will love them unconditionally. The important thing is to talk about things and take responsibility."

Sometimes the boys want to talk about their birth parents, and Tremaine and Roland always give them the space to do so. It can be hard, especially when they seem to want to ask why their parents left them, but Tremaine's trying to change their perspective.

"I might say, 'Your mommy loved you so much and wanted you to have a better life, one that she could not give you herself.'"

While it's occasionally about dealing with difficult things, family time is most often about sharing space, new experiences, and — above all — learning from each other.

That's why they have their nightly dinnertime ritual, which is "when we all check in on each other and find out what happened, what's going to happen, and what needs to happen," says Roland. "It's full of funny moments, teachable moments, emotional moments, and ebates."

And since the boys love to be active, they go on a lot of outdoor adventures.

They've also taken a lot of trips to visit family.

"Family is really important to us, and we want the boys to know all of their new extended family and be comfortable with them," writes Roland.

It was on one of those trips that Roland realized how attached their kids had grown to them. The boys were going off to spend time with his sister in Puerto Rico, and they were legitimately upset to leave their dads. It was both gut-wrenching and love-affirming all at the same time — ironically how many describe parenting in a nutshell.

Sometimes getting through the harder, complicated moments are the best reminders that you're doing all right as a parent.

The Maebry-Locher family knows they're not perfect, but Tremaine and Roland wouldn't want it any other way.

What's more, they want their kids to see their parents' flaws so that they know it's more than OK to have them and that working through them makes you stronger in the end.

Parenting, just like life, is a process, and each day comes with new challenges. These dads may not always get it right, but if they work together along the way, there's nothing they can't overcome.

Learn more about parents making their families great in their own, unique ways here:

Myth: There’s one perfect way to family. Truth: There’s a billion ways to family greatly. Share with the people you think #FamilyGreatly”

From Your Site Articles
Related Articles Around the Web
teachers
Nature