These nomadic people can see like dolphins and hold their breath twice as long as you.

When your entire culture lives on the water, you develop some cool abilities. 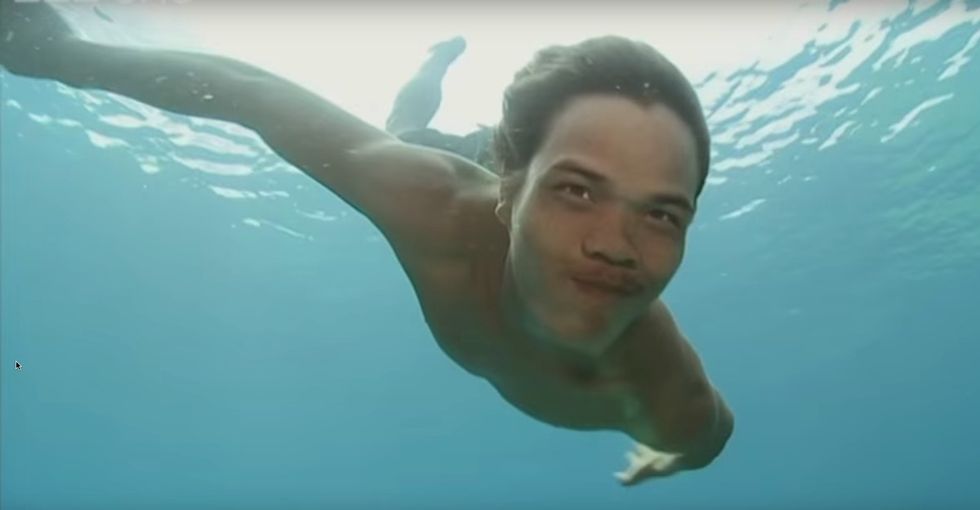 Every little kid has wanted to be a fish.

Or a dolphin. Or a shark. Or some sort of spectacular underwater creature, at least once.

We all did it. Glub-glub-glubbin' with our hand-gills underwater, only to end up disappointed when everything beneath the surface of the waves looked all blurry and weird and we were forced to come back up for air.

But in Southeast Asia, there are a few incredible kids who are closer than the rest of us to achieving these aquatic dreams.

The Moken people can be found spread around the archipelagos of the Andaman Sea off the western coast of Thailand. They're just one of several nomadic Southeast Asian cultures that are sometimes referred to by the problematic name of "sea gypsies."

There are estimated to be between 2,000 and 3,000 Moken although no official records exist. Their people are born on the sea, spend most of their lives on handmade wooden boats called kabangs, and go back out to the sea to die.

Moken children even learn how to swim before they walk so that they can help the rest of the tribe by diving for shellfish and eels and other underwater creatures they can eat or sell to survive. But they're only able to do this because of a special advantage: They can see clearly underwater and hold their breath for twice as long as the rest of us.

But it's not some rare Atlantean mutation; it's just another way of controlling their muscles.

A 1999 study from the University of Lund in Sweden aimed to uncover the secret of this uncanny skill. Was it evolution? Mutation? Or maybe just a simple body hack that the rest of us can learn from?

The lead researcher, Anna Gislén, integrated herself into the Moken community to study their habits and measure their sight. She discovered that the Moken children were able to see twice as well underwater as European children by simply shrinking their pupils to increase the depth of field and muscularly changing the shape of their eye lenses. It's the same way dolphins are able to see underwater. The Moken children could also willfully decrease their heart rates, allowing them to hold their breath for twice as long.

That means that, in theory, anyone can learn how to control their bodies to achieve these amazing underwater adaptations.

In a later stage of her research, Gislén brought a group of European children with her to Thailand — and after 11 sessions over the course of a month, their underwater eyesight improved as well.

“It was different for each child, but at some point their vision would just suddenly improve,” Gislén told the BBC. “I asked them whether they were doing anything different and they said, ‘No, I can just see better now’.”

That being said, the European children were more prone to red eye and other irritations after prolonged exposure to the saltwater with their newly adapted eyes. This suggests that the Moken children might have some unique evolutionary bonus after all.

Even more surprising is that adults appear to lose this special ability.

"When we age, our lenses become less flexible, so it makes sense that the adults lose the ability to accommodate underwater," Gislén said. This could explain why the adults tend to spear fish from their boats while the adaptable children dive down to the sea floor.

But now the Moken culture is in danger of disappearing, and their amazing aquatic abilities could die out with them.

Ever since the deadly tsunami that ravaged the Indian Ocean in 2004, it's been increasingly difficult for the Moken to compete with depleted resources and the encroaching modernization of seaside resorts. While the Thai government has tried to help the people recover from this natural disaster with housing and job training, their altruism has come at the cost of tradition — and, by extension, their incredible underwater abilities.

"You want to help keep people safe and give them the best parts of modern culture, but in doing so they lose their own culture," Gislén said. "They just don’t spend as much time in the sea anymore, so I doubt that any of the children that grow up these days in the tribe have this extraordinary vision."

"Moken are supposed to travel, to be nomadic, to travel freely. So if we cannot travel freely, we are dead, culturally at least," said Hong, a Moken community leader, in an interview with The Guardian. "Moken children use mobile phones, study English and choose to be educated. We've abandoned our old traditions so much we risk losing them entirely."

Here's a short video about the amazing Moken people. Because sometimes sharing an incredible story is the only way to keep a struggling culture alive.