These kids love yoga — but they call it 'Jackie Chan-ing,' and it's changing their lives. 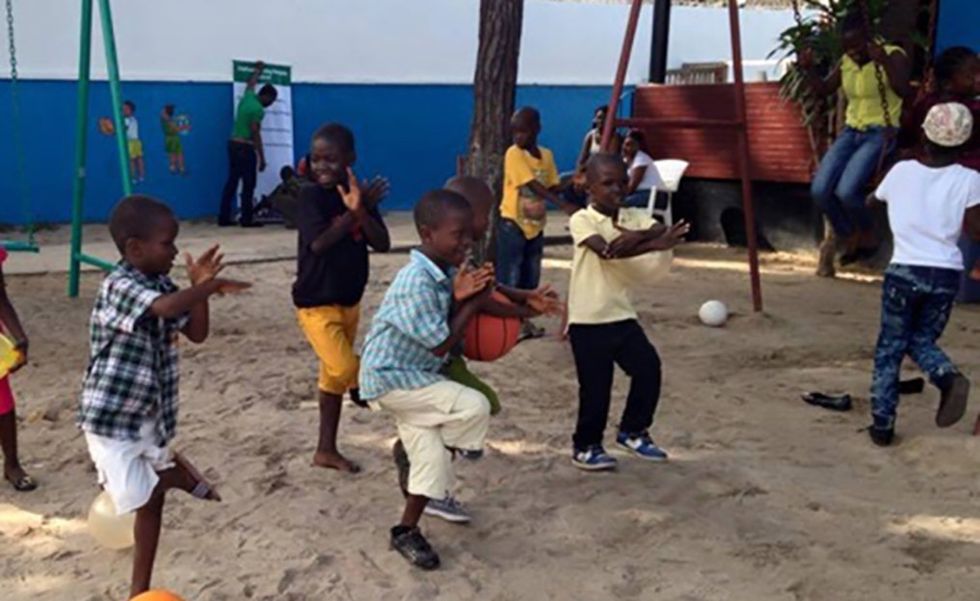 In Liberia, hundreds of kids are using Jackie Chan to heal after trauma.

You mean the famous martial artist and actor Jackie Chan?

The kids are actually using body movement classes to rebuild trust in their bodies — but they call it "Jackie Chan-ing."

Image courtesy of Playing to Live.

The classes are yoga therapy classes, Playing to Live founder and director Alexis Decosimo explained to me.

"All our programs go through a cultural adaptation process, so ['yoga' or] even 'relaxation' didn't really stick. It ended up being 'We're going to do Jackie Chan-ing.'" Understandably, the idea of learning to be like Jackie Chan is what got the kids most excited about yoga therapy exercises.

Playing to Live is an organization that uses art, play, and yoga therapies to help children from communities affected by Ebola to process what they've been through.

Thanks to a UNICEF grant and local partner RESH, the group is currently working with 900 kids and 40 female Ebola survivors across a few of the most affected Liberian communities.

Yoga therapy helps each kid rebuild a healthy relationship with their body and gently guides them out of trauma response mode.

When you think you might have Ebola, your body is scary — it can even become your enemy, Decosimo said. The reflexive response is to try to disconnect from your body. "But then you're not in control anymore. It goes much deeper than that."

Yoga — er, Jackie Chan-ing — forces the kids to focus on something other than trauma. It helps them relax, and it helps their body and brain realize they're not in the trauma anymore.

It also builds self-esteem and healthy body-mind relationships. The "Mountain Dance," for example (a favorite among the kids), is all about standing tall and proud, and being in control.

Kids in Liberia learning the mountain pose. Image courtesy of Playing to Live.

"Everything really is of course fun and playful, y'know, helps children be children," Decosimo added. "The twist that we have is that there is an evidence-based clinical aspect to it."

Decosimo says, “We want to build this culturally relevant program that can be extended globally." In fact, they've already started working with kids in South Africa on issues of homelessness.

"What art therapy can do, and play therapy can do," said Decosimo, "is help the child recreate their trauma ... [and] learn how to process it through creating images about it, playing it out, and having a safe place."

Well, I suppose it's official: Jackie Chan really can defeat any villain. Even the trauma of Ebola.