These infuriating stories of casual workplace racism are just the tip of the iceberg. 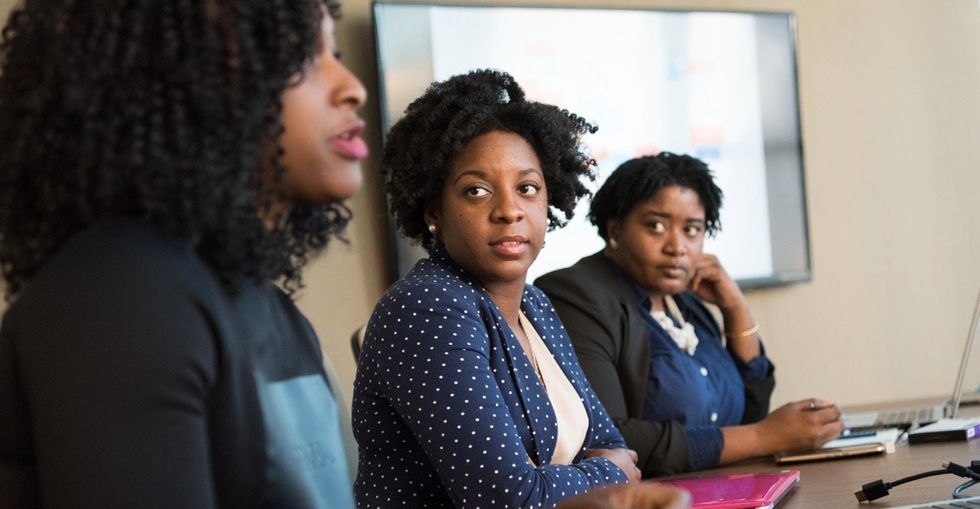 Instead of listening or responding to her points, Bill O'Reilly stopped in to "Fox and Friends" to make a racist joke about Rep. Maxine Waters' hair. Barely hours later, Sean Spicer told respected White House correspondent April Ryan not to shake her head during a press briefing.

It's infuriating. And as a black woman, I know men (and women) like O'Reilly and Spicer are not anomalies.

We are constantly told what to wear, how to style our hair, to soften our voices, and how to behave by people who have no right to make those decisions.

But it's never about the hair or the facial expressions. It's the need to control, denigrate, and dismiss black women.

If we don't fit into their idea of blackness or womanhood, then we're described as "difficult," "a poor fit," or the old standby "angry." That makes it a lot easier to fire us, keep us from getting promoted or paid fairly, or not hire us in the first place. Score one for white supremacy.

Time and time again, we've reminded the powers that be that we are not here for their bullshit.

What Waters and Ryan experienced was an all too common occurrence. Like many black women, educator and activist Brittany Packnett had had enough.

"I felt like, 'You are not going to come for these respected, important, committed black women,'" Packnett says. "I felt very much like they were coming for ... two family members and that there has been entirely enough of that."

She added, "I also was sort of simultaneously realizing that there would be ... the assumption that these were exceptional events. But black women know better."

So Packnett started the hashtag #BlackWomenAtWork and invited black women to share their experiences.

This happens to black women everyday at work. Share your Maxine and April moments, so people don't think this is rare. Use #BlackWomenAtWork
— Brittany Packnett (@Brittany Packnett)1490730450.0

1. It happens to doctors.

2. It happens to attorneys.

There was the time I ran into a judge in court in downtown LA and he assumed I was a defendant and not a lawyer. #BlackWomenAtWork
— Imani Gandy (@Imani Gandy)1490735948.0

3. It happens to professors.

Me: I'd like to check on the status of the books for this class. Staff: The faculty member does that. Me: I am faculty. #BlackWomenAtWork
— Nyasha Junior (@Nyasha Junior)1490739491.0

4. It happens in meetings.

5. It happens with co-workers.

6. It happens with managers.

6. It happens when you're just trying to get your work done.

News Director: When I first hired you Tyler I didn't expect you to be so verbose. Me: #BlackWomenAtWork https://t.co/c4Xox5wlsi
— GirlTyler (@GirlTyler)1490732350.0

7. It happens when you're auditioning.

Me: hey I really loved this script..is that role open? Them: Oh, we aren't will to "go ethnic" on that role #BlackWomenAtWork in Hollywood
— jurnee smollett (@jurnee smollett)1490745658.0

8. It happens when you're interviewing.

9. It happens to women who are in too vulnerable a position to do anything about it.

LRT. Most #BlackWomenAtWork can't even participate in the hashtag because they need to keep their job.
— Jasmyn Lawson (@Jasmyn Lawson)1490784580.0

10. It happens everyday, and it is exhausting.

11. It happens every day, and it feels awful.

But in struggle, there is solidarity. There is resilience. There is hope.

Maxine Waters, the legislator who inspired the hashtag, even got in on the social media groundswell. She also had an inspiring call to action on "All In With Chris Hayes" last night.

After the hashtag's overnight virality, many black women returned to Twitter this morning renewed, energized, and more determined than ever to confront this daily injustice.

12. Because black women won't be defeated.

This morning I put on a dress and heels, fluffed out my braids and went to teach Nursing Leadership . I am a black woman!!!#BlackWomenAtWork
— Hisrobin (@Hisrobin)1490797701.0

14. And will never stop grinding, pushing, and working...

For Packnett and many others involved in activism and resistance work, this hashtag is just the beginning.

All of us have a responsibility to create inclusive work environments where everyone, particularly women and femmes of color, have a chance to succeed. Reading and listening to the stories black women shared last night is a great starting point.