These incredible creatures are made of lights but will have a very real impact.

Life on Earth sure is spectacular. 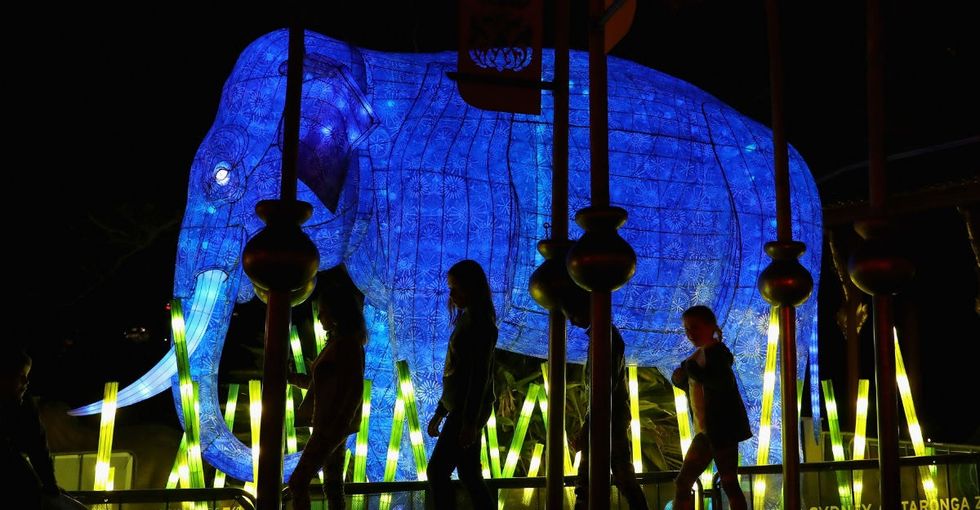 If you're strolling through Taronga Zoo in Sydney in the near future, you may get some otherworldly vibes.

The surreal sights and lights, however, aren't meant to pull your head away from Earth — they're there to show you just how precious this planet really is.

Every year, light installations, musical performances, and creative forums take over Australia's largest city in a massive weeks-long event called Vivid Sydney. And this year, Taronga Zoo is getting in on the action.

The zoo created 10 amazing animal light sculptures representing critical species that Taronga is committed to protecting. Here's a look at the spectacular designs:

1. As big and blue as the sky, the Asian elephant is an obvious must-see.

The real elephants at the Taronga Zoo are part of crucial global efforts to keep this species — which is endangered in the wild — from going extinct. There are as few as 35,000 left in the wild today.

These delightful creatures, which snack on things like fruit and shrubs, are extremely hard to spot. Experts believe no more than 400 Sumatran rhinos are alive today, making the species one of the rarest large mammals in the world.

3. The marine turtles at Taronga don't need water — they've got plenty of air to swim through.

Marine turtles have called the oceans home for over 100 million years. So it makes sense that Australia is fighting hard to keep them around another 100 million. Many species of marine turtles are classified as either vulnerable or endangered Down Under, which grants them special protections from threats, like hunting.

Although freshwater and saltwater crocs in Australia are pretty much terrifying on all accounts, their existence is vital to keeping entire ecosystems in check. That's why it's been illegal to hunt or harm them in Australia since 1972.

5. The pangolin sculpture is rad but certainly not built to scale.

Real pangolins are very small, very scaly, and — for some species — quickly being eaten into extinction. Although it's largely illegal to hunt and trade pangolin for their meat or scales, conservationists are facing an uphill battle in keeping these little guys out of unsafe hands around the world.

6. With its bold stripes and small stature — er, small for a wild cat, that is — the Sumatran tiger is in dire need of our help.

Sumatran tigers — the smallest surviving tiger subspecies in the world — are prime victims of deforestation and poaching. Their numbers have dropped significantly in recent decades, with as few as 400 alive today.

7. Lemurs are holding on tight to every last branch they have left.

Lemurs don't have much in common with the Sumatran tiger, but being a victim to deforestation is a big one. The furry creatures, native to Madagascar, have faced steep population declines due in large part to forest burning that creates more pastures for livestock.

8. Corroboree frogs are hoping humans can save the day.

Although they're among Australia's most iconic (and toxic) amphibians, the southern corroboree frog is critically endangered. Who's to blame? In large part, a widespread fungus that prevents them from breathing through their skin. So the Taronga Zoo teamed up with Australia's Department of the Environment to launch a breeding program to make sure this species doesn't disappear forever.

9. It doesn't get more peak Australia than the platypus.

Splashing around in eastern Australia and Tasmania, the platypus has garnered the attention of folks wanting to make sure these uniquely adorable creatures stay around for as long as possible. Evidence suggests overfishing and dried-up rivers could be affecting platypus numbers, so activists are keeping watch.

10. If you're keeping your eyes on the skies to spot a regent honeyeater, you may be waiting awhile.

These gorgeous yellow and black birds used to be seen in flocks of hundreds, according to the Australian government. But gone are the good old days. Their dwindling habitats in the Victoria and New South Wales forests have been a key concern for advocates rooting for these honeyeaters to stick around.

The zoo also included several other sculptures to complement the critical species — "a supporting cast of creatures," so to speak — to celebrate as well.

11. Echidnas are strange and wouldn't have it any other way.

Let's face it: Echidnas are the perfect kind of weird. These funky, spiny anteaters are extremely rare and one of only two mammals that lay eggs (the other is the platypus!).

12. If you're going to create bright light sculptures of animals, it'd be an injustice to overlook chameleons.

These wacky lizards — which come in various shapes and changing hues — have long, sticky tongues and eyes that move independently from each other.

There are around 3,000 species of these paper-clip-sized, buzzing, clicking creatures. Amazingly, certain species have been known to disappear entirely for years, only to return back in full force (like, no big deal — nothing to see here).

Eesh. These Australian natives are creepy, crawly, eerily fast on their feet, and definitely deadly. (I'll wait as you glance around the room to make sure none are hiding nearby...)

Regardless of whether they're the real deal or a bundle of bright lights, the animals serve as a great reminder that all life here on Earth is definitely worth protecting.