These girls are making the case for a more diverse set of emojis.

Some say emojis promote gender stereotypes. A new update looks to fix that. 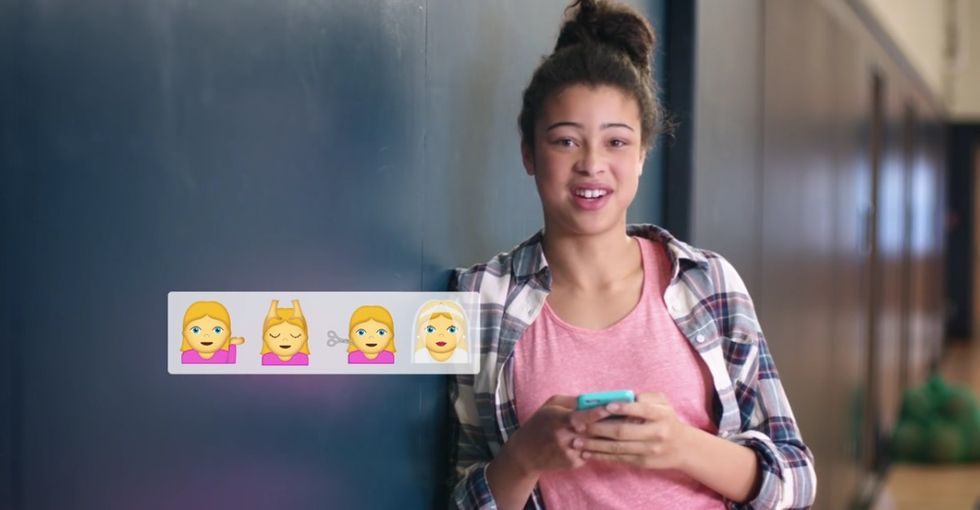 Women and girls send more than a billion emojis every single day.

Not familiar with emojis? They're those little cartoon images you might share via text or social media to convey, as their name would suggest, an emotion. Here are a few examples:

While new emojis are being added all the time, there's one little problem with the ones we already have: They're pretty stereotypical when it comes to gender roles.

The girl emojis have a tendency to be very ... pink. There's an emoji of a woman getting her hair cut, a bride, two women dancing in bunny costumes, a princess, and a woman dancing on her own — you get the idea.

On the other hand, men and boys have many emoji options: athletes, business professionals, police officers, firefighters, and even detectives.

A study by the American Association of University Women found that between grade school and high school, girls' confidence in themselves drops by nearly half. While boys also become less confident over time, the drop is much smaller.

That drop in self-esteem also affected girls in other ways. For example, girls were found to be only half as likely to stand up for themselves and far less likely than boys to believe they're "good at a lot of things." The reduced self-esteem correlated to a decreased interest in math and science.

But this problem has existed for decades, so what does it have to do with emojis? It's more a question of how emojis can help with this existing problem.

In a survey done by Always, two-thirds of girls reported feeling like emojis imply they're limited in what they can do because they're girls.

More than half of girls surveyed felt the emojis were stereotypical, and three-quarters said they'd like to see a more diverse set of emojis that aren't just doing stereotypically feminine activities, like getting manicures or having their hair cut.

Reinforcing an idea that girls are limited to certain roles in life only weakens teens' already vulnerable state of self-esteem. On the other hand, if they were explicitly given the message that they can be and do whatever they want in life, that could have a big impact in a positive way.

That's why Always started responding to emoji requests on their Twitter profile.

While you won't be able to use these emojis in text messages, it's still kind of cool to see these quick artist renderings of what more gender-diverse emojis might look like.

And here's something even better: Late last month, a new, gender-diverse set of emojis were submitted to Unicode, the group that decides which ones end up on your phone.

In an interview with Time, Mark Davis, the co-founder and president of Unicode Consortium, discussed the rise of the emoji (an emoji was Oxford Dictionaries 2015 Word of the Year), but also touched on some of the specifics of the latest, more gender-diverse draft of the emoji set.

According to Davis, the new set "will allow vendors to be able to support a male runner, a female runner, and if they want to, a neutral runner of no specific gender." In other words, it'll let you swap the gender of existing emoji options.

Whether or not this is a big deal in your life personally, for a lot of people, this could be a major win.

Watch the Always #LikeAGirl video below.