These 11 brave nurses remind us why we celebrate National Nurses Week. 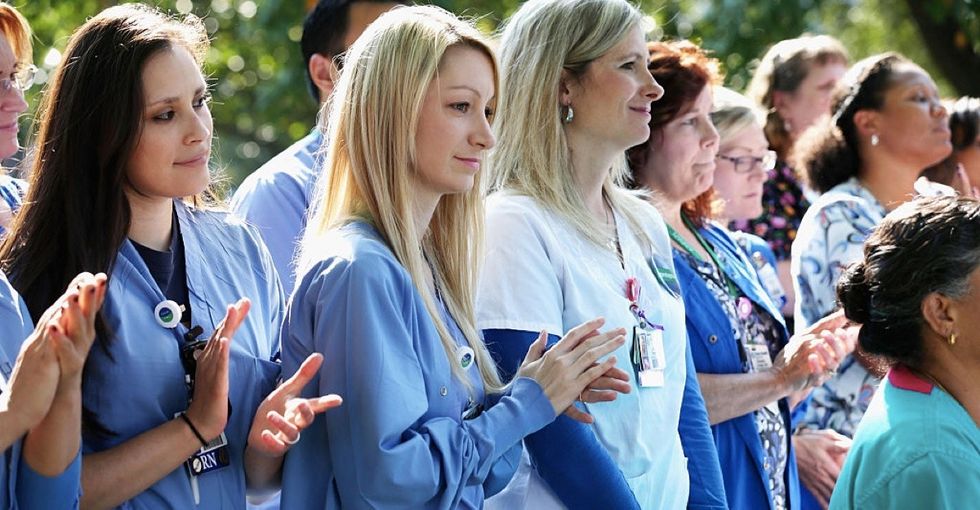 Nurses don't get nearly enough credit for their awesomeness.

Sure, doctors stand above them in the hierarchy of medical work (and I guess they're OK too), but nurses are the ones out there on the front lines, the unsung heroes who do the dirty work without expectation of reward.

They're the ones who take care of us — by checking in at the start of the appointment or drawing blood then gently patching us up or encouraging us to drink down delicious apple juice (or whatever other weird but necessary hospital foods). They watch over us at school when we scrape our knees on the playground or fake a headache just to skip gym class.

And, more often than not, they're the ones who are called into action during times of crisis, like superheroes who just can't hang up their capes.

So in celebration of National Nurses Week, here are 11 extraordinary nurses who went above and beyond the call of duty.

1. In Flint, Michigan, nurses are volunteering their time to give aid to people suffering from the contaminated water.

Veronica Robinson is just one of the many Flint-area nurses and student nurses who have selflessly sacrificed their time to draw and test children's blood and to educate parents on lead contamination, water treatment, and other preventative measures.

2. A retired New York nurse saved a man who had a heart attack on a Midtown street.

Claire O'Neill was 69 years old when she saw William Taylor collapse on 9th Avenue. She performed heart compressions until paramedics could arrive. Her act formed an eternal bond between the two as they entered their autumn ages — she even checked on him a few days later at the hospital.

3. On her ride home from work, a Boston nurse saved a bus driver who was having a seizure.

Sarah Demers first noticed the bus was shaking … and then that it was drifting toward a pole. She rushed to the front where she found the driver in the middle of a seizure. Fortunately, she was able to step in and hit the brakes in time before getting the driver to a nearby hospital.

Boston Medical Center, where Demers had been working. Photo by Cmcnicoll/Wikimedia Commons.

4. Another nurse was enjoying a game of sudoku some 30,000 feet in the air when she was called to the aid of the pilot flying the plane.

Linda Alweiss was flying home to California from Iowa when the flight attendants made an announcement in search of a medical professional. When Alweiss offered her services, she didn't expect to be reviving a pilot in the middle of a heart attack. (Fortunately, the co-pilot knew how to keep the thing in the air.)

5. While vacationing in Thailand, a German cyclist collapsed on the side of the road until an off-duty nurse passed by in her car.

Several other cars had allegedly passed by, but none had noticed the man waving for help. Fortunately, Srikanya Cheuarop had been out on a trip with her family and was able to provide first aid until an ambulance could arrive.

6. A nursing student was enjoying a night out at the theater when he ended up reviving a woman in the front row.

No sooner had Kristian Keyte settled into his seat at the Bristol Hippodrome to see the musical "The Bodyguard" than he noticed the distressed look on the woman's face in front of him. As it turned out, the woman's mother had suddenly stopping breathing. Keyte performed CPR and helped revive her until the medics arrived to take her to the hospital.

7. A travel nurse in San Diego ended up delivering a baby in the absence of a doctor … for someone who just so happened to work for her company.

Russ Waehler's wife went into labor a week before expected, but fortunately both of their concerns were calmed by a friendly travel nurse named Kim in the waiting room — who coincidentally worked for the same company as Waehler. When things progressed quickly and the doctor was unable to make it to the delivery room in time, Kim stepped up and handled the work in their stead.

8. A nurse in London was interrupted in the middle of a relaxing pint at the pub when a stabbing victim stumbled through the doors.

The stabbing appeared to be unconnected to the pub itself, but that didn't stop Louise Williams from taking control of the situation. She ordered the bartender to fetch a bath towel, and urged another drinker to phone an ambulance as she tended to the bleeding — ultimately saving the man's life.

The pub where it happened. Photo by Ewan Munro/Flickr.

9. A London nurse assisted an elderly man — who himself had stepped in to help her just minutes before.

65-year-old Stephen Breed intervened when he saw nurse Polly Collins arguing with another man on the train. But when he disembarked at the next station, he collapsed in cardiac arrest ... and Collins took the chance to return the favor while the station attendants called the hospital.

Stephen, left, during his stay in the hospital, and Polly, right. Image via NNM News/YouTube.

10. A Michigan police officer who was training to become a nurse had an unexpected opportunity to employ both sets of skills at once.

Highland Park police officer Mitch Heaney was called to investigate a knife attack near a drug clinic and quickly realized the victim was going to die if he didn't act fast. Heaney used the nursing skills he'd been taught to stop the bleeding.

11. During an Australian heat wave, an off-duty nurse rescued a 4-year-old child from a hot car.

Nurse Jess Hawkins had just finished her shift at Mt. Druitt Hospital in a Sydney suburb when she noticed the child in the parking lot with no shade for protection. She immediately alerted the hospital staff, and police arrived shortly after to smash the car windows and rescue the child from the heat.

To these and all the other brilliant, selfless nurses in the world, we just want to say: Thank you.

And in case you're somehow still not feeling inspired, maybe this'll do the trick: