The wonderful reason this woman is selling bags made from retired theater backdrops.

Turns out plays can create more than one type of art. 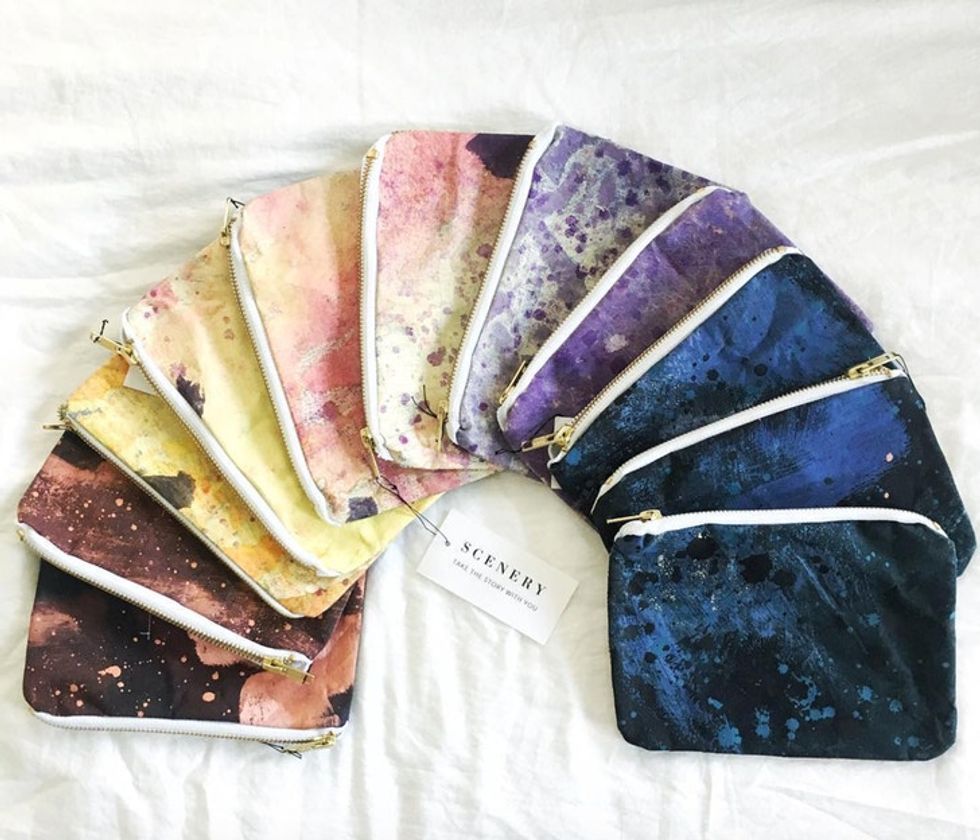 What happens to those massive gorgeous painted theater backdrops when a show ends?

Jen Kahn who has been a stage manager on and off Broadway for years, never gave a second thought to what happened to the stage scenery when a show ended until a road trip in 2015. She and her friend wandered into a store selling bags made from old sails from sailboats when inspiration struck.

They could do the same thing with discarded theater backdrops.

The gorgeous backdrop from this production is one of the backdrops Scenery Bags used. All photos via Jen Kahn unless otherwise noted.

Kahn collects discarded backdrops from theaters and set rental companies who would've thrown them away.

Jen Kahn in her car laden with backdrops.

The massive backdrops are then cut up and stitched into simple, super cute, rectangular clutches.

Bags are made at a factory in Florida.

Depending on which part of the backdrop they're cut from, the bags come in entirely unique patterns and colors.

Each bag also comes with a label inside identifying which show it came from.

There's a label inside each bag.

Kahn didn't just want to repurpose backdrops, though. She wanted to help make theater more accessible to everyone.

A portion of proceeds from the bags goes to the Theater Development Fund's Stage Door program, which takes middle school and high school kids to see Broadway shows.

Kahn credits much of the company's early success to the support she's received from the theater community.

“We have been given such an amazing opportunity to create less waste, keep a part of theatre history forever, and introduce a new generation of story tellers to theatre,” Kahn writes in an email.

These @scenerybags are made from retired theatre backdrops and a portion of the profits go to taking kids to see theatre!

Bloom found out about Scenery Bags through actress Krysta Rodriguez on Instagram. Rodriguez and Kahn became friends when they both worked on the Deaf West Revival of "Spring Awakening." Rodriguez was a supporter of Kahn's bags from the beginning and was one of the first people to get one.

When Bloom saw Rodriguez post about them, she immediately reached out to reserve her own, and when she received it, posted an unprompted photo on Instagram. Within 24 hours, Scenery Bags' followers jumped up by 1,400.

The next batch of bags are coming soon, from well-known musicals like "Hairspray," and "Oklahoma!" and from the looks of these backdrops, they'll be super cool.

“We may be giving [kids] an introduction to theatre, but I strongly believe they will be giving us back so much more,” Kahn writes.

Arts programs in America are endangered. These bags aren't just cute; they're a reminder of theater's significance and will help ensure kids still have opportunities to see live shows.

If arts programs are cut from schools, a generation of kids won't be encouraged to express themselves creatively, and the art world will suffer as a result. Kahn's contribution is just one theater-lover's attempt to turn that around.