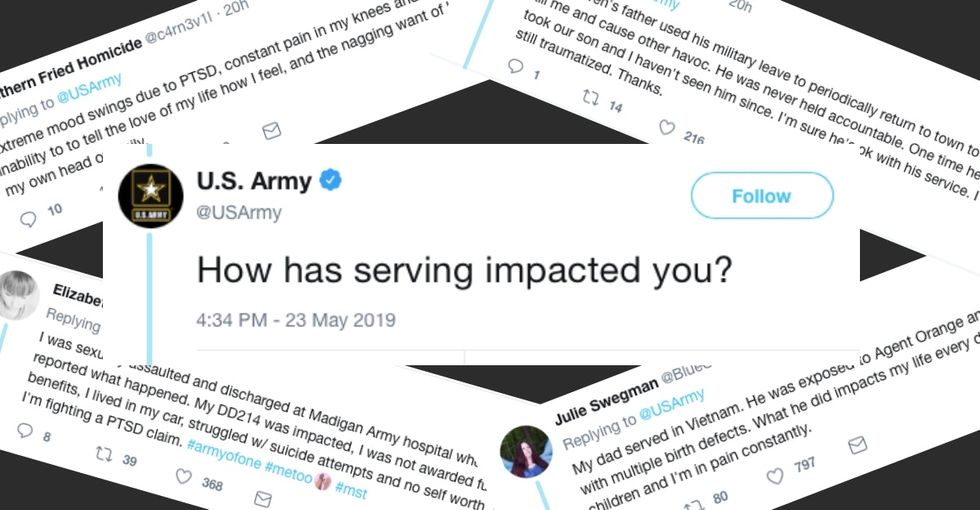 A simple question from the U.S. Army's Twitter account resulted in a flood of responses they probably weren't expecting.

Leading up to Memorial Day, the U.S. Army shared a video on their Twitter account showing a soldier's words about what serving in the military has meant to him.

The young scout, Pfc. Nathan Spencer, says he joined to serve something greater than himself.

"The army has afforded me the opportunity to do just that. To give to others, to protect the ones I love, and to better myself as a man and a warrior."

Then they asked Twitter the question, "How has serving impacted you?"

Presumably, the U.S. Army was anticipating more positive responses like Private Spencer's. What they got was a dose of painful reality.

Story after story of trauma, PTSD, abuse, loss, and other tragic outcomes came pouring in.

Americans have a tendency to place the bravery, valor, and duty of military personnel on a pedestal and gloss over the human cost of continually churning out trained soldiers. While our patriotic hearts swell at the sight of young men and women in uniform, there are dark sides to service that we barely talk about. "Thank you for your service," we say to our military folk, not realizing that the unspoken response is often, "It's destroying me."

These responses to the army's question speak to that reality:

@USArmy I was sexually assaulted and discharged at Madigan Army hospital when I reported what happened. My DD214 wa… https://t.co/asrGzi3lx2
— Elizabeth Grey (@Elizabeth Grey) 1558998319.0

@USArmy I was sexually assaulted, fought it in court martial and lost. He knows what he did and got away free. The… https://t.co/dpzTyNMlui
— Karly Kathleen😘 (@Karly Kathleen😘) 1559046098.0

It's not only the individuals who serve who are impacted. Their loved ones are too.

@USArmy My children's father used his military leave to periodically return to town to try to kill me and cause oth… https://t.co/CGfF5k092K
— Sista Self-care (@Sista Self-care) 1558999418.0

@USArmy My friend from high school joined the Army. Went on deployment and lost his best friend there. Came back wi… https://t.co/GhxajMWGc4
— Alejandro (@Alejandro) 1558983392.0

The responses were an important reminder that military service should not be glorified or prettied up for patriotism's sake.

These are not rare, isolated incidents. The tweets included here barely scratch the surface of the stories that were shared.

Too many soldiers who see combat come home irreparably broken, or don't come home at all. Too many families are destroyed by the trauma that people programmed to be killing machines bring back with them from the battlefield. We need to remember that the impact of armed conflict lasts far beyond surrenders and ceasefires.

But as many of these Twitter responses show, it's not just the soldiers who see combat who struggle with the impact of their service. Even those who are never deployed can also experience trauma in the ranks.

And far too many do not end up getting the emotional, psychological, or financial services they need to live their lives after the fact.

The U.S. Army acknowledged the stories people shared and offered the Veterans Crisis Line for those who need help.

Perhaps best way to honor soldiers is to strive to build a world that doesn't need them.

For every grain of sand on all the world’s beaches, for every star in the known universe…there is a piece of well-intentioned but possibly stress-inducing parenting advice.

Whether it’s the astounding number of hidden dangers that parents might be unwittingly exposing their child to, or the myriad ways they might be missing on maximizing every moment of interaction, the internet is teeming with so much information that it can be impossible for parents to feel like they’re doing enough to protect and nurture their kids.

Keep ReadingShow less
massachusetts man
Get stories worth sharing delivered to your inbox
By signing up you agree to Upworthy's privacy policy.
Trending Stories
relationships
Internet