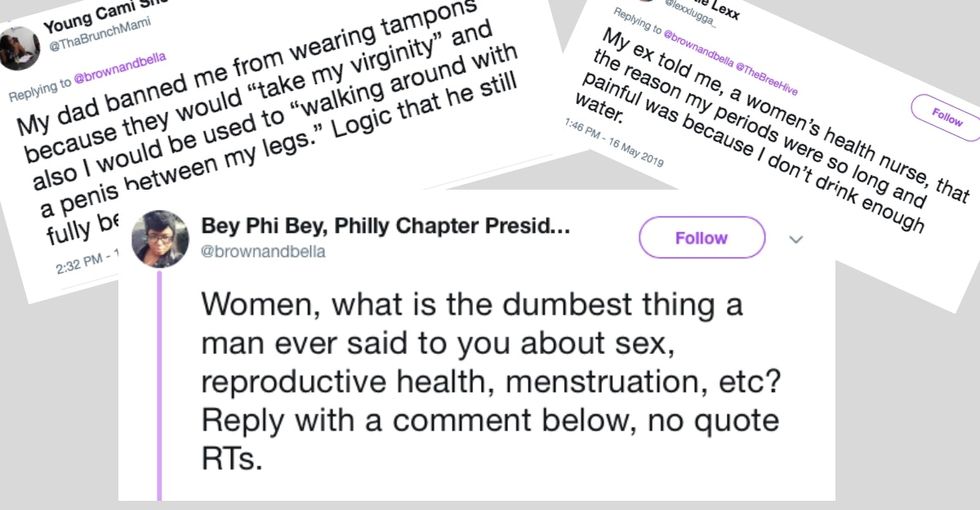 Not all men are woefully ignorant about how female bodies work, but far too many are. It's not necessarily their fault—our sex education programs definitely need a rehaul—but there's a basic level of biology that needs to be understood before you open your mouth about women's healthcare. Or about women's bodies at all.

When men outnumber women by vast margins in state legislatures—85% to 15% in Alabama, for example—there's a problem, especially when said legislatures are making laws about female bodies. Especially especially when we've had actual male legislators actually say things like "If it’s a legitimate rape, the female body has ways to try to shut that whole thing down." (Todd Akin, MO-R)

If you're thinking this take on men's knowledge is a little harsh, check out the stories in this Twitter thread.

Twitter user @brownandbella asked women to share the dumbest thing a man has ever said to them about sex, reproductive health, menstruation, etc., and female Twitter did not disappoint.

The responses will make you laugh, scratch your head, and perhaps throw some things at your screen.

Like this guy who told his female partner—who also happened to be a women's health nurse—that her periods would be less painful if she just drank more water.

@brownandbella @TheBreeHive My ex told me, a women’s health nurse, that the reason my periods were so long and pain… https://t.co/ExKBX1ddRu
— Auntie Lexx (@Auntie Lexx) 1558039578.0

Or this guy who thinks women wouldn't have periods at all if they just gave up meat.

Periods really baffle the dudes—though some of them seem to not realize that they're baffled. Like this guy who decided he should resign sanitary pads in a way that makes no sense whatsoever.

There were several examples of men not understanding that the vagina and the urethra are two completely separate openings.

@brownandbella @ReignOfApril A coworker genuinely thought women did all of our business, including birth, out of 1… https://t.co/rqQErRt9wW
— Varah T (@Varah T) 1558041141.0

And that women can't hold their menstrual blood in like they can urine.

@lupespace @verucakurst @brownandbella He's not the only one. There was a guy that objected to the idea that tampon… https://t.co/lLe4amDrVw
— Hollie Kirby (@Hollie Kirby) 1558087683.0

Then there's the "Don't wear a tampon because you'll get used to a penis being in there" dad. Umm, ewkay.

@brownandbella My dad banned me from wearing tampons because they would “take my virginity” and also I would be use… https://t.co/v8EKSFnuho
— Juicy Smuyay (@Juicy Smuyay) 1558042322.0

And the guy who thought women needed to clean themselves with soap every time they went to the bathroom.

@brownandbella A guy argued me down that proper vagina care was to wipe it down with soapy water, washcloth after u… https://t.co/EC4REjkDRp
— Chevron Summers (@Chevron Summers) 1558037885.0

(For the record, fellas, the vagina is a self-cleaning organ and too much soap can actually throw pH out of whack, causing all kinds of problems.)

And these statements about rape? I mean, dang.

@brownandbella Pre-med guy thought that since trauma-related vaginismus is a real thing that any woman raped whose… https://t.co/M6dReGmpz2
— Erin Griggs (@Erin Griggs) 1558048327.0

Overall, there are a whole bunch of general misconceptions about the entirety of female development.

@My_Beloved_One @brownandbella Retired Science teacher here. You would be surprised at the # of men (and women) who… https://t.co/C4WTaO6cWx
— old school teacher (@old school teacher) 1558042968.0

@brownandbella In sophomore year health class, after the teacher reads aloud the sidebar on ovulation: Him: “I do… https://t.co/lMUcUwgpIZ
— Genève (@Genève) 1558043769.0

@brownandbella I dated a 21 year old who did not realize that menstruation involved bleeding. He asked me how girls… https://t.co/jJcqcpZeuH
— Victoria Marini (@Victoria Marini) 1558046531.0

And this retractable umbilical cord visual is just too dang funny.

@psychomama @brownandbella @ReignOfApril It’s like a retractable vacuum cord, just give it a little yank and it spools back up!
— danielle (@danielle) 1558042680.0

Some men stepped in to apologize on behalf of their brethren.

Aye, there's the rub. All of this silly ignorance would be laughable if there weren't men who believe these kinds of misconceptions sitting in legislative chambers deciding what health choices women can and cannot make.

Yes, I know. There arewomen who believe this stuff, too. Just not nearly as many, since hopefully most women are fairly well acquainted with how their own bodies work.

Now we just need to get more of them at the legislative table.