The president's response to the Philadelphia Eagles isn't just petty — it's dangerous. 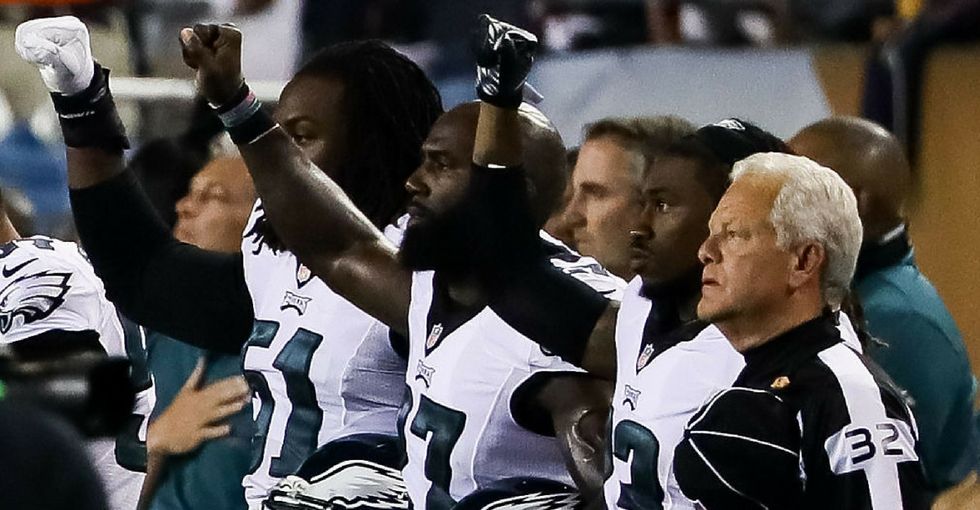 Responses to NFL protests during the national anthem have divided the nation and resulted in a dangerous reality for democracy.

The debate over kneeling during the national anthem to protest police brutality and racial injustice in the U.S. seems to have reached a new milestone, with the Philadelphia Eagles having their invitation to the White House revoked by Donald Trump.

Per tradition, the Super-Bowl-winning team was invited to meet with Trump, but much of the team backed out. In response, Trump issued this official statement on June 4, the day before the event:

"The Philadelphia Eagles are unable to come to the White House with their full team to be celebrated tomorrow. They disagree with their President because he insists that they proudly stand for the National Anthem, hand on heart, in honor of the great men and women of our military and the people of our country. The Eagles wanted to send a smaller delegation, but the 1,000 fans planning to attend the event deserve better. These fans are still invited to the White House to be part of a different type of ceremony — one that will honor our great country, pay tribute to the heroes who fight to protect it, and loudly and proudly play the National Anthem. I will be there at 3:00 p.m. with the United States Marine Band and the United States Army Chorus to celebrate America."

Donald Trump issues a statement saying neither the #Eagles, nor team representatives, are welcome at the White Hous… https://t.co/ehTgRNWf0m
— Ian Rapoport (@Ian Rapoport)1528153742.0

One might even use the word "fascist" — and that's not a term I toss around lightly. Fascism has some fuzzy definitions, but forced nationalism is a hallmark of all of them. A leader of a country attempting to coerce citizens to perform specific displays of patriotism is an undeniably fascist move.

Trump isn't punishing his detractors — he's punishing those who simply associate with those who disagree with him.

None of the Eagles players knelt during the anthem last season, though some have been outspoken supporters of such protests.

Some Eagles players did want to meet with Trump, and those are the players who were punished by the revoked invitation — not for kneeling during the anthem, not for disagreeing with Trump, but for merely being associated with people who disagree with Trump.

Trump could easily have welcomed those team members and taken a "that's their loss" attitude toward the rest. But instead, he washed his hands of anyone having to do with the team at all — even those who might be supportive of him.

In addition, he has given players no options to protest peacefully without receiving his presidential ire.

The NFL has ruled that players are not allowed to kneel during the national anthem without facing fines: They must either stand on the field or remain in the locker room while the anthem plays.

But Trump has stated at least twice that staying in the locker room is unacceptable.

If the erroneous capitalization doesn't make you shudder, the statements made in his tweets should. What Trump is saying is that football players must — not should, but must — "proudly stand for the National Anthem, hand on heart" or they will be publicly flogged in official presidential statements.

Some might suggest we ignore his rants, but a president's words matter — politically, socially, and historically.

Forced displays of patriotism aren't actually patriotism. They're the hallmarks of an anti-democratic regime.

Why is Trump giving this much attention to what football players do during games, anyway?

Supporters say it's because he loves his country, but anyone who's studied how a society slips into oppressive authoritarian regimes (see Madeleine Albright's new book) can recognize the writing on the wall.

Dictatorial power won't come to the U.S. overtly and immediately — it will come through the steady erosion of civil norms, the demonization of peaceful protesters, repeated attacks on the press, and fear-mongering.

It would appear we're right there, folks.

I'm sure some players will still kneel peacefully for criminal justice reform and other social justice issues and face the consequences. I just hope that more citizens, like the man pictured below who boldly knelt during the White House's alternative ceremony, will defy these attacks on the first amendment and join them.

Despotism only wins if we let it.