The nicest things that happened to Jon, Dany, and Arya on this week's 'Game of Thrones.' 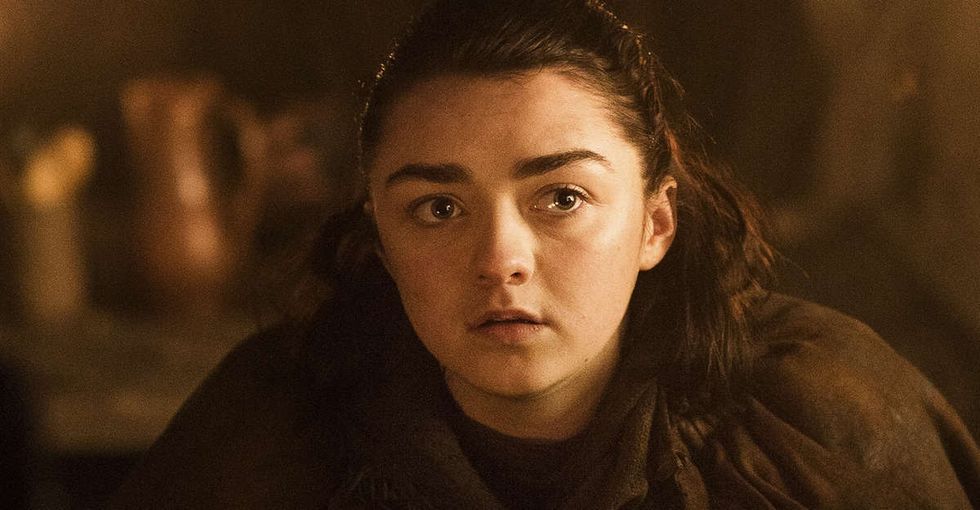 Welcome to "A Song of Nice and Fire," Upworthy's weekly "Game of Thrones" recap series. When we decided to recap of the most brutal show on TV, we realized that brutality is not really in our wheelhouse, so we tasked writer Eric March with hunting for the good, kind, wholesome GoT moments like a needle in a haystack. Here's what he found.

I see you giving me that side-eye, The Hound. Photo by Helen Sloan/HBO.

Frankly, I don't blame you for being skeptical. I was, too, when I first sat down to write about all the nice things that happened in the Season 7 premiere of "Game of Thrones." Everything about it seemed impossible (other than coming up with a snazzy, punny series title).

Trying to find lovingkindness in a show known for epic backstabbing, front-stabbing, and all-sides-stabbing is like trying to find new-wave music on "Empire," conservative opinions on "The Daily Show," or whatever doesn't happen on "Suits" on "Suits" (I don't watch "Suits").

Niceness just doesn't seem to exist in Westeros. And where and when it does, it's really not the point.

But I'm going to make a good-faith attempt. And miraculously, there was plenty of charity and goodwill to come by in last night's "Dragonstone."

Indeed, the seventh season premiere of "Game of Thrones" was practically overflowing with decency, tenderness, and respect.

You just have to squint at it the right way.

Perhaps after a glass of Arbor red or two.

The parade of benevolence began right away in the cold open, where Arya Stark, disguised as the (actually now) late Walder Frey, serves the entire Frey family a lovely meal. How nice! Sure, the meal was actually vengeance for the deaths of Arya's mother and brother who were murdered by Frey at the infamous Red Wedding, and yes, the Freys' murdered relatives were (per last season's finale) most likely the primary protein on offer, and, OK, yeah, the wine was definitely poison, but a house's gotta eat, and what is she, stone-hearted? Some sort of Stonehearted Lady? C'mon.

She threw them a dinner party. That's nice!

You're welcome. Photo by Helen Sloan/HBO.

Later, Arya does guest-star Ed Sheeran (Ed Sheeran) and the Assorted Lannister Soldiers a solid by not slitting their throats (at least not before the camera cuts away — a man cannot simply assume) after they offer her a bite of rabbit as well as several humanizing character anecdotes.

Not bad for some improvised mercy from the world's tiniest assassin!

Down at King's Landing, Jaime respectfully gives the equilibrium-challenged Euron Greyjoy props for burning the Lannister ships during one war or another, while helping plan a marriage of convenience for Cersei.

When it's going great. Photo by Helen Sloan/HBO.

Following some perfunctory bad-guy-on-bad-guy sizing-up, Greyjoy leaves, promising to return with a gift for Cersei that he hopes will persuade her to marry him. It's a little less genuinely nice and a little more Nice Guy (TM), because she did say no (a tactic? Possibly), but still. Crossing my fingers for an Edible Arrangement.

Up north, Jon takes pity on the funny-looking children of the less-than-perfectly-loyal Harald Karstark and Smalljon Umber by not taking their castles away and giving them to random other people, much to Sansa's chagrin and Littlefinger's ever-squirrely "I told you so."

Jon then pulls his sister aside for a post-meeting debrief and actually appears to listen to her, which is far more considerate than Ned or Robb Stark were to any female human before they were de-headed. And hey, Jon is also persuaded to throw out thousands of years of male-dominated military tradition to conscript women into his ragtag zombie-fighting army! Whether it's out of desperation or the memory of being on the business end of Ygritte's bow and arrow is debatable, but Lyanna Mormont is into it, so I'm calling it a nice win for Westerosi gender parity (yasss kween #feminism #ladycasualties).

Perhaps the only nice thing about the montage of Sam's drudgery in Oldtown is that it doesn't go on forever, even if it does feel that way.

No, thanks to whatever sound designer brought that visceral grossness to life. (Seriously.) (SERIOUSLY.) (OK, but actually respect and good work.)

Yeah, me too, Sam. Photo by Helen Sloan/HBO.

Yet in between cleaning bedpans and dishing out curiously similar-in-appearance soup, Sam does manage to figure out where all the dragonglass in Westeros is (shockingly, the one place on the continent with "dragon" in the name) and courteously send Jon a letter about it.

Also that one archmaester believes Sam about the White Walkers! That's nice of him, and really nice for Sam, even if the archmaester won't do anything about it. "The Wall has stood through it all, and every winter that ever came has ended," he reassures Sam. And if "Game of Thrones" has taught me anything in six seasons, he's definitely right, nothing bad will happen, the Wall will definitely continue to stand, and all will be well.

Elsewhere, holed up in a foreboding-looking abandoned inn with Beric Dondarrion and Thoros of Myr, The Hound does kindness about as well as The Hound can do and holds a funeral for the previous tenants of the place — an unfortunately dead and be-skeletoned father and daughter.

Sure, the fact that he stole their silver way back in Season 4 is why the pair starved to death in the first place, but this is "Game of Thrones," not "This Is Us," and feeling really really bad after half-knowingly condemning someone to a slow, painful death earns you a solid 4/5 on the Westerosi "Man's Humanity to Fellow Man" Scale.

Even though The Hound couldn't remember the proper burial rites, the fact that he buried them at all wasn't just a nice thing to do, but a nice bit of continued character growth for a man once defined solely by his size, distinctive scars, and curious aptitude for piercing body parts with sharp metal objects.

Good gazing, everyone. Let's take 10. Photo by Macall B. Polay/HBO.

In the final minutes of the episode, Daenerys and Tyrion finally arrive at the ancient Targaryen fortress on Dragonstone (finally!) to catch up on six years of silent walking, gazing, choral "oohs," and purposeful sand-feeling. Their scenes were so brief and largely visual that there's not much to say here. I guess it was nice of the Unsullied to hold open a series of large doors for Daenerys as she strode majestically up the mountain toward her destiny? That was cool of them.

Whoo, we made it! That's it for week one. See you next week, when hopefully Jaime gives Cersei a puppy, Jon and Sansa watch old home movies together, and the Wall definitely doesn't come down. That's ridiculous.