The internet's cracking up over this very telling pic of Doug Jones' son. 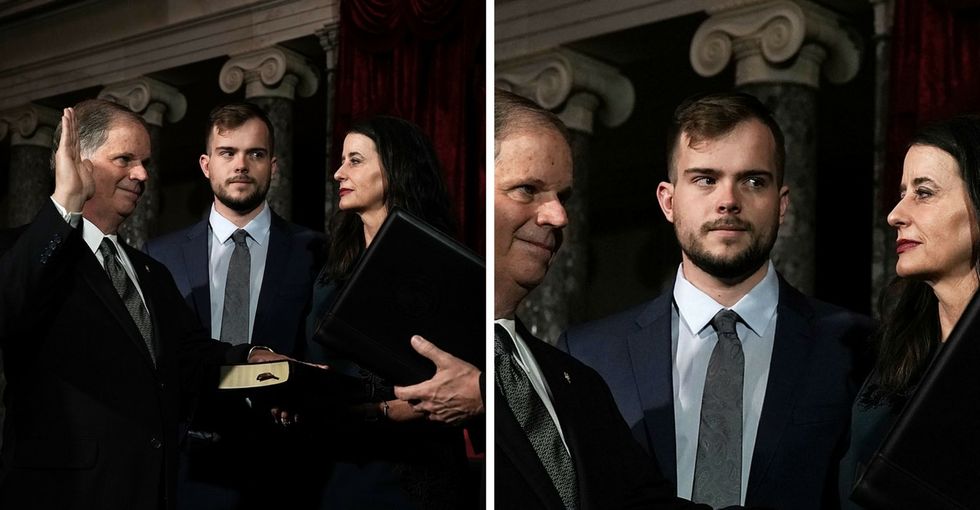 Jones, whose special election victory over republican Roy Moore flipped Alabama politics on its head, was joined by his wife Louise, and sons Carson and Christopher for the occasion.

The ceremony was relatively uneventful, all things considered. But one photo from the day began to ... catch people's attention.

The image captured Jones' son Carson appearing to give some some serious side-eye to Vice President Mike Pence during his father's swearing-in ceremony.

And that look truly is worth a thousand words.

No one confirmed Carson was staring maliciously at Pence, of course. In all likelihood, Carson's expression was nothing but fateful timing caught in the flash of the camera.

But of course, that didn't stop the internet from noticing.

In the blink of a (side-)eye, the photo blew up social media in spectacular fashion.

"Photo of the decade: Doug Jones being sworn in, while his openly gay son QUIETLY DISINTEGRATES THE SOUL OF MIKE PENCE," author Derek Milman quipped.

Carson glaring at the V.P. "is all of us," one user wrote.

"Doesn't get much better than this," wrote another.

"I thought Carson Jones ... was already hot," someone chimed in. "But this side-eye has me sweating."

"Someone buy the rights to adapt this staring contest between Carson Jones and Mike Pence," The Wrap's Matt Donnelly said.

Someone buy the rights to adapt this staring contest between Carson Jones and Mike Pence. https://t.co/wwAD9s1S6j
— Matt Donnelly (@Matt Donnelly)1515046142.0

Other users noted that — with or without the side-eye — it was great seeing the vice president swearing in a political opponent while the new senator's gay son stood proudly nearby.

Carson's viral photo is just the latest incident of internet mockery aimed at Pence from the LGBTQ community.

Just last week, a neighbor of Pence's Colorado vacation home hung a "Make America Gay Again" rainbow flag on a stone pillar near the vice president's driveway. The story quickly blew up on both LGBTQ and mainstream media.

In the spirit of Aspen, residents welcome Vice President Mike Pence, like everyone else, with a message of inclusiv… https://t.co/hLTD5khIy0
— Aspen Times (@Aspen Times)1514662200.0

"This is our dance party!" supporters yelled in the street. "Daddy Pence, come dance!"

The dance parties, rainbow flags, and side-eyes are all in good fun, of course — but LGBTQ people also understand that Pence's record on queer rights is no joke.

In the past, the vice president has supported conversion therapy — which promotes the lie that LGBTQ sexual orientation and/or gender identity and expression — particularly in children — can and should be changed through "therapy." Many consider it a form of child abuse that can ruin and even end lives.

Pence is fervently anti-marriage equality and opposed the repeal of "Don't Ask, Don't Tell." He allowed an HIV outbreak to flourish in rural Indiana as governor and once voted against measures to protect LGBTQ people from employment discrimination. Pence also claimed government "has no business" guaranteeing that transgender students have the right to use the bathroom that corresponds with their gender.

Now, as the second-most politically powerful person in the U.S., his abhorrent record on equal rights has alarmed LGBTQ advocates across the country. For queer people, his vision for the future of America is certainly worth resisting.