Someone asked ‘Why is it wrong to fly a straight flag?’ The response is a must-read. 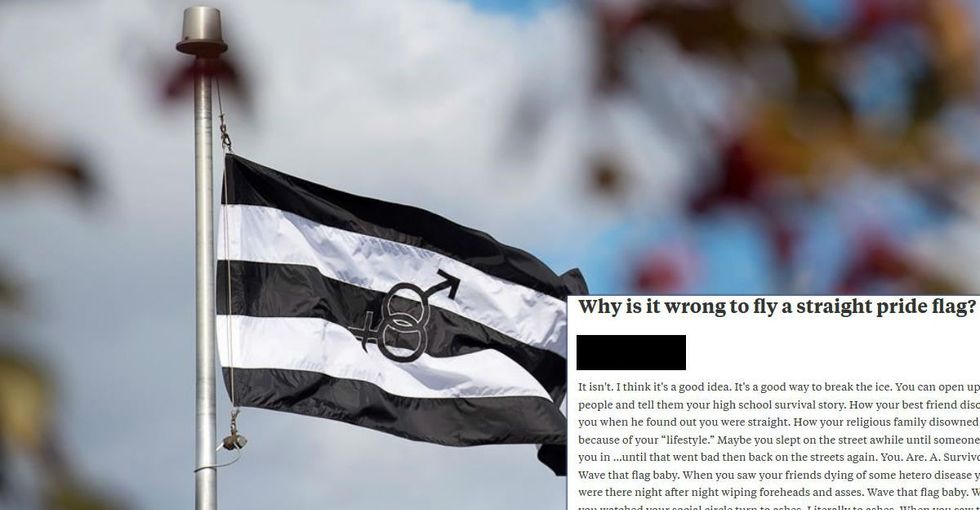 Not everyone needs a pride flag of their own. Be grateful for that.

With the ever-growing focus on identity politics, it's only natural that people from groups who have not traditionally been marginalized might begin to wonder where they fit in.

There are movements for gender, ethnic, sexual and religious minorities who are fighting for their rights, and often their very survival, on a daily basis. But what about everyone else?

Is it wrong for white people, heterosexuals and men to have “pride" in their identities?

On one hand, the short answer should be “no, there's nothing wrong with that." Even groups that aren't currently facing prejudice or threats to their identity have a heritage of struggle. Italian, Irish and Jewish Americans are largely lumped into “white culture" in 2018 but their legacy of oppression is very real and not as distant as some might think. And when pride is used for the betterment of all, it can be a powerful, community building tool.

And yet seemingly every example we see today of people wanting “pride" or more focus on powerful, non-marginalized groups seems to stem from those who would mask hatred and division under the guise of community.

Is there a single “white pride" group out there that isn't racist? If so, I certainly haven't heard of them.

This is exactly what happened during the 2016 Election when the forces behind Donald Trump's campaign were able to manipulate the real grievances of poor, white working men and women into a larger campaign of dissent and misinformation. White people, straight people and men do suffer just like everyone else -- but those who seem most focused on highlighting that suffering are doing so with dangerous motives.

Take for example the question over whether there should be a “straight pride" flag to match the iconic rainbow flag. Not only does it sound silly and unnecessary on the surface. If you have any doubts about the merits of a straight pride movement, just look at their flag. There's something inherently unseemly and menacing about it:

So, when someone on Quora posed the question, “Why is it wrong to fly a straight pride flag?" the response was something that is a must-read for everyone, but especially those still not sure why so many marginalized groups are using the power of identity politics to push for greater equality and systemic change:

Context is everything. Intent is everything. As a straight, white man it can sometimes feel like those who fall outside those labels are telling me that my life has been free of struggle and pain. And sure, maybe some people are sending that message and believe it to be true.

But the real message is that most people like me have never had to truly live outside the norms of a society, keeping our true selves hidden and wondering what the very real consequences might be if we were exposed.

Things are improving rapidly for a number of historically marginalized groups. There will be setbacks along the way and it's a learning process for everyone.

After that, maybe we can all wave one flag of victory together.